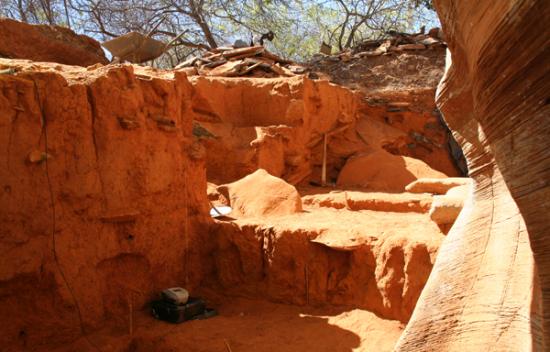 Excavations at this Brazilian site have yielded contested evidence of human settlers from at least 10,000 years before the appearance of Clovis hunters in North America.  C. Lahaye, IRAMAT-CRP2A, U. Bordeaux 3

Stone tools unearthed at a Brazilian rock-shelter may date to as early as 22,000 years ago. Their discovery has rekindled debate about whether ancient people reached the Americas long before the famed Clovis hunters spread through parts of North America around 13,000 years ago.

These relics of ancient South Americans add to evidence from nearby sites challenging the longstanding view of Clovis people as the first Americans (SN: 8/11/12, p. 15), a team led by geochronologist Christelle Lahaye of the University of Bordeaux 3 and archaeologist Eric Boëda of the University of Paris X reports March 4 in the Journal of Archaeological Science.

“We have new, strong evidence that the Clovis-first model is out of date,” Lahaye says.

Among other South American locations proposed as human settlements well before North America’s Clovis culture, the most controversial is Brazil’s Pedra Furada rock-shelter. There, archaeologists unearthed burned wood and sharp-edged stones and dated them to more than 50,000 years ago. Pedra Furada’s excavators regard the finds as evidence of ancient human hearths and stone tools. Critics, and especially many Clovis investigators, say the Brazilian discoveries could have resulted from natural fires and rock slides.

The new discovery came at Toca da Tira Peia rock-shelter, which is in the same national park as Pedra Furada. It also has drawn skeptics. The site’s location at the base of a steep cliff raises the possibility that crude, sharp-edged stones resulted from falling rocks, not human handiwork, says archaeologist Gary Haynes of the University of Nevada, Reno. Another possibility is that capuchins or other monkeys produced the tools, says archaeologist Stuart Fiedel of Louis Berger Group, an environmental consulting firm in Richmond, Va.

The age of Toca da Tira Peia artifacts has also drawn debate. Dating the artifacts hinges on calculations of how long ago objects were buried by soil. Various environmental conditions, including fluctuations in soil moisture, could have distorted these age estimates, Haynes says.

But archaeologist Tom Dillehay of Vanderbilt University in Nashville has seen some of the Toca da Tira Peia finds and regards them as human-made implements. Similar tools have been unearthed at sites in Chile and Peru, Dillehay says. His team previously estimated that people settled Chile’s Monte Verde site by 14,000 years ago, and possibly as long as 33,000 years ago.

An absence of burned wood or other finds suitable for radiocarbon dating at Toca da Tira Peia is a problem, because that’s the standard method for estimating the age of sites up to around 40,000 years ago, Dillehay says. But if people reached South America by 20,000 years ago, “this is the type of archaeological record we might expect: ephemeral and lightly scattered material in local shelters.”

Lahaye and Boëda’s team excavated Toca da Tira Peia from 2008 to 2011. Digging turned up 113 stone artifacts consisting of tools and tool debris in five soil layers. Using a technique that measures natural radiation damage in excavated quartz grains, the scientists estimated that the last exposure of soil to sunlight ranged from about 4,000 years ago in the top layer to 22,000 years ago in the third layer.

Lahaye says that 15 human-altered stones from the bottom two soil layers must be older than 22,000 years. The researchers plan to calculate when those artifacts were buried.