Tlachtga (Irlande): plan to get to heart of one of most mysterious sites 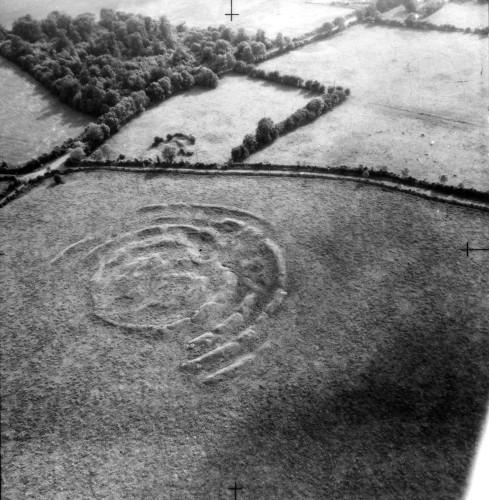 Tlachtga from the air - Cambridge University Collection of Aerial Photography

Have you ever wondered about how archaeologists discover the story of the past? In an exclusive series of three articles for TheJournal.ie, archaeologist Neil Jackman will take you behind the scenes of the exciting excavations at Tlachtga (The Hill of Ward), in Co Meath.

A team of volunteer archaeologists led by Dr Stephen Davis from UCD and site director Caitríona Moore, will attempt to discover the story behind one of Ireland’s most enigmatic sites. Tlachtga, also known as the Hill of Ward, is located just outside Athboy in Co Meath.

In this, the first of the three pieces, Neil explains why Tlachtga is such an important site to understand.

The earthworks of Tlachtga from the ground. - Stephen Davis

The site is a quadrivallate earthwork, meaning it has a series of four ditches and earthen banks. It is one of a very few known quadrivallate enclosures, along with The Rath of the Synods on the Hill of Tara and Rathra near Rathcroghan in Co Roscommon. These complex sites are thought to have been of extremely high status, and possibly originated in the Late Bronze Age or Early Iron Age as ceremonial enclosures.

The enigmatic site of Tlachtga is full of mythology and folklore. It is believed by some to be named after a druidess, the daughter of the mythical sun-god figure Mog Ruith (named in other sources as the executioner of John the Baptist). Alternatively Tlachtga is often translated to ‘earth spear’, or that the word ‘lacht’ appearing within the name may derive from a term for an ancient burial place.

The site is associated with the festival of Samhain, the precursor to modern Halloween. On Samhain Eve, it was believed that a great fire was lit on the site, summoning all ‘the priests, augurs and druids of Ireland to consume the sacrifices that were offered to their pagan gods’. It was decreed that all the fires within the Kingdom were to be extinguished, and rekindled using the sacred flame of Tlachtga.

Recently, thanks to the superb efforts of Joe Conlon and the Friends of Tlachtga, a modern recreation of the Samhain celebrations is carried out on Samhain Eve, and having attended it myself last year, I found it to be an atmospheric and fun evening.

There are few primary sources for the original activities at Tlachtga. However, in its later history, the site appears to been the setting for a number of dramatic events. In 908 AD the Annals of Ulster recorded the site being burned by an expedition of the Cenél Eógain.

In 1167, the last High King of Ireland, Ruaidrí Ua Conchobair held a great reform synod at Tlachtga. The records state that it was attended by 13,000 horsemen and all the provincial kings and key ecclesiastical figures, like St Laurence O’Toole, Archbishop of Dublin, Gelasius of Armagh and Cadhla of Tuam.

Shortly afterwards in 1172, Tlachtga was the setting for one of the most infamous and dramatic events during the Norman Invasions of Ireland. Tigernán Ua Ruairc, The King of Breifne (an ancient Irish kingdom that bordered Meath, and roughly covered the area of the modern counties of Leitrim and Cavan with a little bit of Sligo) was lured to Tlachtga to discuss the disputed border territory with Hugh de Lacy, the Norman Lord of Meath. Despite assurances of peace, Tigernán Ua Ruairc who had ruled Breifne for over forty years, was assassinated, cut down by De Lacy’s men, and his head was sent to the King in England.

In more recent history, Owen Roe O’Neill (in 1643) and some of Cromwell’s forces (in 1649) are believed to have camped on the Hill, and they may be responsible for some of the disturbance on the site. Somewhat more worryingly, the site also has some rather mysterious health and safety issues, a medieval text the Edinburgh Dindsenchas, records that the druidess Tlachtga buried the Roth Ramach – the ‘rowing wheel’ or ‘paddle wheel’ – a ‘rough, hairy, surly wheel’ that strikes dead all who see it, touch it or hear it on the hill. So my excavation gear will consist of a blindfold, gloves and earplugs!

The excavations are part of an ongoing examination of the site. The landscape around Tlachtga was studied by Dr Stephen Davis using LiDAR – a form of aerial survey that uses lasers to accurately record contours in the ground surface. The results show that the landscape around Tlachtga and Athboy has a wealth of archaeological sites, revealing previously unrecorded enclosures and settlements. 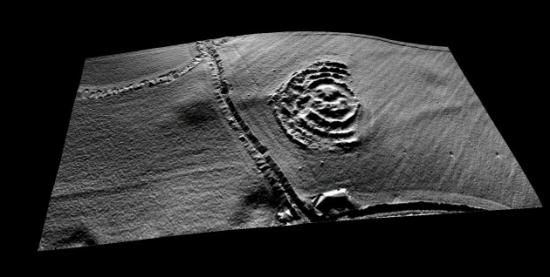 The LiDAR analysis was followed by a targeted geophysical survey on the monument itself. This revealed an incredibly complex series of ditches and earthworks that show that the site has multiple phases of construction.

The excavations will be a series of test-trenches that will be strategically placed according to the geophysical results. The primary aim of the excavation is to better understand the chronology of the site, to try to establish when it was first constructed, how many different phases of activity are present, and figure out when the site fell out of use.

It is hoped that the results of the first season’s excavations will give a clear baseline of information and it will help to formulate a series of questions to explore in future excavations. 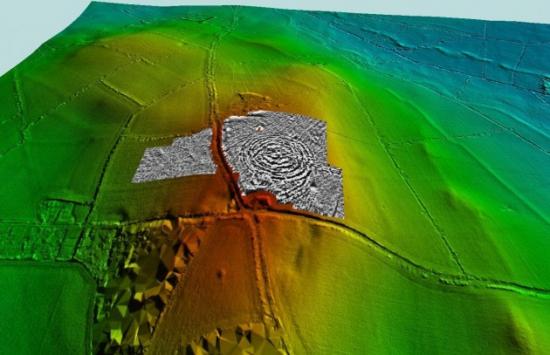 The geophysical survey of Tlachtga overlaid onto the LiDAR image. - Dr Stephen Davis and Chris Carey, funded by Heritage Council

The excavations aim to provide information to help to raise awareness of this truly remarkable archaeological site. The site is fully-staffed with experienced archaeological volunteers, though those with an interest in the site, or for those who would like to see how archaeology works, are more than welcome to visit during the excavations.

On Saturday 24 May you can learn more about the site and the excavation with a talk ‘The Hill of Ward: from earliest times to the present day’ by Dr Steve Davis at Ráth Chairn Community Hall at 2.30pm. The talk is followed by a walkabout on Tlachtga. This talk is organised in association with Comharcumann Ráth Chairn.