Evidence of Massacre in Ancient Turkey

Determining the social relationships between populations in the past can be difficult. Trading can be inferred from the presence of artifacts like pottery with foreign designs, or non-local foods. Warfare can be determined from the presence of mass graves or cemeteries of adult males displaying trauma, or well used weaponry. However, trauma is not always a sign of conflict with other populations. It can also reflect the normal struggles of daily life or interpersonal violence in the community. Skeletal collections with trauma found from the Neolithic period in Anatolia suggest that injury was caused by daily activities and lifestyle, rather than systematic violence. However, shortly after this period there is an increase in trauma associated with violence that may suggest an increase in stress within and between populations in this area. In order to examine this conclusion, a new article by Erdal (2012) looks at the skeletal remains of a potential massacre from the Early Bronze Age in Turkey. 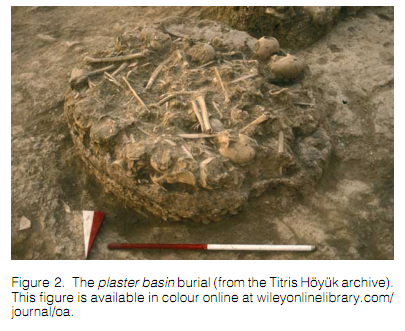 The human remains come from the site of Titris Hoyuk, and date to 2900-2100 BCE. The site grew very quickly in this period from a small farming community to an urban center with large walls. Within one of the house structures, a burial was found in a plaster basin beneath the floors. While the location and basin are not that unique, the state of the individuals is. Instead of the normal burials recovered from these basins, they found a large number of disarticulated remains with the crania placed at the top. Based on the strata of the burial, it is unknown whether this burial was created in a single moment or over time. Given there layout and the slight connection of some of the remains, it is more likely there was a single burial period rather than multiple. Since the bones were commingled, determining the number of individuals requires counting the number of repeating bony elements. The researchers looked at crania and the long bones. From this they argue there are a minimum number of 13 adult males, 3 adult females and 3 sub-adults. This burial dates to the end of this period, approximately 2200-2100 BCE. 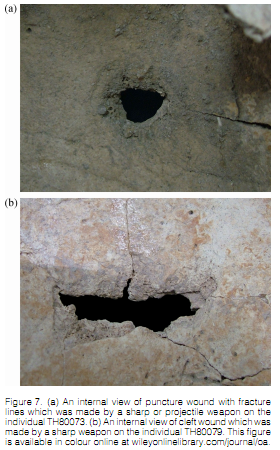 The trauma analysis was done using the cranial remains. Trauma was classified as premortem (before death), perimortem (sustained at death) or postmortem (after death). This is determined by looking at the wound for evidence of healing that would indicate it was sustained prior to death, or bright white coloration which means it was sustained after death (potentially caused by damage done during the excavation or collapse of the grave over time). Location of the trauma and appearance was recorded, as well as shape of the wound in order to determine potential weapons. When looking at the appearance and shape, Erdal (2012) recorded whether there was the appearance of radiating concentric lines indicative of blunt force trauma, or V shaped inward fractures indicative of sharp force trauma.

The results of the study showed that 11 of the 13 males had sign of one or more cranial traumas, only 1 female had signs of trauma, and there was no sign of trauma in the sub-adults. Of them, 13 of the 14 cranial traumas were unhealed and suggestive of perimortem damage. Most individuals suffered multiple wounds, resulting in a total of 26 unhealed cranial traumas for the entire sample. The most frequent appearance was inward beveling with concentric fractures radiating from the center, 23 of these were penetrating completely through the bone, and they were primarily found on the parietal bones. Comparing size of the wounds, Erdal (2012) found that they occurred in two specific clusters, which potentially means there were two types of weapon used.

Identifying violence in the past from skeletal remains can be difficult, and many archaeologists argue that the presence of embedded weapons is the only true indicator. However, trauma found on skulls caused by blunt or sharp weapons are a fairly good indicator of conflict, warfare or massacre according to Erdal (2012). The presence of such a high number of perimortem wounds, all in the same area and occurring on the majority of individuals in a single mass grave all point to the conclusion that their deaths, or at least injuries, were not accidental. Combining this with the evidence of fortifications around the city suggests that these individuals were killed by intruders rather than interpersonal violence. Comparing the two types of injury clusters with weapons from this period leads to the conclusion that they were caused by battle axes in the case of the larger injuries, and dagger or spears for the smaller ones.

Erdal (2012) aruges that “the frequency of perimortem trauma increases during periods of environmental deterioration, population growth, political breakdown and competition over resources while sub-lethal cranial trauma are observable during all periods”. Since Turkey was going through a period of environmental, as well as cultural, change, it is likely that violence was one of the consequences. Combining this data with other sites from this period in Turkey may reveal an overall trend of increased violence in the Neolithic to Bronze Age transition. The conclusion is based on a fairly extensive amount of evidence, and is argued very well. There is even a discussion of the meaning behind the plaster basins the individuals were found in. This is a good example of combining bioarchaeology with the contextual evidence, both in the grave and mortuary setting, but also the broader cultural and environmental context.