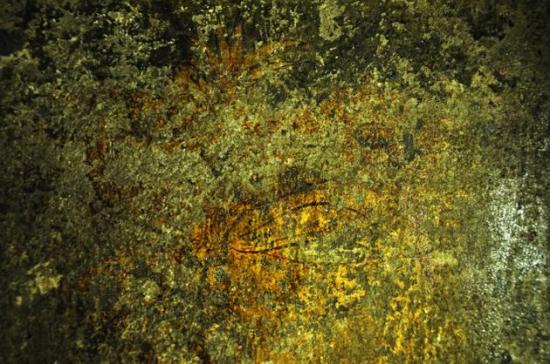 The paintings are possibly the work of Chola King Parantaka – I. One of them depicts Lord Shiva adorned with gold ornaments on his chest and waist. There are two people on either side of Lord Shiva, showering flowers on him. Photo: State archaeology department

A photograph taken by a research scholar of the State archaeology department on her mobile phone has helped unearth rare Chola-era paintings at an Adipuriswarar (Lord Shiva) temple in Tiruvottiyur on Monday.

The findings, archaeologists said, were rare as this is the first time paintings of the Chola era have been discovered in Chennai, which experts believe was only a peripheral part of the ancient dynasty.

The research scholar, 28-year-old Deepika Shankaralingam, is working on a study of pillars in temples that belong to various eras, including those of the Pallavas, Cholas, Vijayanagara and the Nayaks. As part of her research, she, along with her co-researcher Vijay Sundaraman, had gone to a ninth-century A.D. temple in Tiruvottiyur. There, they found an algae-like substance on the wall near the main deity, Lord Shiva.

“When we first saw it, we thought it was some kind of dirt on the wall, but when we looked closely we were stunned to see a faded painting of Lord Shiva in the standing position,” said Ms. Shankaralingam, who has completed a master’s degree in archaeology from Pune-based Deccan College.

Immediately, a team of archaeologists and epigraphists led by S. Vasanthi, commissioner-in-charge of the archaeology department arrived at the temple, and having inspected the wall, found that the painting, and others around it, were genuine. They were confirmed as belonging to the Chola era, due to their colour and unique style. The colours yellow and red, a senior archaeologist said, were predominant in Chola paintings, while in those of the Vijayanagara era, blue — especially peacock blue — was the primary colour.

While the panel or framework of the paintings is about 8.5 feet high and 1.5 feet wide, the visible portion of the paintings only stretch to 3.5 feet on the wall. An archaeologist said the painting was possibly the work of Chola King Parantaka – I (907– 951 A.D) and depicts Lord Shiva adorned with gold ornaments on his chest and waist.

A unique feature of the painting, he said, was the style of the head-gear in it – a knot with flowers atop it.

There are two other persons (gender not determined) on either side of Lord Shiva in the painting, but above him. They appear to be placing flowers on Lord Shiva. “The painting may depict a wedding scene as Lord Shiva is wearing gold and being showered with flowers,” said senior epigraphist, P.G. Loganathan.

The archaeology department will now excavate the entire wall from the temple in order to determine if there are more faded paintings on it, an official said.

The significance of the paintings, according to archaeologists, lies in the fact that during the Chola era, Tiruvottiyur and its adjoining area Thondai Mandalam, were considered a buffer area on the northern portion of the kingdom, between the warring dynasties – the Chalukyas and the Cholas, in ninth century A.D.

As a result, these areas were very well maintained by the Cholas to ensure that they did not fall into the hands of their rivals, the Chalukyas. And so, the localities were well kept and beautified and temples here were elaborately painted.