The panels were discovered at the archaeological site of Tipan Chen Uitz in Belize in 2015, dating from about 700 AD. They are the first panels relating to ballplayers found in Belize. The images have short and complete hieroglyphic captions.

The first panel shows a ballplayer, recognisable from his pose and protective belt. He plays with a large, circular ball. In his left hand he holds an elaborate fan. It would have been almost 1.4m wide and 70cm high originally, but about 10% of the image has been lost. It appears that the panel was deliberately defaced, with one figure in particular being very scratched.

The panel has the inscription "nine handspan ball", suggesting a measurement of the circumference of the ball. Elsewhere, the player appears to be given the unusual nickname "Waterscroll Ocelot". On the second panel, which is slightly smaller, also shows a figure in the thick of the action of a game. Again, the area around the figure's face has been hammered off.

Ballgames were important in the social and political spheres of the Mayan culture, the authors of a new study on the panels write in a study published in the journal Antiquity.

"Iconographic and glyphic analysis of these panels within a regional context provides new insights into large-scale socio-political relationships, demonstrating that the ballgame was an important means and mechanism for macropolitical affiliation in the Maya Lowlands," the authors, led by Christopher Andres of Michigan State University, write in a study on the panels.

The game was by no means limited to the common Mayan people. Nobility and local rulers were often depicted playing, and foreign dignitaries were also frequently depicted in images and artwork dating from the time.

"These ballplayer panels may reflect a greater system of allegiances cemented in part by public performances involving [land owners] and overlords participating in the ballgame," the authors write.

It's hoped that further study of these panels could elucidate more of the socio-political landscape of the more distant and poorly recorded elements of Mayan history. 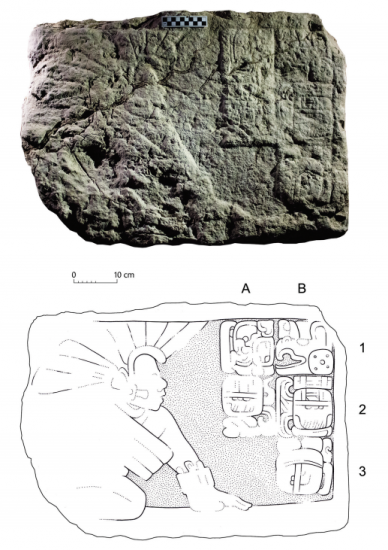 The panel shows a ballplayer holding his fan.Christophe Helmke / Antiquity 2017

Elites and rulers are known to have played the ballgames.Christophe Helmke / Antiquity 2017