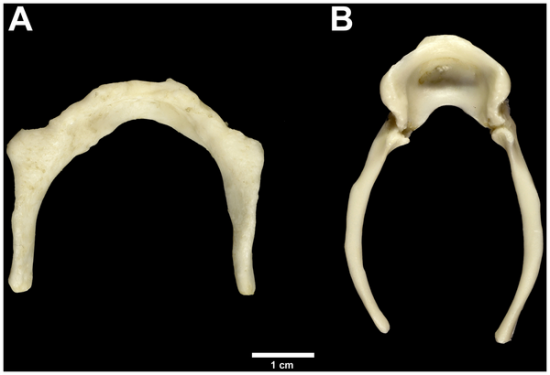 Male Homo sapiens and Pan troglodytes hyoid bones. Note that the human hyoid (A) lacks the large and distinctive bulla of the chimpanzee hyoid (B). Specimens are research quality casts numbers 844 and 837 held at the University Museum, Trieste. doi:10.1371/journal.pone.0082261.g001

Neanderthals spoke in languages similar to those used by modern humans, researchers studying a 600,000-year-old hyoid bone have said.

Last year, scientists said a tiny bone discovered in 1989 in Israel showed how Neanderthals could talk like modern humans.

Scientists from the University of New England (UNE) in Australia, writing in the journal PLoS ONE said 3D x-ray imaging of the bone indicated it was highly likely early man had the ability to carry out complex speech.

Building on their evidence, Professor Stephen Wroe, a zoologist and palaeontologist from UNE, together with an international team of scientists, said the Neanderthal hyoid bone was virtually identical to that found in a modern-day human.

"To many, the Neanderthal hyoid discovered was surprising because its shape was very different to that of our closest living relatives, the chimpanzee and the bonobo," Wroe said. "However, it was virtually indistinguishable from that of our own species. This led to some people arguing that this Neanderthal could speak."

Previously, scientists had believed Neanderthals had the physical ability to speak, but lacked the cognitive capability to do so. It was thought the ability to speak evolved around 100,000 years ago.

However, Wroe and the team of scientists say this is not the case: "The obvious counterargument to this assertion was that the fact that hyoids of Neanderthals were the same shape as modern humans doesn't necessarily mean that they were used in the same way. With the technology of the time, it was hard to verify the argument one way or the other.

"By analysing the mechanical behaviour of the fossilised bone with micro x-ray imaging, we were able to build models of the hyoid that included the intricate internal structure of the bone.

"We then compared them to models of modern humans. Our comparisons showed that in terms of mechanical behaviour, the Neanderthal hyoid was basically indistinguishable from our own, strongly suggesting that this key part of the vocal tract was used in the same way.

"From this research, we can conclude that it's likely that the origins of speech and language are far, far older than once thought."