The red pin shows the location of Timna Valley, in present-day southern Israel. 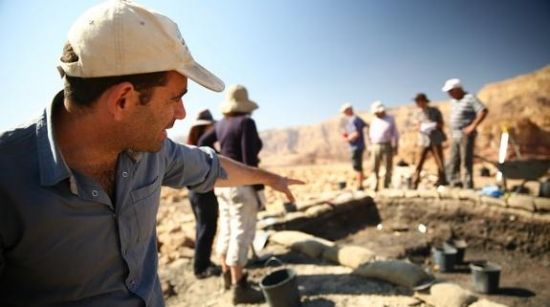 In this photo from 2013, archaeologist Erez Ben-Yosef points to a trench at Slaves' Hill, a copper smelting camp in Timna Valley.

Metalworkers who did skilled labor at biblical-era copper mines in modern-day Israel were rewarded for their efforts with well-rounded meals, new research suggests.

The metalworkers' diet included good cuts of sheep and goat, as well as pistachios, grapes and fish brought to the middle of the desert from the Mediterranean, according to an analysis of ancient leftovers at "Slaves' Hill," a mining camp in Israel's Timna Valley.

The findings imply that "Slaves' Hill" might be a misnomer; the people who manned the furnaces probably weren't slaves, but rather, they held a higher status because of their craft, archaeologists say.

"Somebody took care that these people were eating well," said Erez Ben-Yosef, an archaeologist from Tel Aviv University.

Since 2012, Ben-Yosef has been leading an archaeological expedition in the heart of Timna Valley, the second biggest source of copper in the southern Levant region. (The biggest is Faynan, farther north in Jordan.) People have taken advantage of the copper deposits at Timna for millennia. There are dozens of smelting sites and thousands of primitive mining pits clearly visible in the region today. And the area is still used for copper production; the Mexican mining giant AHMSA has a stake in the region.

Recently, the Timna Valley team has taken a crack at Slaves' Hill, a smelting factory on top of a mesa that was in operation during the 10th century B.C., the biblical era of King Solomon. Today, there are traces of ancient furnaces at the site and lots of slag, which is the rocky material that's left over after metal is extracted from its ore. (Essentially, it's manmade lava.)

When the famous biblical archaeologist Nelson Glueck explored the region in the 1930s, he named this hilltop site Slaves' Hill, assuming that its fortification walls were intended to keep enslaved laborers from running off into the desert.

"When he saw this very harsh environment, he assumed that the labor force had to be slaves," Ben-Yosef told Live Science.

But the findings of the Central Timna Valley Project paint a different picture. Ben-Yosef and his colleague Lidar Sapir-Hen, another archaeologist at Tel Aviv University, looked at animal remains from Slaves' Hill and found mostly sheep and goat bones, many with butchery marks. This supports the idea that this mining camp relied on livestock for food. Bones from the meatiest parts of the sheep and goats were found near the smelting furnaces.

The archaeologists said they think that whoever was running this mining camp was importing food and saving the best cuts of meat for the metalworkers, not the people who were doing auxiliary tasks, such as cooking the food, crushing the ore and preparing the charcoal, nor slaves who might have been working in the actual mines.

"What we found was that the guys working at the furnace, which is supposedly very hard work with very high temperatures above 1,200 degrees Celsius [above 2,200 degrees Fahrenheit], these people were treated the best," Ben-Yosef said. "They were highly regarded. It goes together with the need for them to be highly specialized and very professional."

"If they had mistaken something, the entire process would fail," Ben-Yosef said. "On the other hand, if they do succeed, they are the guys who know how to make metal from rock."

The site has a complicated scholarly history. When Glueck first explored the region, he thought he was looking at Iron Age mines that fueled King Solomon's fabled wealth.

Later research then cast doubt on Glueck's interpretation. In 1969, an Egyptian temple dedicated to the goddess Hathor was discovered in Timna Valley. Archaeologists at the time took this as evidence that mining in the area was controlled by Egypt's New Kingdom during the Bronze Age, a few centuries earlier than the supposed reign of King Solomon.

When Ben-Yosef's team revisited the site, they took carbon dates at Slaves' Hill, and found that most artifacts date to the 10th century B.C., when the Bible says King Solomon ruled. Still, there is no evidence linking Solomon or his kingdom to the mines (and little evidence outside of the Bible for Solomon as a historical figure). One theory is that the mines were controlled by the Edomites, a semi-nomadic tribal confederacy that battled constantly with Israel.

Last year, the team's research at Timna Valley added another layer of nuance to the biblical narrative. Ben-Yosef and Sapir-Hen published an analysis of camel bones at Slaves' Hill and other surrounding sites. The age of the earliest bones supports the theory that camels were not introduced to the region until at least the early Iron Age — in contradiction to the Old Testament, which refers to camels as pack animals as far back as the Patriarchal Age, which is thought to be around 2000 B.C.

The latest findings of the Central Timna Valley Project were detailed in the September issue of the journal Antiquity and were presented here last week at the annual meeting of the American Schools of Oriental Research. The team will return to Timna Valley in February 2015. Ben-Yosef said that the researchers will investigate the smelting technology of the Egyptians who worked in the region during the Bronze Age, and will explore the actual Iron Age mines.