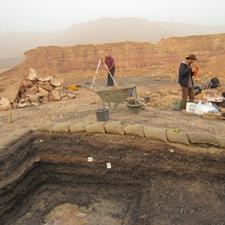 The stratigraphy of the Slaves' Hill, resulting from 150 years of copper production peaking in the 10th century BCE

New findings from an archaeological excavation led this winter by Dr. Erez Ben-Yosef of Tel Aviv University's Jacob M. Alkow Department of Archaeology and Near Eastern Cultures prove that copper mines in Israel thought to have been built by the ancient Egyptians in the 13th century BCE actually originated three centuries later, during the reign of the legendary King Solomon.

Based on the radiocarbon dating of material unearthed at a new site in Timna Valley in Israel's Aravah Desert, the findings overturn the archaeological consensus of the last several decades. Scholarly work and materials found in the area suggest the mines were operated by the Edomites, a semi-nomadic tribal confederation that according to the Bible warred constantly with Israel.

"The mines are definitely from the period of King Solomon," says Dr. Ben-Yosef. "They may help us understand the local society, which would have been invisible to us otherwise."

Now a national park, Timna Valley was an ancient copper production district with thousands of mines and dozens of smelting sites. In February 2013, Dr. Ben-Yosef and a team of researchers and students excavated a previously untouched site in the valley, known as the Slaves' Hill. The area is a massive smelting camp containing the remains of hundreds of furnaces and layers of copper slag, the waste created during the smelting process.

In addition to the furnaces, the researchers unearthed an impressive collection of clothing, fabrics, and ropes made using advanced weaving technology; foods, like dates, grapes, and pistachios; ceramics; and various types of metallurgical installations. The world-renowned Oxford Radiocarbon Accelerator Unit at the University of Oxford in England dated 11 of the items to the 10th century BCE, when according to the Bible King Solomon ruled the Kingdom of Israel.

The archaeological record shows the mines in Timna Valley were built and operated by a local society, likely the early Edomites, who are known to have occupied the land and formed a kingdom that rivaled Judah. The unearthed materials and the lack of architectural remains at the Slaves' Hill support the idea that the locals were a semi-nomadic people who lived in tents.

The findings from the Slaves' Hill confirm those of a 2009 dig Ben-Yosef helped to conduct at "Site 30," another of the largest ancient smelting camps in Timna Valley. Then a graduate student of Prof. Thomas E. Levy at the University of California, San Diego, he helped demonstrate that the copper mines in the valley dated from the 11th to 9th centuries BCE — the era of Kings David and Solomon — and were probably Edomite in origin. The findings were reported in the journal The American Schools of Oriental Research in 2012, but the publication did little to shake the notion that the mines were Egyptian, based primarily on the discovery of an Egyptian Temple in the center of the valley in 1969.

The Slaves' Hill dig also demonstrates that the society in Timna Valley was surprisingly complex. The smelting technology was relatively advanced and the layout of the camp reflects a high level of social organization. Impressive cooperation would have been required for thousands of people to operate the mines in the middle of the desert.

"In Timna Valley, we unearthed a society with undoubtedly significant development, organization, and power," says Ben-Yosef. "And yet because the people were living in tents, they would have been transparent to us as archaeologists if they had been engaged in an industry other than mining and smelting, which is very visible archaeologically."

Although the society likely possessed a degree of political and military power, archaeologists would probably never have found evidence of its existence if it were not for the mining operation. Ben-Yosef says this calls into question archaeology's traditional assumption that advanced societies usually leave behind architectural ruins. He also says that the findings at the Slaves' Hill undermine criticisms of the Bible's historicity based on a lack of archaeological evidence. It's entirely possible that David and Solomon existed and even that they exerted some control over the mines in the Timna Valley at times, he says.

Dr. Ben-Yosef is leading another dig at the Slaves' Hill in the winter and is looking for volunteers.