The researchers' goals were to create a precise model that will allow an objective study of the engraving to gain a better understanding of the people who made it. Using an innovative three dimensional technology, researchers have now made the Timna Valley Park the first setting in Israel where a large-scale rock engraving was scanned. . (photo credit:HEBREW UNIVERSITY INSTITUTE OF ARCHAEOLOGY)

About 30 km. north of Eilat, lying in Israel’s southern Arabah plain, is a gold and red sandy valley with an iconic horseshoe shape. In the middle of this valley stands the Timna Mountain, consisting mostly of igneous rocks formed by the solidification of molten rock.  Bordered on three sides by mountains of dolomite, limestone and Nubian sandstone, the picturesque Timna Valley has attracted human attention for about 6000 years — from the Chalcolithic Period (4th millennium BCE) up to the Muslim Period (7th to 19th centuries CE) — mainly due to the abundant copper ore concealed within its layers of rock.

Over the years, different ethnic groups took advantage of this rich quarry, at times cooperating across ethnic lines. Among the archaeological finds they left behind are mining and smelting camps, a shrine to the Egyptian goddess Hathor dating to the New Kingdom Period (14th-12th centuries BCE), and beautiful rock engravings allowing us to study the identity, culture, and beliefs of these ancient miners.

In 1959, Israeli scholar Beno Rothenberg began an archeological survey and excavation project in the Timna Valley. Among the artifacts he studied is the “Chariots” engraving on the wall of a ravine five meters wide and nine meters long, depicting wildlife and human activity. 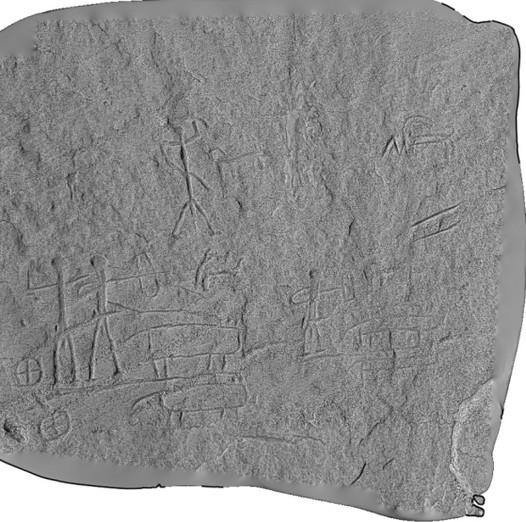 Rothenberg was the first Israeli scholar to study this engraving and he divided it into two main scenes. The first scene portrays Egyptian warriors wielding New Kingdom type battle axes on top of war chariots, inspiring the engraving’s “Chariots” name. The other scene depicts hunters wearing tasseled kilts and equipped with bows and hilted swords, along with a variety of animals such as ibexes, oryxes, ostriches, leopards and cheetahs common to the region at the time. Rothenberg interpreted the hunters as Midianites, who were, he said, part of the “sea people” originating from the Aegean Sea.

Importantly, this engraving bears witness to the lives of workers from different ethnic origins in the Timna mines. The two scenes point to a cooperation between Midianites and Egyptians in the copper mining operation during the 12th-14th centuries BCE.

But like so many archaeological finds, this engraving presents many unanswered questions. For example, the different ways of illustrating figures within the hunters group could imply, as some scholars suggest, that there are actually more than two ethnic groups presented in the engraving.

Until now, there was no way to probe deeper into the secrets of the engraving to validate, refute and add to the interpretations of previous scholars. But new technologies are now allowing researchers to further investigate the engraving’s subtle details.

Using an innovative three dimensional technology, researchers have now made the Timna Valley Park the first setting in Israel where a large-scale rock engraving was scanned. 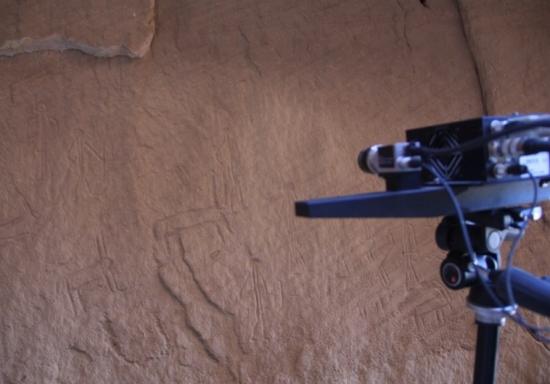 Researchers have now made the Timna Valley Park the first setting in Israel where a large-scale rock engraving was scanned.

The project was headed by a team from the Computerized Archaeology Laboratory in the Institute of Archaeology at the Hebrew University of Jerusalem. The laboratory combines advanced mathematics and computing methods with modern, high-precision scanners to provide digital three dimensional models of archaeological finds. Dr. Leore Grosman directed the project by in collaboration with Assaf Holzer and the Timna Valley Park team, who provided important help and support.

The researchers’ first goal in scanning the engraving was to create a durable, long-lasting and accurate 3D model in case of future damage to the original. Their other goal was to create a precise model that will allow an objective study of the engraving, in order to gain a better understanding of the people who made it.

One area of inquiry for this research is the different dimensions of some of the carvings, which could point to the use of a variety of tools. This raises the possibility that the engraving was continually worked on over several periods or that the original artists used a special set of tools for this engraving.

Another interesting question relates to a figure previously pointed out by the scholar Beno Rothenberg. This lonely character, situated at the far right end of the engraving, has distinctive large fingers which all the other figures lack, and is holding one hand up. Rothenberg interpreted this figure as a divine Midianite entity.

The laboratory team has identified a similar figure, also depicted on its own at the other side of the engraving, bearing a similar pose. This second figure lacks the distinctive fingers, although this might have been caused by erosion. If indeed the two figures portray the same entity, the carving of it on both ends of the engraving might have artistic and ritualistic significance.

Further research will help answer these and other questions about the carving technique and meaning of the Chariots engraving. With the application of this new technology, the ancient art form seen in this and other engravings will reveal more hidden secrets and teach us more about our ancient past.