Time to revise our view of Viking ships?

Many reconstructed Viking ships have quadratic sails, but a Danish archaeologist doubts that all the ships looked that way. 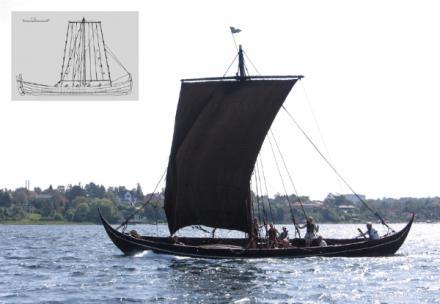 A full-scale replica of wreck 3 from Skuldelev. Inserted is a drawing of a 19th century fishing vessel from Norway. (Illustration: Ole Kastholm/Bernhard Færøyvik)

When we see a reconstruction of a Viking ship at a museum or anywhere else, we may not be seeing a true picture of the past.

Old inscriptions on rune stones and coins depict ships with low and broad sails, yet most reconstructions are fitted with taller and narrower sails.

This was one of the points raised by Ole Kastholm, curator at Roskilde Museum at a recent archaeological conference on the Viking Age held at Copenhagen University.

Kastholm believes we should take a closer look at the pictorial material from Viking Age rune stones, picture stones and coins when we reconstruct Viking ships.

“On all the imagery we have from those days, the ships are depicted with much broader sails. This has been left out in the reconstruction, and when you leave out source material, people get the wrong idea.”

Having analysed pictures of ships on coins and graffiti from the Viking Age and on picture stones on the Swedish island of Gotland and elsewhere, he could see that the depicted sails did not have the same shape as the ones on the reconstructed ships.

Are the old pictures really of any use?

Vibeke Bischoff, a ship reconstructor at the Viking Ship Museum in Roskilde, has been involved in the reconstruction of several Viking ships. 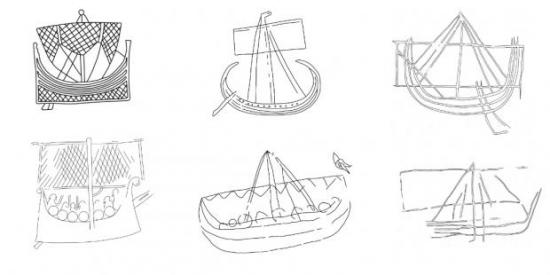 A selection of Scandinavian ship pictures from rune stones, coins, picture stones and graffiti, dated to the period from the 8th to the early 12th century. (Illustration: Ole Kastholm)

She says that the pictorial material was taken into consideration, but she did not believe the old pictures were sufficiently realistic to say anything about the proportions of the ships.

”We have used the pictorial material e.g. to interpret how they rigged the sails, but we didn’t use it for our proportioning. On the old illustrations on picture stones and coins, the height of the mast, the sail and the people on board are severely over-proportioned,” she says.

“That’s why we can’t use the illustrations to tell us anything about how broad the sails were on the Viking Ships.”

Bischoff believes the illustrations were intended to tell a story rather than show accurately-proportioned depictions of real ships.

“When you see a Viking ship approaching the shore, the first thing you see is the large sail,” she says. “If I were to portray such a large ship, that’s the element I would exaggerate, and then I would also draw the ship from the side to show how long it was and how many people were on board.”

Museum curator Kastholm argues that since the pictures from the Viking age cover a period of 400 years, it’s hard to believe that all of the pictures have portrayed an incorrect image or have been intended to tell the same story.

We can only interpret

Bischoff agrees that it is remarkable to see so many pictures portraying the broad sails:

“That’s odd, but it’s also strange that the masts on the pictures are so tall. The fact is that we have never found any sails form the Viking Age, so we cannot know what they looked like. All we can do is to interpret.”

Since there are no finds of Viking ship sails, the researchers look to other sources such as shipwrecks and the pictures and texts that have survived.

Bischoff explains that many preserved ships from the Viking Age have visible traces of sails and rigging, and they show no signs of the very broad sails portrayed in the old pictures.

The hulls from the old Viking ships share many features with the Norwegian square-rigged vessels from the 19th century, she says. That’s what the sails on modern Viking ship reconstructions are based on, although there are slight differences in the design.

The Norwegian ships had trapezoidal sails, which the researchers at the Viking Ship Museum do not believe the Vikings used.

“In my opinion, when people come and see our ships, it’s fair for them to assume that’s what a Viking ship looked like,” says Bischoff.

We trust the reconstruction

”There is great power in a reconstruction. You are helping to decide how others will form a conception of the Viking Age. Reconstructions work on us because they are physically present,” he says.

“As a communication tool, the ship is a convincing reconstruction, because it works. The ship is complex. It must not only be able to sail, but it has to sail well, since the crew’s life could depend on it. And when the reconstruction works too, it affects people in some way.”

Kastholm therefore also thinks it is important to adopt a subtle approach to the source material.

Bischoff agrees and is keen to point out that all accessible material is taken into consideration when the researchers at the Viking Ship Museum try to reconstruct the Viking ships’ sails and rigs as credibly as possible.

The answer may be buried in Jutland

What the sails actually looked like remains a mystery since no Viking ship has been found with the sail intact.

However, in 1996 a Viking ship was found buried underground in Aggersund on the Danish peninsula of Jutland. This ship may provide us with the answer, because it is turned on its head. This, archaeologists believe, could mean that the upper parts of the ship may be preserved.

On other finds of shipwrecks, only the bottom of the ships’ hull remains. But it’s the upper strakes that tell us about the appearance of the sails.

When archaeologists find a hull from a Viking ship, they can usually determine with relative ease the location of the mast. But it’s a lot more difficult to say anything about the sail.

The shipwreck in Aggersund has been safeguarded, so that the surrounding soil will not erode before it’s dug up. No decision has yet been made on when the excavation will take place.