Tilaurakot (Népal): the city was bigger and older than it was thought to be 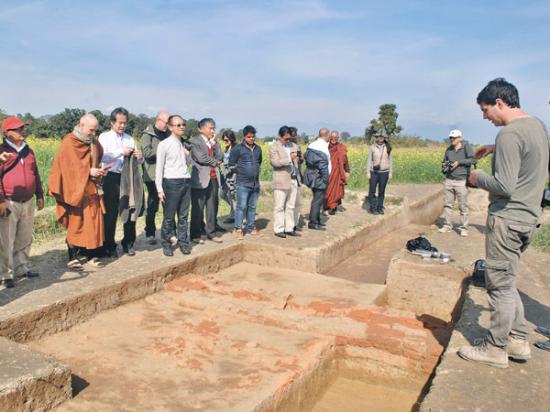 And what a treasure hunt it has turned out to be for all of them. Professor Robin Coningham from the University of Durham, one of the leading researchers involved in the project, is elated that this excavation has led to the discovery of more artifacts than had been previously assumed existed at the site.

The archaeologists are excavating four different sites in Tilaurakot. The excavation began in earnest after the geophysical survey carried out last year showed the presence of an ancient settlement there. The archeologists first dug a trench about 30 metres away from the eastern gate of the palace; then the second and the third trenches were dug on the northern side of the Samayamai Temple; and the last trench just outside the palace complex, near the Kanthak Stupa.

The excavation comprises a lot more than just digging trenches and sifting through the dirt. Archaeologist Koshraj Acharya, who is part of the team, says that the kind of cutting-edge technology used in this project is unheard of in Nepal, much less used.

Before the excavation began, researchers and archaeologists mapped different sites in Tilaurakot using Global Information System (GIS). They then collected soil samples from seven metres underground, using the Augre Core technique, which involves drilling the earth with a metal pipe. The samples were sent to labs abroad, where they are being studied to determine how the land was used in different phases of time.  After that, two British geophysicists, Duncan Hale and Pateicia Voke, conducted a geophysical survey of the land. During the survey, they sent ground radar waves two metres under the surface to see what lay underground.

The excavation near the Samayamai Temple unearthed 20 post holes (remains of buried wooden pillars) dating back before the time of the Buddha. Similarly, another excavation carried out near the Kanthak Stupa led to the discovery of a huge monastery complex. The scientists also unearthed 498 punch-marked Mauryan silver coins. According to archaeologist Bashant Bidari, the silver coins found at the site date back to the 3rd century BC.

These discoveries have lain to rest the conclusion that Indian archaeologist Debala Mitra had come to, after the 1962 excavation done around the northern walls of Tilaurakot. She had said that according to her research, the ruins found in Tilaurakot didn’t go further back than the 2nd century BC.

The excavation may also lead to a change in how we have understood Tilaurakot’s history up to now. The settlement, says Prof Coningham, might have been a well-developed city long before the birth of the Buddha. The findings show that the city, even back then, had a well-designed road network, sewer canals and houses (which were built on the sides of the road). Wells were dug in different locations in the city to fulfill the demand for water. The entrance to the Tilaurakot palace had moats dug around it, while the walls of the palace were properly fortified. He further says that around the palace were sites allocated for industries and monasteries.

Interestingly, this ancient city also seems to share a lot of common features with other ancient cities like Takshasila (Pakistan) and Allahabad (India), leading the archaeologists to speculate that there must have been some kind of contact between these cities.

The second stage of excavation will go on until the end of February. The excavation has been carried out with aid from the Japanese government’s Japan Aid and Trust.