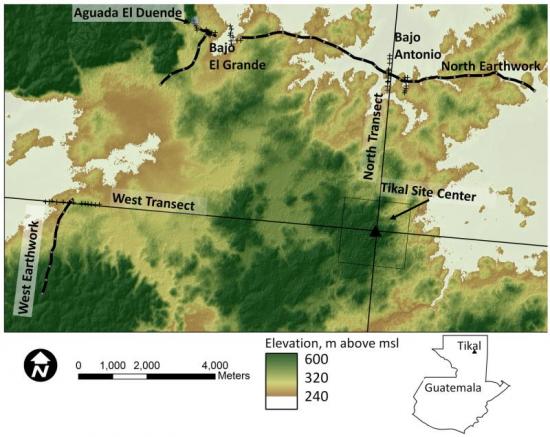 Map of Tikal National Park, Guatemala, with the soil pedon locations identified with crosses. Elevation shades are in meters above mean sea level.

After emerging sometime before 1000 BC, the Maya rose to become the most advanced Pre-Columbian society in the Americas, thriving in jungle cities of tens of thousands of people, such as the one in Guatemala's Tikal National Park. But after reaching its peak between 250 and 900 AD, the Maya civilization began to wane and exactly why has been an enduring mystery to scientists.

Writing in the Nov.-Dec. issue of the Soil Science of America Journal (SSSA-J), an interdisciplinary team led by Richard Terry, a Brigham Young University soil scientist, now describes its analysis of maize agriculture in the soils of Tikal. Not surprisingly, the study uncovered evidence for major maize production in lowland areas, where erosion is less likely and agriculture was presumably more sustainable for this community of an estimated 60,000 people.

But the team also discovered evidence of erosion in upslope soils, suggesting that farming did spread to steeper, less suitable soils over time. And if Maya agriculture did cause substantial erosion, the soil loss could eventually have undercut the Maya's ability to grow food, say the researchers.

The findings are just the latest example of how invisible artifacts in soil—something archeologists literally used to brush aside—can inform studies of past civilizations. That's because artwork and buildings can crumble over time and jungles will eventually conceal ancient farm fields, but "the soil chemistry is still there," Terry says.

He explains, for example, that most forest vegetation native to Tikal uses a photosynthetic pathway called C3, while maize uses a pathway called C4. The soil organic matter derived from these two pathways also differs, allowing researchers to make conclusions about the types of plants that were growing in the soils they test.

Thus, by analyzing soils in different areas of Tikal as well as looking at the layers that had formed in the soils, Terry and his collaborators were able to map the areas where ancient maize production occurred, including lowland "bajo" areas and possibly steeper slopes, as more food was needed.

Questions like this about past farming practices have always interested archeologists, Terry notes. But the tools of modern soil science are now enabling these scientists to ask increasingly sophisticated questions about how ancient peoples tried to sustain themselves—and whether their treatment of the land was a factor in cases where they failed.

"[These tools] open us up to thinking about the world in ways that we haven't before," Terry says. "We have changed the paradigm amongst the archaeologists."

The research appearing in SSSA-J was funded by grants from the National Science Foundation and Brigham Young University.

Read more in the latest issue of Soil Horizons, a publication of the Soil Science Society of America.

The full article is available for no charge for 30 days following the date of this summary. View the abstract athttps://www.soils.org/publications/sssaj/abstracts/0/0/sssaj2010.0224.

Upland and Lowland Soil Resources of the Ancient Maya at Tikal, Guatemala

Debate over agricultural methods and productivity during the Preclassic and Classic Maya period (1000 BCE to 900 CE) focuses on the agronomic utility of both upland and lowland soil resources of the karst topography characteristic of northern Guatemala and much of the Yucatan peninsula. In settings where direct evidence of agriculture is sparse, stable carbon (C) isotope evidence from soil organic matter (SOM) provides information on past vegetation changes related to ancient maize agriculture. Areas of ancient sustained maize cultivation can be identified in an ecosystem dominated by C3 forest vegetation because of the unique C4 photosynthetic pathway of maize. The decomposition of plant materials with divergent photosynthetic mechanisms (C3 versus C4) results in SOM with correspondingly distinct stable C isotope ratios (δ13C). Such differences are preserved and detectable within the refractory humin fraction of the SOM. This study analyzes the physical and chemical soil properties including stable C isotopes of soils collected from upland and lowland locations near Tikal, Guatemala. Toeslope soils contained strong isotopic evidence of C4 vegetation likely the result of ancient maize agriculture, while the evidence from shallow soils of the summit and backslopes was less conclusive. In both upland and lowland contexts, however, the stronger evidence of ancient vegetation shifts associated with maize agriculture was found in the deeper fine-textured soils in the footslopes and toeslopes. Examination of soils on toeslopes revealed evidence of deposition from erosional processes upslope that may have been related to the spread of agriculture to less productive soils over time.