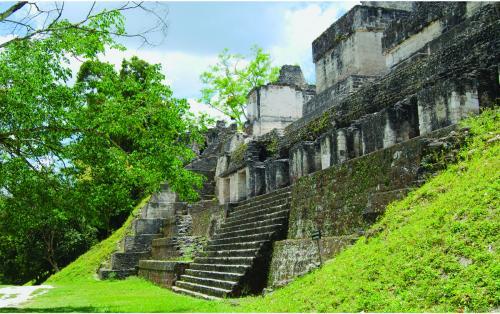 The ancient Maya city of Tikal may have used intensive agricultural practices to maintain its large population, according to a study by David Lentz of the University of Cincinnati and colleagues. While these practices enabled sustainable population growth for some time, they may eventually have exacerbated a drought that caused the abandonment of the city. The study appears in the Proceedings of the National Academy of Sciences.
The city of Tikal, located in what is now Guatemala, was once a major Maya population center and political center. During the Late Classic Period, which lasted from A.D. 600 to A.D. 850, the city displayed unprecedented achievements in architecture, art and astronomy. By the middle of the ninth century, however, its inhabitants had abandoned it, constructing its last dated monument in A.D. 869.

For decades, researches have tried to understand how Tikal was able to maintain its large population. The people would not have been able to import enough food to sustain themselves, as they had no draft animals, wheeled vehicles or navigable waterways. Lentz and his team hypothesized that the Maya at Tikal relied on intensive agriculture for sustenance.

However, the methods used to increase agricultural productivity caused Tikal to become completely dependent on consistent annual rainfall. When the central Maya lowlands began experiencing an extremely dry period in the middle to late ninth century, the people could no longer grow enough food to meet their needs. The inhabitants of Tikal could have exacerbated the drought by clearing forests and constructing extensive pavements. The landscape would have lost the resilience to adapt to the changing conditions. 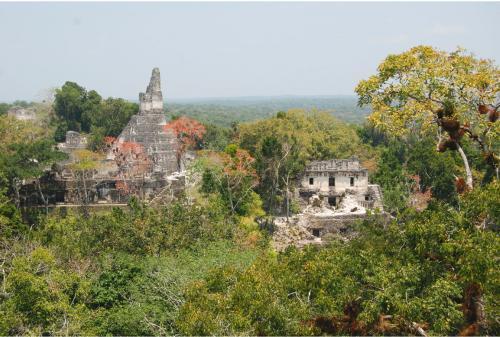 Ruins of the Maya city, Tikal. Credit: David L. Lentz
By the middle of the ninth century, little food or water would have been left. As the city's social structure collapsed, the people would have abandoned it.

Lentz and his team believe that the fall of Tikal began when the city reached a tipping point in which reduced precipitation would not allow the inhabitants to meet their increasing productivity demands. Until the end of the Late Classic Period, intensive agriculture was able to fulfill immediate demands. However, when the dry period began, Tikal was unable to adapt to changing climate patterns. The team thinks similar scenarios occurred throughout the central Maya lowlands at this time. 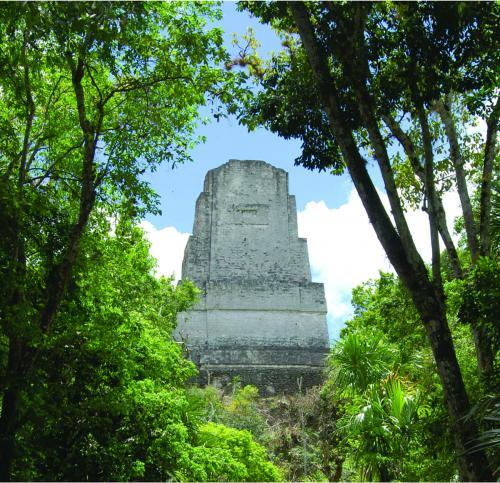 Abstract
Tikal has long been viewed as one of the leading polities of the ancient Maya realm, yet how the city was able to maintain its substantial population in the midst of a tropical forest environment has been a topic of unresolved debate among researchers for decades. We present ecological, paleoethnobotanical, hydraulic, remote sensing, edaphic, and isotopic evidence that reveals how the Late Classic Maya at Tikal practiced intensive forms of agriculture (including irrigation, terrace construction, arboriculture, household gardens, and short fallow swidden) coupled with carefully controlled agroforestry and a complex system of water retention and redistribution. Empirical evidence is presented to demonstrate that this assiduously managed anthropogenic ecosystem of the Classic period Maya was a landscape optimized in a way that provided sustenance to a relatively large population in a preindustrial, low-density urban community. This landscape productivity optimization, however, came with a heavy cost of reduced environmental resiliency and a complete reliance on consistent annual rainfall. Recent speleothem data collected from regional caves showed that persistent episodes of unusually low rainfall were prevalent in the mid-9th century A.D., a time period that coincides strikingly with the abandonment of Tikal and the erection of its last dated monument in A.D. 869. The intensified resource management strategy used at Tikal—already operating at the landscape's carrying capacity—ceased to provide adequate food, fuel, and drinking water for the Late Classic populace in the face of extended periods of drought. As a result, social disorder and abandonment ensued.