Tianluoshan (Chine): New discovery at the site in 2012

Within the 1200 square meter area, 500 square meters area in middle and east district of the excavation area, partial pile-dwelling characterized as rows of stakes being basis, which was dated to the early Hemudu Culture, was discovered. The rows of stakes were basically cross laid out in northeast-southwest and northwest-southeast direction. The wooden pile-dwellings were rows house roughly in northeast-southwest direction. Each stake is about 10cm in diameter and the distance between stakes is about 10-20cm.

These pile-dwelling were based on row of stakes laid out closely and were similar with the building ruins from the early Fujiashan site in the Jiangbei district, Ningbo, and the Hemudu site. So they should belong to the first phase of the pile-dwelling, characterized as multi-points intensively bearing weight. This type of architecture was suitable to the subsistence activities, such as digging pit and processing wood during the early stage of the early phase of the Hemudu culture, which is about 7000BP. 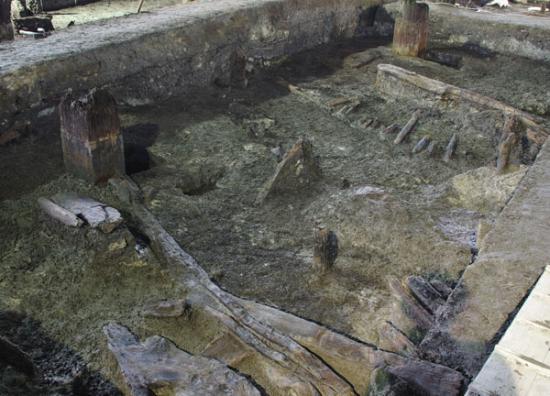 In the second phase, a net consisting of thick and large stakes in pits was used as the base of buildings. These stakes were mostly squares or flat squares with right angle. They were processed very neatly but with many traces left by axes or adzes processing on the surface. Many squares are huge, some of which reach 50cm in length of a size, but most of which are 30-40cm. The longest square are near 3 meters at present. The excavation of such a huge wood square is very rare seen in prehistory archaeology, representing the advanced wooden architecture process and construction level of that time, and reflecting the wisdom and hard work of the ancestors during the process of utilizing and reforming nature. The layout of these squares showed some regularity and was of square or rectangular pattern in different districts, therefore the pattern of the architecture in this phase was clearer. In the north excavation area, there was a long row house which was 20 meters long in south-north direction and 8-10 meters wide in east-west direction. Every single stake of this house was small. At its south-east direction, there were lots of single huge squares stakes, roughly forming a huge-scaled building complex in east-west direction with near 300 square meter area. In terms of its position and scale, it was possibly used to be the central big house in its village and was a ritual building. While on its northwest, a wooden house might have been a daily living building of its village because it was smaller in scale and there were quantity of daily waste on its north, such as the bone fragments of cattle, deer, fish and so on. Moreover, the layout of these two buildings showed that functional districts with daily living building separate from ritual building had emerged in a village. In addition, the discovery of wooden village walls, river, single-log bridge and the ancient rice field, further showed the basic feature of the settlement layout of the Tianluoshan site during this period, and supplied significant materials for carrying out the study on the settlement pattern during the Hemudu culture. The chronology of the ruins in this phase could be dated to the late stage of the early Hemudu culture, which is about 6500BP.

During the third phase, the architecture ruins were based on the wood stakes net in form of digging pit, putting the boards in the base and erecting the stakes, amongst which were put on one to six boards in pits. In a few pits, short stakes were remained. The stake pits were mostly square with round corners or rectangular. They were 60-100cm in length and width and 50-80cm in depth. The patterns the pits formed were roughly rectangular or round. The characteristics of these stake pits obviously developed based on the pattern in technology and experience of the second phase, and also the origin of the Chinese traditional civil construction technology. The third phase could be dated to about 6000BP in the early stage of the late Hemudu culture.

During the fourth phase, the architectures was built on the basis which were constructed following the sequence of digging shallow pits, putting rocks and timbers, erecting the stakes, then filling burned earth around the stakes. The pits were in varied sizes and depth. The architecture pattern was rectangular in unit. The chronology of the ruins in this phase is about 5500BP, which was the late stage of the late Hemudu culture.

The different architecture patterns in the above different phases clearly indicated that the construction technology of the pile-dwelling during the Hemudu culture had four development stages in proper sequence. This discovery made a true breakthrough in the process of exploring the development of the pile-dwelling style during the Hemudu culture. This will have a significant influence in the Chinese architecture history.

Besides the village building ruins and thousands of common objects, there were many special objects unearthed, such as wood tablet carved with elephant patterns, canoe ladder, wood ritual object carved two birds, millstone, wooden dou plate-shaped object and so on. They supplied rare materials for witnessing the superb technology and art level at the varied aspects of the Hemudu culture, and studying the primary religion making nature worship as a core.

In addition, a large quantity of organic remains were systematically obtained, including fish bone dump or pits, cattle skulls, deer antlers, tortoise shells, rice crust dump, saw dust dump, white earth pits, oaks and water chestnut storage and process pits, which were related to the village construction layout and could reflect the ancestors’ subsistence pattern (such as food structure) and process activities. These laid solid foundation for the continuous utilization of the multi-discipline knowledge and technology in the excavation, and re-construction of the prehistory culture in the southeast region and re-appearing the life situation of ancestors. 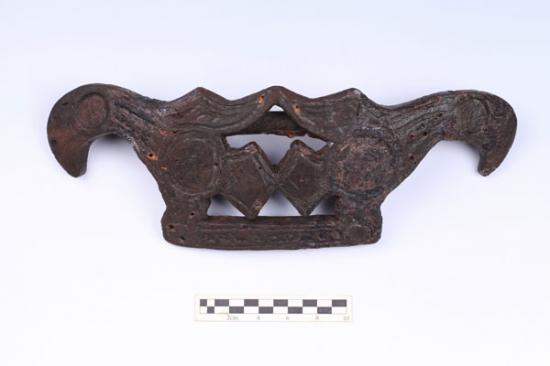 Surrounding the residential area of the site, unearthed many cultivated camellia plant intrusions. The related test including timber thin-section and the contained theanine ingredients test, showed they were the earliest cultivated tea tree remains in China. This discovery probably prolonged Chinese tea cultural history to 6000 years ago.

In the meanwhile, there were rice field and roads in east-west direction discovered along the rice field and linking to the village. The roads were paved with quantities of small timber, tree branches and fine bamboo poles. The more important is an about 70cm thick pure sludge layer discovered between rice fields of the early stage and that of the late stage. It confirmed that there were ever a period when sea level rose and the rice cultivation environment deteriorated. In addition, a rice field corner and a likely terrace dating to the early phase was found in the 2.7m deep deposits. These new discovery supplied important views for further studying the relation between the rice cultivation technology and the natural environment development during the Hemudu culture.

In brief, the excavation at the Tianluoshan site in 2012 supplied multi-aspect special values for scientifically and systematically studying the Hemudu culture and further confirming the status of the Hemudu culture in the origin of rice cultivation and development, the origin of the pile-dwelling, Chinese prehistory settlement pattern, interaction between human being and environment, the origin of the Austronesian family culture and other important academic projects both here and abroad:

2. clearly knew the four development stages of the construction technology of the pile-dwelling architecture during the Hemudu Culture: first discovering the functional districts separated the daily living buildings from ritual buildings in one village; basically confirming the unit patterns and scale of the pile-dwelling architecture; unearthing quantities of square wood parts reflecting the superb process and construction technology, which was rare in Chinese prehistory.

3. further revealing the early rice cultivation technology and the extensive cultivation pattern during the Hemudu culture that the rice fields were irrigated by using the pieces of everglades, wet lands, natural rain or small pond, brook which could be found in local area. Moreover, it was found from the typical stratigraphic sections that the rise and fall of the rice cultivation during the Hemudu culture was obviously limited by the natural elements in coastal area, such as the sea level change during the late Holocene.

4. unearthing a few magic artifacts with special functions and superb technology, which enriched the connotation of the Hemudu culture.

5. systematically obtaining the organic remains reflecting the ancestors’ subsistence pattern (food structure) and process activities, especially micro-faunal and floral remains which were usually neglected in the archaeological excavation. This type of micro-archaeology made it possible that are close to history or re-appear of a true and complete history. Based on this, the archaeology at the Tianluoshan site opened a window for re-construction of the Neolithic history in Southern China. The unearthed camellia plant remains possibly prolonged the Chinese tea culture history to 6000 years ago.