When people abandoned a hunter-gatherer lifestyle and became agriculturalists, initially some 10,000 years ago, they gave up a lot of things.

This significant shift in the way they obtained their food was probably not something they elected to do. Instead, population pressure and diminishing resources forced people into developing new intensified forms of subsistence. This meant people became more sedentary.

Not only did these new arrangements result in the emergence of new social structures and new technological innovations, but it also had some very negative outcomes.

As people intensified their subsistence strategies and became sedentary there was an increase in population size.

New diseases evolved through the closer association with animals and coupled with large population sizes this enabled the emergence of epidemic scale disease patterns. This list probably included diseases such as measles, influenza, whooping cough, smallpox and tuberculosis.

A lot happened when humanity turned to agriculture.

The genome tells the story

We were involved in a study, published recently, which looked at specific parts of modern genomes of people from around the globe. It also appears that there were significant changes in population structure as well, and not just population size.

The study focused on the Y chromosome that is only inherited through the paternal line from fathers to sons. This tells us about origins and migrations of males in the population, but it can also reveal patterns in population changes.

These results were compared to those from the mitochondrial DNA, that is the DNA inherited through the maternal line in humans. 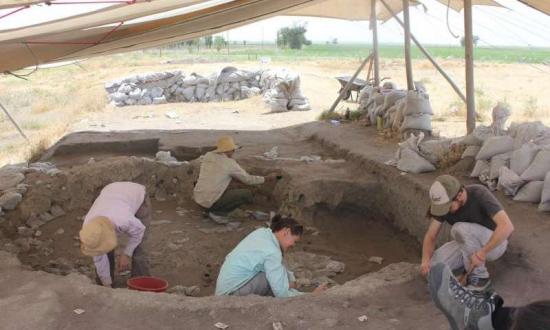 Excavation of 10,500 year old mud brick house, providing some of the earliest evidence for village life associated with agriculture, Boncuklu, Turkey. Credit: Dr Andrew Fairburn, Author provided
This appears to correlate with the timing of this major shift in subsistence, referred to by archaeologists as the Neolithic.

In fact, Y chromosome genetic data suggests this reduction at around 8,000 to 4,000 years ago. Essentially there was a genetic bottleneck in male genetic diversity at that time which cannot be easily explained through natural selection.

Could the development of agriculture and a shift in social patterns explain this change?

If male reproductive success was being controlled by a smaller number of males of high social order, for example a smaller ruling elite, then we would see a situation where male population (genetic) diversity was reduced.

An example of such an event from much later times is Genghis Khan. He was reputed to have sired hundreds of children, resulting in millions of Asian men today who bear a very similar Y chromosome lineage. Identifying such social changes within the archaeological record, however, is easier said than done.

The Neolithic introduced a new system of economic production and increased social stratification. The rise of a social elite and followers and the development of hierarchies in a society, independently emerged in several global regions, and later spread across much of the world.

The studied 110 populations were grouped according to seven global regions and the decrease of male genetic diversity emerges in all of them (with the exception of Siberia).

It is important to note that the Neolithic took many different forms as it spread across the globe. It was not a prehistoric corporate global takeover, but it did set humanity on a course that it could not turn back from. 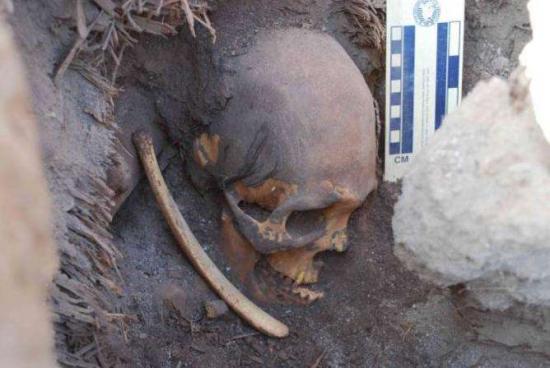 An early burial from the archaeological site of Caleta Vitor, Chile. Agriculture mixed with a marine economy provided the basis for village life at this 7,000 year old site. Credit: Chris Carter, ANU
Unravelling the history

Archaeology can be very effective for reconstructing past social change in societies, ranging from the study of artefacts which may reveal new innovations to the changing frequencies in trauma and disease patterns in skeletons.

It can reveal the development of new forms of structures, such as fortifications, irrigation systems and enlarged settlements. It can also show the impact of people on their environments such as domestication of plants and animals, and the deforestation and increased salinisation of landscapes.

But competition through male-driven conquest represents a signature that archaeologists would find exceedingly difficult to identify from the material archaeological record alone.

Studies looking at ancient genomes are starting to detect patterns in population change that would otherwise remain hidden if we relied solely on standard archaeological investigations.

Research into genetic changes in populations therefore can serve as a catalyst for archaeologists to revisit the material record with such hypotheses in mind.

The opportunity now exists to test the global hypothesis proposed by this study from modern and ancient genomes. By working much more closely with archaeologists and palaeo-environmental scientists we can reconstruct the social and environmental contexts that may have driven changes in ancient populations.

The techniques now exist to build far more sophisticated models for understanding the global past of humanity through targeting specific geographic regions. It will be of great interest to develop a clearer understanding of past societies that did not endure the many hardships of agriculture. Aboriginal Australia is one such place.

Modern and ancient genomics is playing the key role in generating this revision of our shared past. Approaches that identify culturally driven sex-specific changes in our ancient human history provide yet another insight into the impact of the world changing Neolithic revolution.