There really are 50 Eskimo words for ‘snow’ 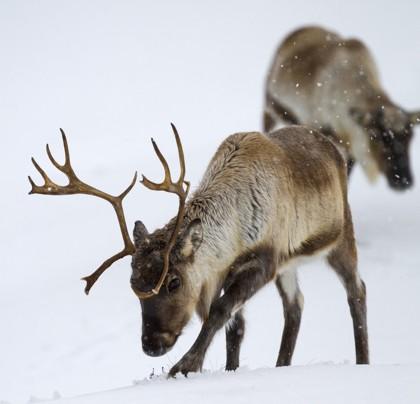 Anthropologist Franz Boas didn’t mean to spark a century-long argument. Traveling through the icy wastes of Baffin Island in northern Canada during the 1880s, Boas simply wanted to study the life of the local Inuit people, joining their sleigh rides, trading caribou skins and learning their folklore. As he wrote proudly to his fiancee, “I am now truly like an Eskimo. . . . I scarcely eat any European foodstuffs any longer but am living entirely on seal meat.” He was particularly intrigued by their language, noting the elaborate terms used to describe the frozen landscape: “aqilokoq” for “softly falling snow” and “piegnartoq” for “the snow [that is] good for driving sled,” to name just two.

Mentioning his observations in the introduction to his 1911 book “Handbook of American Indian Languages,” he ignited the claim that Eskimos have dozens, or even hundreds, of words for snow. Although the idea continues to capture public imagination, most linguists considered it an urban legend, born of sloppy scholarship and journalistic exaggeration. Some have even gone as far as to name it the Great Eskimo Vocabulary Hoax. The latest evidence, however, suggests that Boas was right all along.

This debate has rumbled on partly because of a grammatical peculiarity of the Eskimo family of languages. Boas studied Inuit, one of the two main branches; the other is Yupik. Each has spawned many dialects, but uniting the family is a feature known as polysynthesis, which allows speakers to encode a huge amount of information in one word by plugging various suffixes onto a base word.

For example, a single term might encompass a whole sentence in English: In Siberian Yupik, the base “angyagh” (boat) becomes “angyaghllangyugtuqlu” to mean “what’s more, he wants a bigger boat.” This makes compiling dictionaries particularly difficult: Do two terms that use the same base but a different ending really represent two common idioms within a language, or is the difference simply a speaker’s descriptive flourish? Both are possible, and vocabulary lists could quickly snowball if an outsider were to confuse the two — a criticism often leveled at Boas and his disciples.

Yet Igor Krupnik, an anthropologist at the Smithsonian Arctic Studies Center in Washington, believes that Boas was careful to include only words representing meaningful distinctions. Taking the same care with their own work, Krupnik and others charted the vocabulary of about 10 Inuit and Yupik dialects and concluded that they indeed have many more words for snow than English does.

Central Siberian Yupik has 40 such terms, while the Inuit dialect spoken in Canada’s Nunavik region has at least 53, including “matsaaruti,” for wet snow that can be used to ice a sleigh’s runners, and “pukak,” for the crystalline powder snow that looks like salt.

For many of these dialects, the vocabulary associated with sea ice is even richer. In the Inupiaq dialect of Wales, Alaska, Krupnik documented about 70 terms for ice that mark such distinctions as: “utuqaq,” ice that lasts year after year; “siguliaksraq,” the patchwork layer of crystals that forms as the sea begins to freeze; and “auniq,” ice that is filled with holes, like Swiss cheese.

It is not just the Eskimo languages that have colorful terms to describe their frosty surroundings: The Sami people, who live in the northern tips of Scandinavia and Russia, use at least 180 words related to snow and ice, according to Ole Henrik Magga, a linguist in Norway. (Unlike Inuit dialects, Sami ones are not polysynthetic, making it easier to distinguish words.)

The Sami also have as many as 1,000 words for reindeer. These refer to such things as the reindeer’s fitness (“leami” means a short, fat female reindeer), personality (“njirru” is an unmanageable female) and the shape of its antlers (“snarri” is a reindeer whose antlers are short and branched). There is even a Sami word to describe a bull with a single, very large testicle: “busat.”

This kind of linguistic exuberance should come as no surprise, experts say, since languages evolve to suit the ideas and needsthat are most crucial to the lives of their speakers. “These people need to know whether ice is fit to walk on or whether you will sink through it,” says linguist Willem de Reuse at the University of North Texas. “It’s a matter of life or death.”

“All languages find a way to say what they need to say,” says Matthew Sturm, a geophysicist with the Army Corps of Engineers in Alaska. For Sturm, it is the expertise these words contain that is of most interest, rather than the squabble about the number of terms. “These are real words that mean real things,” he says.

Sturm is particularly admiring of Inuit knowledge of the processes that lead to different snow and ice formations, mentioning one elder who “knew as much about snow as I knew after 30 years as a scientist.” In Sturm’s opinion, documenting this knowledge is far more important than finding out exactly how many words for snow there are.

Others also recognize the urgency of this work. As many indigenous people turn away from their traditional lifestyle, the expertise encapsulated in their vocabulary is fading. That is why researchers such as Krupnik are trying to compile and present their dictionaries to the local communities, as lasting records of their heritage.

“Boas only recorded a small fragment of the words available,” Krupnik says. In the intervening century, much has been lost. “At his time there would have been many more terms than there are today.”

This article was produced by New Scientist.