Ancient Egypt’s maritime activities also served political and symbolic purposes, Tallet argues. It was important for the Egyptian kings to demonstrate their presence and control over the whole national territory, especially its more remote parts, in order to assert the essential unity of Egypt. “Sinai had great symbolic importance for them as it was one of the farthest points they could reach,” Tallet says. “In the Sinai the inscriptions are explaining the mightiness of the king, the wealth of the king, how the king is governing its country. On the outer limits of the Egyptian universe you have a need to show the power of the king.”

In fact, their control of the periphery was rather fragile. Distant and inhospitable Sinai, with its barren landscape and hostile Bedouin inhabitants, represented a challenge for the pharaohs; one inscription records an Egyptian expedition massacred by Bedouin warriors, Tallet says. Nor were the Egyptians always able to hold on to their camps along the Red Sea. “We have evidence from Ayn Soukhna that the site was destroyed several times. There was a big fire in one of the galleries....It was probably difficult for them to control the area.”

Apparently all parts of Egypt were involved in the great building project at Giza. Granite came from Aswan far to the south, food from the delta in the north near the Mediterranean, and limestone from Tura, about 12 miles south of Cairo on the Nile. The burst of maritime activity was also driven by the monumental undertaking. “It is certain that the shipbuilding was made necessary by the gigantism of the royal building projects,” Tallet writes in a recent essay, “and that the great majority of the boats were intended for the navigation of the Nile and the transport of materials along the river, but the development of Wadi al-Jarf exactly in the same period allows us to see without doubt the logical extension, this time toward the Red Sea, of this project of the Egyptian state.”

Working on the royal boats, it seems, was a source of prestige. According to the papyri found at Wadi al-Jarf, the laborers ate well, and were provisioned with meat, poultry, fish and beer. And among the inscriptions that Tallet and his team have found at the Wadi al-Jarf gallery complex is one, on a large jar fashioned there, hinting at ties to the pharaoh; it mentions “Those Who Are Known of Two Falcons of Gold,” a reference to Khufu. “You have all sorts of private inscriptions, of officials who were involved in these mining expeditions to the Sinai,” Tallet says. “I think it was a way to associate themselves to something that was very important to the king and this was a reason to be preserved for eternity for the individuals.” Clearly these workers were valued servants of the state.

The discovery of the papyri at such a distant location is significant, Tallet says: “It is not very logical that [the writings] should have ended up at Wadi al-Jarf. Of course [the managers] would have always traveled with their archives because they were expected always to account for their time. I think the reason we found [the papyri] there is that this was the last mission of the team, I imagine because of the death of the king. I think they just stopped everything and closed up the galleries and then as they were leaving buried the archives in the area between the two large stones used to seal the complex. The date on the papyri seems to be the last date we have for the reign of Khufu, the 27th year of his reign.” 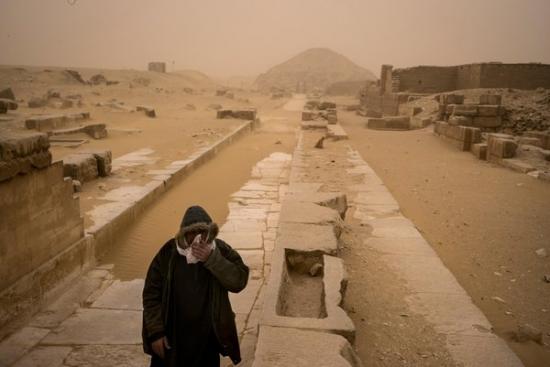 The work that Tallet and his colleagues have done along the Red Sea connects with Lehner’s work at Giza. In the late 1980s, Lehner began a full-scale excavation of what has turned out to be a residential area a few hundred yards from the pyramids and the Sphinx. For centuries, travelers had contemplated these amazing monuments in splendid isolation—man-made mountains and one of the world’s great sculptures sitting seemingly alone in the desert. The paucity of evidence of the substantial number of people needed to undertake this massive project gave rise to many bizarre alternative theories about the pyramids (they were built by space aliens, by the people from Atlantis and so forth). But in 1999, Lehner began uncovering apartment blocks that might have housed as many as 20,000 people. 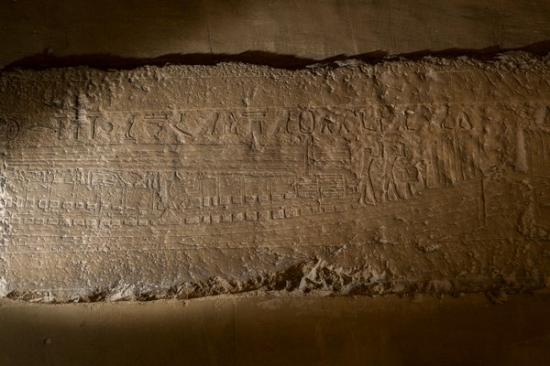 And many of the Giza residents, like the boatmen at the Red Sea, appear to have been well-fed. Judging by remains at the site, they were eating a great deal of beef, some of it choice cuts. Beef cattle were mostly raised in rural estates and then perhaps taken by boat to the royal settlements at Memphis and Giza, where they were slaughtered. Pigs, by contrast, tended to be eaten by the people who produced the food. Archaeologists study the “cattle to pig” ratio as an indication of the extent to which workers were supplied by the

central authority or by their own devices—and the higher the ratio, the more elite the occupants. At Lehner’s “Lost City of the Pyramids” (as he sometimes calls it), “the ratio of cattle to pig for the entire site stands at 6:1, and for certain areas 16:1,” he writes of those well-stocked areas. Other, rather exotic items such as leopard’s teeth (perhaps from a priest’s robe), hippopotamus bones (carved by craftsmen) and olive branches (evidence of trade with the Levant) have also turned up in some of the same places, suggesting that the people who populated Lehner’s working village were prized specialists.

Sailors may have figured among the visitors to the pyramid town, according to Merer’s papyrus journal. It mentions carrying stone both up to the lake or basin of Khufu and to the “horizon of Khufu,” generally understood to refer to the Great Pyramid. How did Merer get his boat close enough to the pyramids to unload his cargo of stone? Currently, the Nile is several miles from Giza. But the papyri offer important support for a hypothesis that Lehner had been developing for several years—that the ancient Egyptians, masters of canal building, irrigation and otherwise redirecting the Nile to suit their needs, built a major harbor or port near the pyramid complex at Giza. Accordingly, Merer transported the limestone from Tura all the way to Giza by boat. “I think the Egyptians intervened in the flood plain as dramatically as they did on the Giza Plateau,” Lehner says, adding: “The Wadi al-Jarf papyri are a major piece in the overall puzzle of the Great Pyramid.”

Tallet, characteristically, is more cautious. “I really don’t want to be involved in any polemics on the building of the pyramids at Giza—it’s not my job,” he says. “Of course it’s interesting to have this kind of information, it will deserve a lot of study.”

Tallet believes that the Lake of Khufu, to which Merer refers, was more likely located at Abusir, another important royal site about ten miles south of Giza. “If it is too close to Giza,” Tallet says, “one does not understand why it takes Merer a full day to sail from this site to the pyramid.” But Tallet has been persuaded by Lehner’s evidence of a major port at Giza. It makes perfect sense, he says, that the Egyptians would have found a way to transport construction materials and food by boat rather than dragging them across the desert. “I am not sure it would have been possible at all times of the year,” he said. “They had to wait for the flooding, and could have existed for perhaps six months a year.” By his estimate the ports along the Red Sea were only working for a few months a year—as it happens, roughly when Nile floods would have filled the harbor at Giza. “It all fits very nicely.”