The size of domestic animals has increased over time

UPV/EHU-University of the Basque Country

The paper on zooarchaeology ‘Livestock management in Spain from Roman to post-medieval times: a biometrical analysis of cattle, sheep/goat and pig' by the researcher of the Department of Geography, Prehistory and Archaeology of the UPV/EHU-University of the Basque Country Idoia Grau-Sologestoa, appeared recently in the ‘Journal of Archaeological Science'. The study shows successive changes in the size of domestic animals over time relating to changes in the landscape and production systems. 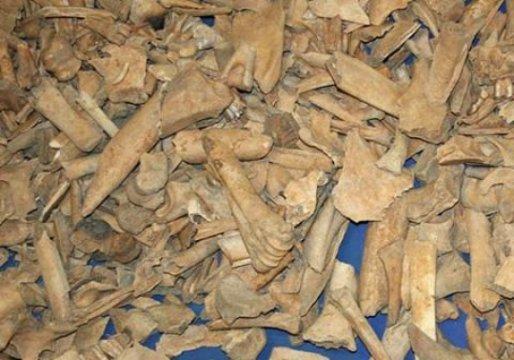 Zooarchaeology is a discipline that studies the relationship between human beings and animals throughout history. To do this, zooarchaelogists study the remains of animals found in archaeological sites. This discipline studies questions relating to livestock husbandry, food or the ritual use of animals, among other things.

The paper ‘Livestock management in Spain from Roman to post-medieval times: a biometrical analysis of cattle, sheep/goat and pig' is the outcome of the PhD research work conducted by Idoia Grau-Sologestoa and completed in 2014 at the UPV/EHU, and has been published recently in the prestigious ‘Journal of Archaeological Science' which specialises in archaeology.

It is an analysis of metric data taken from the remains of domestic animals (cows, sheep and pigs) salvaged on archaeological sites across the Iberian Peninsula. The measurements analysed (numbering over 2,500) come from 41 archaeological sites dating between the Roman era and today, since the 1st century BCE until the 21st century. Many of these sites are located in the Basque Country, but also in Aragón, Castilla y León, Catalonia, Madrid, Murcia, Navarre, Valencia and the south of Portugal.

The study shows successive changes in the size of domestic animals over time relating to changes in the landscape and production systems. "The increase in animal size is normally linked to improvements of an environmental type (for example to new ways of feeding) or of a genetic type (for example, by importing larger animals). Larger domestic animal size entails a number of economic advantages with an increase in meat production or traction strength. What is more, improved domestic animals tend to grow faster which helps to increase their productivity," explained Idoia Grau.

Changes during the Roman Empire

In Roman times there was a special interest in improving cattle possibly in connection with the deforestation and agricultural intensification practices which the Roman Empire brought with it. During the first centuries after the fall of the Empire, domestic animal size did not undergo significant changes. "It is possible that zootechnical knowledge of the Roman era may not have been lost suddenly and that the improved Roman livestock was maintained over various generations," pointed out the researcher.

Nevertheless, between the 8th and the 9th centuries CE domestic animal size reached a minimum in the whole period covered by this study. This size reduction could be linked to the spread of semi-free foraging practices of cattle during the Early Middle Ages, a trend seen elsewhere in Europe and which has been confirmed by the analysis of stable isotopes; this work was carried out by the research group which Idoia Grau belongs to and was published a few months ago in  ‘Quaternary International'      (http://www.sciencedirect.com/science/article/pii/S1040618214003516).

After the High Middle Ages, but more clearly since the Late Middle Ages, the size of domestic animals has been increasing progressively, especially that of sheep. It is probable that "this increase is linked to the importance of sheep husbandry in this period not only for meat production but also to take advantage of the wool and milk of these animals," explained Grau.

But it is in the modern era that animal size reached its maximum. In any case this could be the least-known period from the archaeological point of view, as hardly any analysis has been conducted on groups of fauna remains dated after the 16th century. The research project that Idoia Grau-Sologestoa is currently working on thanks to a post-doctoral grant from the Government of the Basque Autonomous Community (region) at the UPV/EHU and at the University of Sheffield in the United Kingdom is in fact seeking to conduct research into the changes that took place in livestock management during the transition between the Middle Ages and the Modern Era.

Grau-Sologestoa, I. ‘Livestock management in Spain from Roman to post-medieval times: a biometrical analysis of cattle, sheep/goat and pig'. Journal of Archaeological Science. Volume 54, february 2015, pages 123–134.