The riddle of the Syriac double dot: The world's earliest question mark

The riddle of the Syriac double dot: The world's earliest question mark 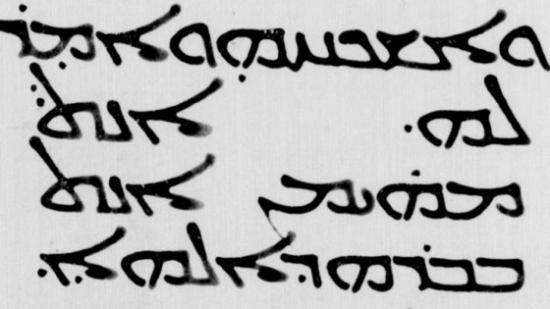 Extract from the New Testament in Syriac from the sixth century. Credit: British Library Board

Cambridge University manuscript specialist, Dr. Chip Coakley has identified what may be the world’s earliest example of a question mark. The symbol in question is two dots, one above the other, similar in appearance to a colon, rather than the familiar squiggle of the modern question mark. The double dot symbol appears in Syriac manuscripts of the Bible dating back to the fifth century.

Syriac is a language of the Middle East with a large Christian literature and its golden age was in the centuries before the rise of Islam. Syriac studies are blessed by the survival of a collection of very early manuscripts, the remnants of one derelict monastery library. In the 1840s, the British Museum stumped up almost £5000 to buy them, and scholars have lived off this purchase ever since.

Manuscripts of the Bible are not even the majority of the collection now in the British Library, but they have their special points of interest. One of these is the way that the graceful and flowing Syriac script is peppered with dots. Some of these dots are well understood, but some are not – some, indeed, probably not even by the scribes, who did not copy them consistently. All this made for a confusing picture, and it needed a patient scholar to start to make sense of it.

One step at least has been taken by Dr. Coakley, a manuscript specialist at Cambridge University Library who teaches Syriac to students in the Divinity and Middle Eastern Studies faculties. “When you are sitting round a table reading a Syriac text with students, they ask all kinds of questions – like what the heck does this or that dot mean – and you want to be able to answer them,” said Dr. Coakley. “In addition, as I’ve got older I’ve got fascinated by smaller and smaller things like punctuation marks.”

The double dot mark, known to later grammarians as zawga elaya, is written above a word near the start of a sentence to tell the reader that it is a question. It doesn’t appear on all questions: ones with a wh- word don’t need it, just as in English ‘Who is it’ can only be a question (although we use a question mark anyway).  But a question like ‘You’re going away?’ needs the question mark to be understood; and in Syriac, zawga elaya marks just these otherwise ambiguous expressions.

“Reading aloud, the same function is served by a rising tone of voice – or at least it is in English – and it is interesting to ponder whether zawga elaya really marks the grammar of the question, or whether it is a direction to someone reading the Bible aloud to modulate their voice,” said Dr. Coakley.

Question marks in Greek and Latin script emerged later than in Syriac, with the earliest examples dating from the eighth century. It is likely that these symbols developed independently from each other and from Syriac. Hebrew and Arabic, close neighbours of Syriac, have nothing comparable. Armenian, another neighbour, has a similar mark, but it seems to be later.

Last month Dr. Coakley presented his theory that the question mark is a Syriac invention “rather nervously” at a conference in the United States.  But so far none of his fellow scholars has come up with an earlier question mark in any other ancient language.

Dr. Coakley is quietly thrilled by his finding. “I’d describe it as a significant footnote in the history of writing,” he said. “And it’s satisfying to have made sense of some of those weird dots.”