The relationship between diet and easy childbirth 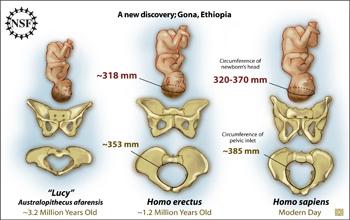 It has been said that women may not frequently bear arms, but they do bear armies. During World War One, The Woman's Journal, founded in 1870 in Boston, Massachusetts by Lucy Stone tackled this question head-on. On the magazine's first page, appeared a cartoon which showed a woman holding a baby and saying 'Votes for Women'.

Nearby, a heavily armed soldier declared that 'Women can't bear arms', to which a suffragist replied, 'No! Women bear armies'. In other words, women supported the war effort through motherhood, and were thus worthy of the vote, according to the 2003 BBC article, "Women and the Military during World War One," by Professor Joanna Bourke. Is the 'ideal' woman the healthiest and fittest woman? How did a woman experience her childbearing years regarding her health and survival before agriculture--based on her diet and fitness?

Before agriculture, why was childbirth easier, quicker, and less painful?

Childbirth was much easier, quicker, and less painful before the agricultural revolution, scientists assume from the larger size of women's child-bearing 'equipment' seen in fossil skeletons of what people looked like before 10,000 years ago. After all, humanity did survive the Ice Age. Did the diet of hunter-gatherers have anything to do with the greater pelvic depth size of pre-agricultural women and some modern women on what scientists call the original pre-agricultural foods Inuit diet of Arctic peoples today?

What has food got to do with it? Did the phytates from a diet too high in grains prevent minerals from being absorbed into the bloodstreams of more modern populations? Was that what caused the drastic reduction of pelvic size and more painful childbirths?

Pelvic inlet depth and average stature of any group of people in modern, historical, and prehistorical times are markers of interest, if you overlook the life expectancy data due to war, accidents or epidemics unrelated to daily diet, according to the August 2008 article, "Life Expectancy and Growth of Paleolithic vs. Neolithic Humans."

Why has the human pelvis gone from very large (easier childbirth) to tiny (painful childbirth, longer labors) and now is growing larger again, for some, but not for all? But in modern times, females still haven't reached the large pelvis size that it was 30,000 to 9,000 years ago.

One can see from the data that looks at the changing size of the pelvic depth, the life span, and the height of men and women at the nutrition and physical degeneration site, that things are rarely as clear-cut as dietary purists would like them to be. For any period in time, there is good and there is bad.

What you need to look at, for example, is pelvic inlet depth. These are both markers of nutritional status during development. Basically, thousands of years ago, childbirth had been easier, quicker, and a lot less painful. Pelvic inlet depth is a measure of the size of the pelvic canal through which a baby would pass during birth. The difference shows up in both males and females.

Regarding birth, stature and pelvic inlet depth declined tremendously with adoption of agriculture. There's no way in modern times that most female pelvic depth size levels match the large room that paleolithic women had.

Exceptions might be found, not where they would be expected, not in Africa, for example, where the diet is mostly cereal-grains based today, but with Arctic peoples that are following original diets rather than standard Western diets.

Nutritionists have to ask the question: Do grain-based diets interfere with normal skeletal development? There are plenty of studies. Nutritional anthropologists and archaeologists have long written about how the adoption of grains coincided with smaller pelvis sizes in men and women, shortening of height stature, thinner bones, and crooked, cavity-ridden teeth.

Archaeologists that study human fossils point out that skeletal changes are sometimes used as evidence that grains were adopted in a particular region historically. What nutritional anthropologists do also is to study populations as they transition from traditional diets to lots of processed foods rich in white flour, sugar, and corn products along with other types of processed foods, such as certain processed cheeses or nondairy 'milk' substitutes further processed with aluminum.

What's striking is the change in pelvic inlet depth. Why is modern childbirth so painful and long, especially with the first pregnancy? Could diet over thousands of years have set women up so they can no longer deliver their own babies in a short space of time without the type of pain most have reported in journals before the invention of anesthesia, for example, from medieval times until the turn of the present century?

In Western society, birth takes much longer and has evolved into a dangerous situation. How many women have the type of pelvic depth to go through childbirth without the aid of modern medicine and without the type of pain that seemed to develop in more modern times--say the last 1,000 years?

Without the aid of modern medicine, the rising number of C-sections required to save the life of the baby and the mother seems to be increasing. How many women can honestly say they and/or their infant(s) would have survived birth without medical intervention? Could diet over the last ten thousand years have played a role in the evolving pelvis depth size--getting smaller over time?

Modern times shows women evolving a much narrower pelvic inlet than what existed in ancient and also prehistoric times among human beings. For example, before agriculture, a hunter-gatherer woman's pelvis inlet was much larger than the pelvis inlet size of a modern woman. Archaeologists can put fossil human skeletons side by side and compare how female pelvis size has been changing throughout history and prehistory.

If you speak with doctors visiting traditional societies not on a diet of cereal grains, there's a relative ease of childbirth among many of these hunter-gather societies, for example among Inuits and other Arctic peoples, and various other North Asian populations that live on a diet similar to Inuits. You can check out these observations from the book, Nutrition and Physical Degeneration.

If you look through this book, check out the numbers for average stature and pelvic inlet depth. These are both markers of nutritional status during development.

What made the pelvic inlet depth decline? Was it the adoption of agriculture? Currently, is pelvic depth still declining? It's not how wide the hips are, because hunter-gatherer human women in prehistoric times had narrow hips. Before humans, female Home Erectus had wide, swaying hips. But pre-agriculture human women had narrow hips that were deep from front to back. It's the pelvic inlet depth, the measurement from front to back, not from side to side. Ask your OBGYN.

Why did a Neolithic, agricultural age diet emphasizing a high level of cooked grains coincide with a shortening of stature, thinner bones and crooked, cavity-ridden teeth?

Archaeologists look at fossil skeletons decline in stature to tell whether the people were eating grains at that period in history. Eating grains as white flour mixed with sweets quickly developed in ancient times. People used flour mixed with honey and fruit. They fermented the fruit to make the bread rise.

The ultimate result, say some archaeologists is that in modern times, males and females both have a narrower pelvic inlet than our ancestors. For further information, read the chapter in the book,Nutrition and Physical Degeneration, pertaining to the ease of birth of Arctic peoples before they ate foods of modern civilization compared to the problems their grand daughters are having now with birth and protracted, painful labors that was not reported in their societies before modern foods were introduced.

The book notes the following information recorded by the doctor who delivered babies in the Arctic, "One Eskimo woman who had married twice, her last husband being a white man, reported to Dr. Romig and myself that she had given birth to twenty-six children and that several of them had been born during the night and that she had not bothered to waken her husband, but had introduced him to the new baby in the morning."

The author of the book, Nutrition and Physical Degeneration, also refers to "Dr. Romig, the superintendent of the government hospital for Eskimos and Indians at Anchorage, Alaska." According to the book, Dr. Romig "stated that in his thirty-six years among the Eskimos, he had never been able to arrive in time to see a normal birth by a primitive Eskimo woman."

Basically, nutritionists want to ask how nutrition contributes to physical degeneration in several generations. What foods in particular are involved? Is it processed, Western foods? But aren't those foods supposed to get rid of the bacteria? More information has to be researched. But what is clear is that childbirth has become more difficult and more painful due to the declining pelvis depth size from previous generations to the present ones.

Only since the 1980s, according to the table comparing life span, pelvic size, and height from 30,000 years ago to the present that you can check out at the article, Paleopathology at the Origins of Agriculture, has the pelvic depth of men and women increased somewhat, but is still behind the larger size it had been in hunter-gatherer times 30,000 years ago until the dawn of agriculture 9,000 years ago.

The question is why does pelvis depth size get larger in hunter-gatherer times, and smaller at the dawn of agriculture, and larger again after 1980? Why did it shrink so small between 1800 and 1920? How is nutrition related to physical degeneration and more important, how can we make nutrition to be related to physical regeneration? It's fascinating research to look at how nutrition is linked to physical changes over time, especially at it pertains to childbirth.

If you think about it, it's almost as if humankind got kicked out of the hunter-gather Garden of Eden where childbirth was less painful and quicker, with less complications. Was the reason that the animals in the pre-agricultural world had been eaten almost to extinction?

The age of agriculture saw childbirth with increased pain for women, decreased stature, less robust bones, and for both, plowing the earth to reap one's bread by the sweat of one's brow. But what type of nutrition is causing women's pelvic depth to increase again in the last 30 years? And will it ever get back to the size it was 30,000 years ago when childbirth, say the archaeologists, was easier?