The Power of the Written Word in Ancient Israel 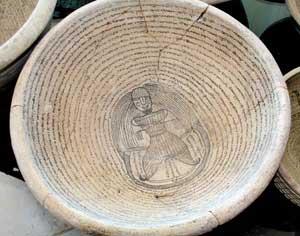 At the bottom of this magic incantation bowl from late antique Babylonia, a shackled and bound demon is shown surrounded by the spiraling words of a prayer for protection. It was believed that the written words of the encircling prayer would be able to keep the evil forces in the center of the bowl at bay. Throughout ancient Israelite and Jewish history, authors used writing as a sort of sympathetic magic, a way to directly control and manipulate forces beyond their control. Hershel Shanks

To the modern world, the written word is often taken for granted. We are so removed from the origins of writing that when we write something, whether on a piece of paper, on a sign or on the internet, we don’t even think about the physical act of creating words. For us, writing is simply a means to an end, an almost primordial and instinctive technology that we use to communicate with each other.

But 3,000 years ago, when alphabetic writing had just begun to spread across the masses of the ancient Near East, written words were far more than idle marks meant simply to be read. Words were repositories of power, physical vessels that gave material reality to one’s innermost thoughts and even the soul itself. So it was in ancient Israel.1

In the Hebrew Bible there are clear indications that writing was often thought to have tangible, even magical, properties. In Numbers 5:11-28, a woman accused of adultery is made to consume “the water of bitterness,” a cloudy concoction infused with the washed-off ink from the words of a written curse. If the woman is innocent, the curse will have no effect; if she is guilty, the curse will cause her thighs to waste away and her belly to swell. In a similar vein, when Ezekiel accepts his prophetic mission from God during a dreamlike trance, he eats a scroll inscribed with the words of the divine message (Ezekiel 2:9-3:11). Having ingested the words, Ezekiel and God’s message become one.

The magical properties of writing meant that written words, once they came into being, were active and sometimes even unstable forces that could be manipulated, both for good and for ill. Numerous short dedicatory inscriptions found in Iron Age Israel and elsewhere make requests for divine blessing and protection,* many having only the author’s name, what is requested and the name of the deity. As Biblical scholar Susan Niditch has said, it is as if the act of writing the prayer “[brought] the God-presence into a sort of material reality,” thus allowing the words to become infused with “visceral power.”2

But just as writing could help an author’s prayers get answered, it could also be used to inflict pain and suffering. Curse inscriptions often protected tombs, monumental inscriptions and seemingly mundane graffiti throughout the ancient Near East, and ancient Israel was no exception.** In a world where the simple act of erasing an author’s name was tantamount to wiping out a person’s very life and essence, author’s went to great lengths to ensure that would-be vandals and robbers suffered the same fate. Hiram, a tenth-century B.C. king of Byblos, wrote on his sarcophagus that anyone who attempted to destroy his inscription would have their own inscription (i.e., life) blotted out. Likewise, the anonymous author of an inscription found at the seventh-century B.C. site of Horvat ‘Uza in the eastern Negev claimed that if the words of his text were not heeded, the grave of the disobedient reader would be destroyed.

Similar ideas about the transformative power of written words continued to persist among the Jewish populations of the Near East throughout antiquity. In late antique Babylonia (third–seventh centuries A.D.), for example, countless ceramic bowls were inscribed with prayers, curses and healing rituals written in the Jewish-Aramaic script.*** The spiraling, cramped inscriptions of the bowls often encircled drawings of bound demons and other evil spirits. Writing, even in this late period, was still invested with the power to bring prayers and curses to life.