The poisonous garden plants once used as prehistoric weaponry

Archaeologists have long suspected that our Palaeolithic ancestors used poisonous plants to make weapons more lethal for hunting. However, there hasn’t been the technology to prove it - until now.

Dr Valentina Borgia is a specialist in Palaeolithic hunting weapons at the McDonald Institute for Archaeological Research and she has made it her mission to prove there is residue from poisonous plants on prehistoric weaponry.

Borgia works with forensic chemist Michelle Carlin, of Northumbria University, “I am an archaeologist with a grounding in classics, not a trained chemist. So I asked to collaborate with Michelle .”

Carlin works with organisations like Scotland Yard to analyse residues of illegal drugs such as cocaine by using a specialist technique called liquid chromatography-mass spectrometry.

Their difficulty was finding a way to analyse ancient samples without destroying them, but Carlin solved the problem, “She found a way to just touch the sample with cotton in pure water, so there is absolutely no destruction.”

It took some persuading to convince museum directors that the innovative technique was non-destructive when they asked if they could experiment on precious objects. The paper work paid off and they were able to test ethnographic materials from museums at Cambridge, Oxford and Rome. 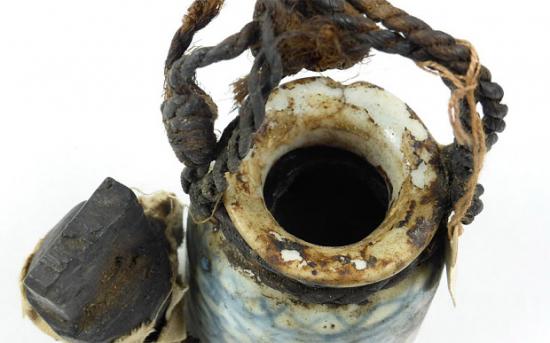 A pot of Aconitum from China, one of the objects tested (Museum Archaeology and Anthropology, Cambridge)
Borgia said, “We knew the ethnographic samples were poisoned with substances like aconite from monkshood and curare used in South Africa. What was exciting was that even after 100 years, we found it very easy to find isolated molecules to identify the right poisons.”

They have formed a database of poisonous plants to compare samples to with the help of Alnwick Garden. The Poison Garden at Alnwick is home to over 100 deadly plants, some of which are regularly grown in back gardens such as foxgloves and poppies. Other plants are so dangerous Alnwick has to apply for special licences from the Home Office. 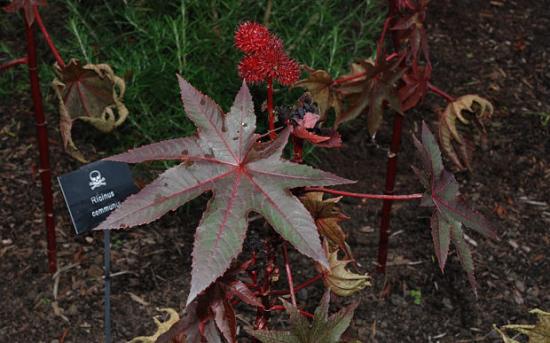 Ricinus communis in the Poison Garden at Alnwick (Margaret Whittaker)
Borgia has even taken to growing samples in her own office, “I know it sounds very strange, but these are actually normal everyday plants. I’m getting paranoid as I now know poisonous plants are everywhere.”

Borgia and Carlin are now testing 6000-year-old Egyptian arrows from the Phoebe A. Hearst Museum of Anthropology in California.

Around 40 years ago researchers took the black residue from the arrow heads and injected it in to a cat. Luckily the cat survived, but it could no longer walk suggesting the use of poison. Borgia noted, “It’s amazing how completely ethical issues have changed. It was absolutely normal to test on a cat then. At the beginning of the last century scientists would even test substances on themselves and record how they felt.” 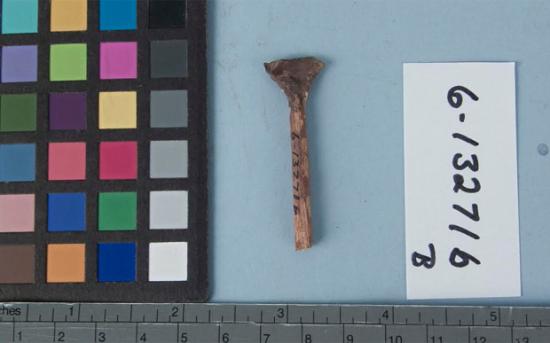 The Egyptian arrow with poison Borgia and Carlin are now testing (Phoebe A. Hearst Museum of Berkeley)

Scientific techniques have greatly improved since then. Borgia and Carlin’s first tests on the arrows suggest the use of acokanthera, a North African plant. They cannot yet say for certain as it is part of a compound, but they are confident in future analysis, “I think we have the potential to go back even further in time now we have the instruments.”

If they can prove the use of poisonous plants in prehistoric societies they can have a much better understanding of their hunting practices. The use of poison would show that these societies had a great awareness of their environment.

Borgia said, “We know more about prehistoric meat based diets than their plant based diet. Understanding their poisons will help us understand their awareness of plants and importantly, medicine. Poison is the ancient basis of medicine. For example curare was used as a poison by South American tribes, but also used as a cure for heart problems. It’s all in the dose.”