“The Plains Indians: Artists of Earth and Sky”

Some of the earliest surviving art by native North Americans left America long ago. Soldiers, traders and priests, with magpie eyes for brilliance, bundled it up and shipped it across the sea to Europe. Painted robes, embroidered slippers and feathered headdresses tinkling with chimes found their way into cupboards in 18th-century London and Paris, and lay there half-forgotten. Now, in “The Plains Indians: Artists of Earth and Sky” at the Metropolitan Museum of Art, some of those wondrous things have come home.

Of the about 130 pieces in the show, on loan from more than 50 international collections, those sent by the Musée du Quai Branly in Paris are exceptional: a drawing, on animal hide, of a half-abstract bird with prismatic wings; a raven-plume bonnet with feathers swept back as if hit by wind; and a bead-encrusted shoulder bag with a double-crescent design. They are all part of an exhibition that has to be one of the most completely beautiful sights in New York right now: But what would Europeans have thought when they first unpacked these objects in Paris centuries ago? 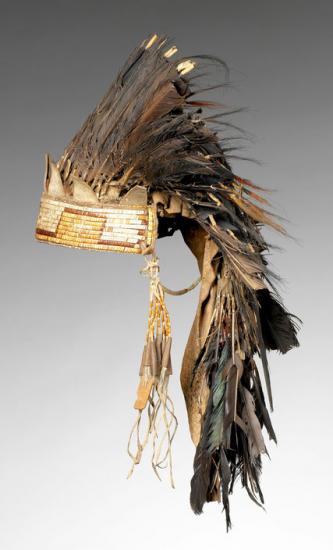 A feather headdress from the Eastern Plains or Western Great Lakes around the second half of the 18th century is one of about 130 pieces in “The Plains Indians: Artists of Earth and Sky” at the Metropolitan Museum of Art. Credit Musée du quai Branly, Paris, France

They might have noticed that the crescent emblems stitched on the beaded bag looked vaguely familiar. But from where? Moorish Spain. And the beads? They were glass, probably Venetian. Even a viewer who found the plumed bonnet outlandish might have admired the skill that had gone into weaving its headband from porcupine quills. And surely to 18th-century eyes, as to ours, the drawing of the great bird had a undeniable majesty and a sophistication that spoke of a deep history.

That history long predated the arrival of Europeans, as is demonstrated by the precious archaeological remains that open the show. The oldest is a carved stone pipe in the form of man with a double-bun hairdo and wearing a feather bustle, a feature of ritual attire to this day. The small sculpture may date to the first century B.C. and was found in a burial mound in what is now Ohio.

Its relatively heavy material suggests that the people who made it had settled lives. And its function is evidence of traditions sustained over time. For the first Americans, for as far back as we know, the sharing of a tobacco pipe was a ceremonial way to strengthen friendships and cement alliances. It was a gesture of intimacy and trust, like a mingling of blood, an exchange of breath. For this reason, pipes became as elaborately made and richly decorated as liturgical vessels in European churches.

With the arrival of Europeans on the Plains, life began to change. Spanish soldiers and ranchers, coming north from Mexico in the 16th century, introduced horses, which Indians quickly adopted, mastered and bred. Horses dramatically extended the range and efficiency of the buffalo hunt, a primary source of food and of hides for clothing and shelter. Plains people became increasingly mobile, moving seasonally with the herds and carrying their lives with them. Portability became a requisite, and never has the genre of art-you-can-wear been more inventively explored.

Painted robes, covered with figures and symbols and accessorized with leggings and gloves, became storyboards of oral history and epic adventure. One monumental example from the Branly collection, fittingly known as the Grand Robe, depicts, in more than a dozen episodes and with a cast of some 60 figures, the Homeric exploits of two Lakota warriors. There are debates over the gender of the artists of certain robes. But in general, paintings and drawings were done by men, and tanning, sewing and beadwork by women. And outstanding examples of beadwork, positioned throughout the show, glow with a kind of self-generated light.

An early-19th-century man’s shirt from the Upper Missouri River region, on loan from a museum in Bern, Switzerland, is sewn with just a few glass beads, like a sprinkling of fresh rain. A Central Plains woman’s dress, from around 1855, has more: rivers of blue beads flow from both shoulders. Elsewhere, that flow becomes a flood, completely drenching a rare fully beaded and fringed dress from around 1900, and washing over moccasins, gloves, tobacco bags, cradleboards, and masks for horses that turn horses into supernatural beings.

It’s a cliché to say that Native Americans were particularly in tune with nature. But everything in the show, organized by the Branly in partnership with the Met and the Nelson-Atkins Museum of Art in Kansas City, Mo., backs up this idea. You’re not in a humanist world where man is central, the crown of creation. You’re in a creaturist universe, where humans are just one more beast, and the most aggressive of all.

Images of animals, alive and dead, are ever-present. Most objects in the show are made from, or incorporate, parts of them. One extraordinarily elaborate early-19th-century pipe stem from the Eastern Plains or Western Great Lakes is the equivalent of a zoological reliquary, ornamented with matter from the bodies of sacred beings: horsehair, deer hair, porcupine quills, wood duck feathers and the scalp of an ivory-billed woodpecker, a bird now terminally endangered and possibly extinct.

At the same time, no culture produced more vivacious and emotionally empathetic depictions of animals, who were regarded as having sensitivities and knowledge beyond a human’s range. Sometime around 1850, an Arikara artist in North Dakota had a vision of his guardian spirit in the form of a buffalo, and for protection he painted its portrait on his shield. It’s in the show and the buffalo’s direct, candid gaze is unshakable and unforgettable.Slid

So is an image, carved in wood some 30 or 40 years later by a Hunkpapa Lakota artist of a horse apparently dying in battle. Now in the collection of the South Dakota State Historical Association, the figure was conceived as a tribute to a beloved animal killed under fire. Streaked with blood-red and stretched out as if strained beyond endurance, it has the pathos of a crucified Christ. In a history of great sculpture, past and present, from the North American continent, it has a place in the highest pantheon.

There are few saints in any history, and even fewer in a history of warrior culture, which is what American history, Native and otherwise, is built on.

At the same time, martyrdom exists, and the fate of native populations in the United States in the late 19th and early 20th centuries is just that. It remains a nation’s self-inflicted and unhealing wound. And to some extent, the show can’t help but be a memorial to it.

In the 1880s, a millennial spiritual movement arose among Plains Indians, expressed in a ceremony called the Ghost Dance. In a fit of hopeful miraculous thinking, its adherents envisioned the return of a precontact lost world, where the buffalo would be plentiful, the beloved dead restored to life, and the Plains would be American Indian lands again.

Material associated with the Ghost Dance comes toward the end of the exhibition: a woman’s dance dress, flame red, and painted with avian spirits — magpies, eagles, crows — and a shield with an image of a thunderbird divebombing from the heavens. More personal is a little dream-drawing owned by the Fenimore Art Museum in Cooperstown, N.Y. Done in pencil and ink on lined ledger-book paper, it depicts an avenging horned deity on a half-eagle, half-bison mount that could come straight from Revelations. It was drawn by the artist named Black Hawk, a traditional medicine man who may have died with other Ghost Dance followers at Wounded Knee. The exhibition’s curator, Gaylord Torrence of the Nelson-Atkins Museum of Art, assisted in New York by Judith Ostrowitz, could have ended the show there, on a tragic vanishing-people note. But wisely, and realistically, they did not. Instead, they bring the story into the present with work by inspired artists who carry Plains traditions into the 21st century.

There are classic pieces here by painters from the early- and mid-20th century, like Dick West, Francis Blackbear Bosin and artists known as the Kiowa Six, who depicted native life and religions — including the Native American Church and its peyote cult — in an illustrative mode that became the accepted “Indian” mode for a generation. Native art has since broken up into many styles and media, while resolutely monitoring the pulse of tradition.

The photographer Wendy Red Star spoofs the view of the Indian being particularly attuned to nature; in contrast, T. C. Cannon (1946-1978), in a painting of his grandmother as a kind of sky-walker, pregnant with his father, affirms that view. Some artists are politically very direct. In a painting, Arthur Amiotte, who has a terse, moving essay in the catalog, revisits Wounded Knee, where distant members of his family died. Others are what might be called spiritual activists. Through film images and sonorous chants — you can hear them as pure as a Gregorian chant in the distance as you enter the show — Dana Claxton evokes meditative rituals still very much alive today.

Clothing remains the great statement-maker and storyteller it has always been. The young California artist Jamie Okuma transforms store-bought shoes into killer-heel sculptures glinting with 24-karat gold beads. Rhonda Holy Bear stitches, in minute detail, doll-size versions of the hide-painted narratives from the past. And Bently Spang, a Northern Cheyenne from Montana, has made a protective “war shirt” that is really a peace shirt, stitched together entirely from family snapshots taken at home. We all wear our histories on us, whether we know it or not. Mr. Spang knows it, and loves it, and makes it art.

“The Plains Indians: Artists of Earth and Sky” continues through May 10 at the Metropolitan Museum of Art