The Origin of America’s Clovis Culture

I want to talk about the book Across Atlantic Ice: The Origin of America’s Clovis Culture. It was written by Dennis Stanford and Bruce Bradley, both highly respected archaeologists. The point they make in the book is very simple: An important archaeological culture known as the “Clovis” is actually a European culture that traveled east to west from Europe to North America, arriving first along the New England coast and then fairly quickly spreading across the US to the Rockies, and subsequently kinda petering out though there are bits and pieces of Clovis looking stuff farther west.

From the book’s publisher:

“ … Who were the first humans to inhabit North America? According to the now familiar story, mammal hunters entered the continent some 12,000 years ago via a land bridge that spanned the Bering Sea. The presence of these early New World people was established by distinctive stone tools belonging to the Clovis culture. But are the Clovis tools Asian in origin? 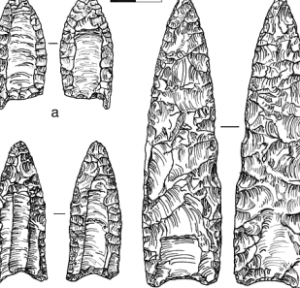 The authors apply rigorous scholarship to a hypothesis that places the technological antecedents of Clovis in Europe and posits that the first Americans crossed the Atlantic by boat and arrived earlier than previously thought. Supplying archaeological and oceanographic evidence to support this assertion, the book dismantles the old paradigm while persuasively linking Clovis technology with the culture of the Solutrean people who occupied France and Spain more than 20,000 years ago.… “

This flies in the face of everything everybody thinks, except for those of us who have been thinking that something like this may have happened all along. I’ve always thought this was possible, if not probable, for two reasons: 1) Clovis looks more like Europe than it looks like anything else, even though I don’t see any immediate comparison (contra Stanford and Bradley who do). I also don’t need an immediate comparison. I don’t need an archaeological culture that looks just like Clovis to be in Europe, since the time period during which such a culture would have existed was during lowest sea level stands. An entire sub-continent worth of land is now inundated by the sea, and if Clovis is truly coastal it would be truly invisible in Europe. Why did Clovis go from coastal to inland in the North Atlantic in the New World and not the old world? Stupid question. People do stuff like that all the time.

If you live many months of the year on the ice at the edge of the sea, Europe and North America are one place.

The second reason is even more compelling and is the first thing I noticed. Despite intransigent denialism  by North American archaeologist, Clovis appears in the east first, then moves west, and does not really cross the Rockies. No amount of pretending it is found first in the west (where it hardly exists) and moved east (against the tide of C14 dates) will change those facts.

One might suggest that this causes a problem because Native Americans are from Asia and Clovis can’t therefore be from Europe. It might help to know that in most places in North America, where Clovis occurs, it is followed by nothingness or at best not muchingness. There is very little continuity from Clovis to later cultures, not enough to require that the same people stuck around everywhere. I regard Clovis as one intrusion in to a mostly empty continent, not the first, not the last, probably preceded by relative but not complete emptiness in most places in North America, and followed, probably, but periods of population decline probably owing to climate change. But that’s just me; I don’t accept that the past is simple no matter how complex the present is. Rather, I think the complexity of human land use and migration is probably one of those general rules that applies across time and space at archaeological scales.