The Onion's Role in Ancient Egypt 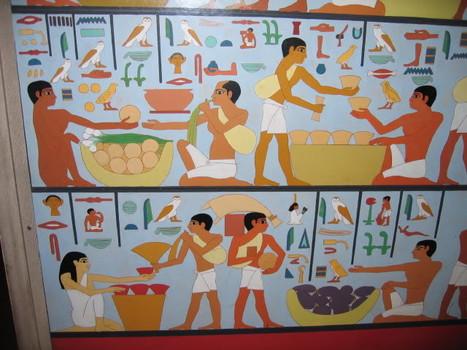 Historians purport that during the hunter-gatherer days of prehistory, edible root vegetables, such as onions and turnips, were gathered as food because they were protected by the soil even during the lean months. These root vegetables, in turn, may well have saved early mankind from starvation. Hence, the onion has been deemed to be a diet staple since ancient times. Archaeologists, food historians, and botanists have cited how this vegetable ranks amongst one of the earliest cultivated crops because of its inability to spoil during winter months, and its propensity to grow in a variety of climates and soils. Believed to have emerged from central Asia, the durable onion found its way to Egypt because of trade. Over time the onion became highly venerated in ancient Egypt, during both the Pharaonic Epoch and later as well during ancient Egypt’s Alexandrian Age. Indeed, of all the vegetables that ancient Egyptian artisans fashioned from precious metals, only the onion was made from gold. The onion’s hold on ancient Egyptian society is captured in a plethora of spiritual lore, artistic representation, medical papyri, and various cultural rites. By the time the Roman Empire dominated the world stage millennia later, Roman statesman Pliny the Elder would document in his classic text, Naturalis Historia, of the onion’s historic role in ancient Egypt, such as in oath-taking ceremonies. And later still, Roman poet Juvenal would satirize ancient Egypt’s adoration of onions as follows:

‘How Egypt, mad with superstition grown,
Makes gods of monsters but too well is known.
'Tis moral sin an Onion to devour,
Each clove of garlic hath a sacred power,
Religious nation sure, and best abodes,
When every garden is o'errun with gods!’

ANCIENT EGYPTIAN REVERENCE FOR THE ONION

The oldest evidence of the onion in Egypt dates from 3,500 B.C. Historians contend that in ancient Egyptian art, it is the onion that appears as the most frequently depicted vegetable, enjoyed by both high and low segments of society. Even Herodotus wrote of onions being used as a form of currency -- utilized, for instance, as payment to slave laborers working on the pyramids. After all, onions were an inexpensive source of hydrating nourishment, consequently helping to sustain droves of workmen in the empire-building years of ancient Egypt. Then, too, the Old Testament mentions how the post-Exodus children of Israel complained of their hunger due to a paltry desert diet. More specifically, the Book of Numbers (11:5) listed foods the wandering Hebrews missed from their time in Egypt; onions were among those itemized. Ancient Egyptians were well aware of the medicinal properties of the onion, which they consequently construed as magical attributes from the gods. Egyptian creation stories of Osiris, god of Egyptian underworld and afterlife, were equally associated with the onion. As such, ancient Egyptian priests have been pictured holding onions and heaping onion bulbs on altars. Similarly, Egyptian lore spotlighted how the milk teeth of Osiris’ son, Horus, fell to the ground and thence begat onion bulbs. And, in other incarnations, it is the white Eye of Horus that is used interchangeably with his baby teeth as the origin of onions. That the white Eye of Horus – Egyptian symbol of health, prosperity, protection, even royalty-- was associated with the bulbous vegetable justified ancient embalmers’ use of onions as false eyes in the mummification process. Moreover, the Eye of Horus was worn as a protective talisman, which gives clues as to why the onion was correspondingly utilized as a choice curative, preventive, and repellent anti-snake measure.

Dating as far back as 3,200 B.C., onions were detailed in tomb wall art, inscriptions, carvings, and altars to the gods. Pyramids, for example, featured onion bulb clusters and scallion bundles stacked atop festive banquet tables -- as bountiful gifts or as religious sacrifice. These offerings bestowed a strong spiritual significance to the role of the onion. In the Old and New Kingdoms, the onion symbolized eternal life with its concentric multilayers. That it was less perishable than other foods, and could be easily preserved for later consumption during drought or famine, elevated the mystique it held over ancient Egyptians. The antiseptic and deodorizing qualities of onions, meanwhile, made them ideal for inclusion in the mummification process. Bandages used for mummification were dipped in a mixture that included onions as ingredients. Preserved onions were also placed in and on the abdominal and chest cavities as well as the ears of mummies, while flowering onions were attached to the feet, and more onions still placed around the legs of the entombed. Such was the case with Pharaoh Ramses IV whose mummy had onion leaves placed in his eye sockets, too. Besides placing these bulbous vegetables within mummies, there have also been woven baskets filled with onions, even decorative wooden ones, as funeral offerings at burial sites. Archaeologists explain that a basket of onions was deemed a highly generous and respectable offering, ranking second only to a basket of bread. By the same token, several Egyptian Books of the Dead document Osiris as the deity and judge of the dead. Not surprisingly, ancient Egyptians seeking to gain favor with Osiris were buried with onions in hopes of being judged worthy enough to be granted eternal life by Osiris. Along these lines, the onion’s strong pungency prompted the ancients to believe the vegetable could breathe new life into the dead as they journeyed to the afterlife, making the onion a necessary commodity in a tomb so as to assist in awakening the decedent for the journey to the next world.

THE ONION IN ANCIENT EGYPTIAN FESTIVALS

Ancient Egyptian festivals also highlighted the bulbous vegetable’s ritualistic power. In the festival honoring Sokar, an agricultural deity invoked in the funerary rite of ‘opening the mouth’ as a parallel to the decedent’s entrance to the afterlife, onions played the requisite role of purifying the mouth as prelude to restoring the deceased to his otherworld heart. Some Egyptian Book of the Dead texts additionally describe how onions placed in the oral and nostril cavities guaranteed the decedent’s acquisition of the new breath of rebirth into the next world. By the New Kingdom’s era, Sokar was merged with Ptah and with Osiris to become the composite deity of Ptah-Sokar-Osiris. Interestingly, Ptah was the patron of artisans, Sokar of goldsmiths, and Osiris of vegetation, which explains why onions were the only vegetable to be crafted out of gold. Of note is that the united Ptah-Sokar-Osiris trinity coincided with the ancient Egyptian ritualistic union of the universe’s three cycles: creation, stability, death. Still another fete marking the importance of onions is the festival of Bastet. Bastet, symbolized by the sacred cat or lioness, was the Egyptian goddess of warfare and protectress against disease. Accordingly, the feline Bastet was considered defender of both the Pharaoh and Ra, corresponding in part to the ancient Egyptian respect for cats defending granaries and stores from both vermin and snakes. For ancient Egyptians, festivals coincided with seasons of the calendar. Typically onions were planted in ancient Egypt, with its Mediterranean climate, around the winter solstice then harvested at fully-mature size in time for the festival of Bastet, also known as the “chewing of the onions” festival. The festival likewise became an “anti-snake” celebration, since snakes were thought to hibernate near onion leaves until the ascension of the summer sun. Thus, to honor Bastet, who was believed to be the personified burning eye of Ra, meant acknowledging her protection from the burning summer sun and the impending arrival of snake season. Even more fascinating is how Bastet was also the goddess of perfumes and ointments, and that she was married to Anubis, the god of embalming. What’s more, feline Bastet was regarded by ancient Egyptians as a good mother, often depicted with her litters. Hence, any child-bearing woman desiring offspring often sported amulets of the goddess Bastet with kittens. The link was thereby forged between the use of onions and pregnancy that ancient Egyptian papyri would in time document.

THE ONION IN ANCIENT EGYPTIAN PAPYRI

As avid record-keepers, ancient Egyptians documented their knowledge in papyrus scrolls. Some of these papyri, like the Edwin Smith Papyrus, have become famous for the wealth of information they contain, and their mention of onions. The Kahun Gynecological Papyrus, for one, dates back to about 1825 BC and describes ancient Egyptian methods of using onions to test for female fertility and for pregnancy. But perhaps it is the 110-page “encyclopedic” Ebers Papyrus that is most famous for chronicling both magical spells and scores of medical remedies for thousands of ailments, with the onion as a major ingredient in many of these prescriptive remedies. The earliest sections of the Ebers Papyrus date back to about 3000 BC, making it the oldest surviving medical book to date. Within the Ebers Papyrus scrolls is reported the healing power of the onion in removing such ailments as colds, coughs, headache, insect stings, bites from a rabid dog, irritating skin disease whether exfoliative or ulcerative, digestive illnesses, toxins, obstruction, abdominal pain like constipation and indigestion, parasites, sciatica, joint pain, cardiovascular and cardiac problems, bronchial-pulmonary issues, breathing difficulties, asthma, hay fever, concerns about limbs and extremities, warts, even eye disorders. The Ebers Papyrus likewise expounds on the ancient Egyptian use of onions as anti-inflammatory medicine, circulation-enhancement, diuretic, bacterial antiseptic on cuts and scratches, perspiration-inducer, and mucous congestion thinner. Besides its standardized presentation of prescriptions, the Ebers Papyrus also imparted incantations and prayers that invoked the aegis of supernatural intervention, with the onion fashioned to trap evil influences in the home so as to minimize plagues and epidemics. The ancient Egyptians superstitiously believed a cut onion could absorb bad energy and germs, and onions tied around necks could ward off colds. Meanwhile, the Edwin Smith Surgical Papyrus provided toothache remedies concocted with the use of onions, showcasing how onions also had influence on ancient Egyptian proto-dentistry.