The Northern culture war : farmers slowed down by hunter-gatherers

Farmers slowed down by hunter-gatherers : our ancestors’ fight for space

Agricultural – or Neolithic – economics replaced the Mesolithic social model of hunter-gathering in the Near East about 10,000 years ago. One of the most important socioeconomic changes in human history, this socioeconomic shift, known as the Neolithic transition, spread gradually across Europe until it slowed down when more northern latitudes were reached.

Research published today, Friday, 3 December 2010, in New Journal of Physics (co-owned by the Institute of Physics and the German Physical Society), details a physical model, which can potentially explain how the spreading of Neolithic farmers was slowed down by the population density of hunter-gatherers.

The researchers from Girona, in Catalonia, Spain, use a reaction-diffusion model, which explains the relation between population growth and available space, taking into account the directional space dependency of the established Mesolithic population density.

The findings confirm archeological data, which shows that the slowdown in the spreading of farming communities was not, as often assumed, the result of crops needing to adapt to chillier climates, but indeed a consequence of the struggle for space with prevalent hunter-gatherer communities.

In the future, the researchers' model could be used for further physical modeling of socioeconomic transitions in the history of humanity. As the researchers write, "The model presented in this work could be applied to many examples of invasion fronts in which the indigenous population and the invasive one compete for space in a single biological niche, both in natural habitats and in microbiological assays." 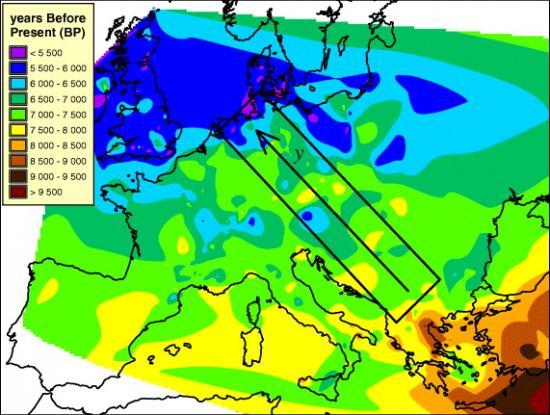 Chronology of the Neolithic wave of advance in Europe. Map obtained by interpolation of 765 early Neolithic data published by Pinhasi. The arrow corresponds to the y-direction in our model.