The Missing Link that Wasn’t 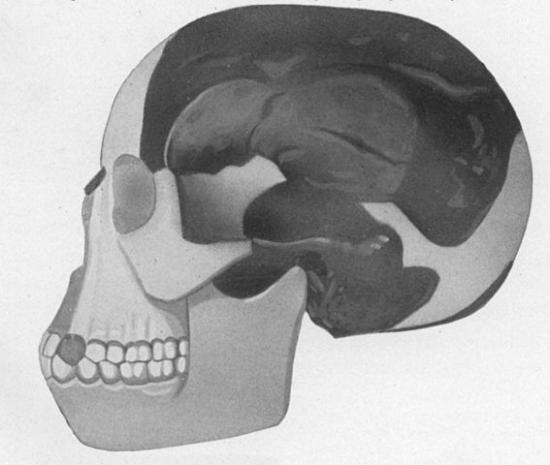 In 1912, many scientists believed they had found the missing link*. We were primed for it: Beginning with the discovery of Homo neaderthalensis, we had been chasing the story of our evolutionary history. Every find added weight to Darwin’s recently published The Descent of Man, and drove a frenzied scramble to find the oldest human fossil.

For European nations, claiming this “original” citizen would establish their identity in relation to their geography, but it would also award a status regarding development. They all wanted to be able to say that our earliest human ancestor was tied to theirnationality. It would be ultimate claim of nationalism. One by one, France, Spain, and Germany stepped forward to present their connection to a shared evolutionary history. Smaller countries like Indonesia, Belgium, and Holland also claimed a part of that story. And with each find, a pattern began to emerge in the fossils; despite clear evidence that these species had walked on two legs, their skulls were decidedly ape-like. It was not what people expected or wanted to believe. Flat skulls with thick, sloping foreheads, and snout-like faces were not the original citizens they wanted. They wanted examples that looked liked them. This means that despite numerous finds, the prize fossil—the transitional fossil that fit expectations—was believed to still be up for grabs.

This was good news for the English, who had watched from the sidelines as fossils were uncovered throughout Europe. There was a chance they could counter the proposition that their people had not really settled England (and that they were a nation of migrants—the horror!). In light of this overall sentiment, some might have considered it miraculous when amateur archaeologist Charles Dawson produced a skull in 1912 that contained all the desired traits, but many were completely swept away. They were caught up in seeing what they wanted to see.

Dawson claimed that the skull cap had been given to him by quarry workers near Piltdown in England in 1908. Return visits to the site produced additional pieces of the skull cap as well as animal bone and teeth. In May 1912, Dawson brought the skull to Arthur Smith Woodward, the Keeper of Geology at the British Museum, who excitedly returned with Dawson to the quarry where additional skull fragments were uncovered. Continued findings of animal teeth and bones suggested an estimated age of 500,000 years for the context of the dig, which securely established the skull as belonging to the oldest human ancestor in the world.

The excitement peaked when Dawson discovered a lower jaw that seemed to fit the skull. The jaw was damaged—the connective points were broken—but even without the missing pieces Dawson and other enthusiasts felt it was a good match because the molars indicated wear similar to that of modern humans. It was, I imagine, a true thing of beauty in comparison to the other known fossils of the day: no sloping, ugly forehead, no animal-like snout, no flat profile, and a cranial capacity at about 1,500 cc, which is close to the present-day average. Named Eoanthropus dawsoni (and commonly called Piltdown Man), the specimen represented a possibility many people very much wanted to consider: that our earliest human ancestor was intelligent in terms that we would resonate with the ways in which we measured intelligence today.

Dawson and Woodward presented E. dawsoni at a Geological Society meeting in December 1912, causing a great stir in the scientific community. While many wanted to believe and supported Dawson’s conclusions, some did call into question the difference between the jaw and the skull cap. Woodward was able to leverage his position to garner support, and E. dawsoni became widely accepted as the missing link. England finally had an entry into our evolutionary history, and just in case there was any question about the specimen’s nationality, an artifact that closely resembled a cricket bat was discovered on the site in 1914—so England’s national sport was also rooted in the evolutionary past.

Dawson died in 1916 leaving Woodward to champion E. dawsoni. However, it increasingly became an uphill battle: subsequent fossil finds produced more evidence of a bipedal ape-like ancestor. Piltdown man stood out as an anomaly. Several members of the scientific community stepped forward to challenge E. dawsoni’slegitimacy; they specifically questioned the possibility that the skull and the jaw came from the same individual. The canines that Woodward had produced to fill in the missing pieces of the jaw created an impossible scenario: they would have hindered side to side movement during chewing, which is the action that accounts for the wear on human molars. The size of the canines was also problematic: they would have needed to be much smaller in order to make them fit with the theory at hand. The solution would have been to test the fossils, but Woodward wouldn’t allow it. He claimed the fossil was too valuable to be made available and had it locked away.

The fossils wouldn’t be subject to the rigors of testing until Woodward died. In 1953 Piltdown Man was denounced as a complex fraud. Fluorine tests revealed that the fossils were less than 50,000 years old—in fact the skull was likely only about 600 years old! And extensive analysis of the bones showed that the jaw probably came from an orangutan; under a microscope it was clear that the teeth had been intentionally filed to help meet expectations. The bones appeared old because they had been stained. While this was a common practice at the time, it hinted at a darker motive when it was revealed that a museum volunteer may have stained the remains to get revenge on Woodward who had refused him a raise.

The actual perpetrator of the fraud remains unknown to this day. Dawson and Woodward are high on the list, but the cast of possible suspects is pretty large (and even includes Arthur Conan Doyle). Piltdown demonstrates the ways in which racism and nationalism has shaped science at different points in our history. This find greatly delayed our understanding of human evolutionary history and continues to be used as an example of a prominent lie in paleontology. But it’s also a great example of the ways in which science seeks to question itself. While the reputations of the men involved may have helped to push through the finding initially, it was not the final word on the matter. Calls for testing to validate the finds were made soon after the discovery and never quite went away. In this regard, Piltdown helped shape the nature of scientific inquiry. While the hoaxer may have technically gotten away, he also helped give us a legacy that does not rely on reputation and heresy and emphasizes objective reasoning.

But it also places more of a burden on the public and asks them to be critical in the information they consume. Piltdown Man gained popularity without support from online social sharing channels. News like this was limited to print and public discussions—actual physical discussions, not the online version of hangouts. People had to make an effort to consume and believe what they were told, and they did believe in this case because it was what they wanted to hear and see. We’re much quicker to question things today because we have the tools to share ideas quickly and access different sources of information, but these same tools give the public a voice to shape overall opinion. We’ve seen this recently with the rise of the anti-vax movement, as well as the consequences when these ideas take hold. How do we help moderate these spaces? Who should take the lead on these fronts? As science communication expands to these newer realms of sharing, are these the questions we should be considering?

*This phrase has fallen out of favor in recent years particularly in the scientific community because it suggests a linear evolutionary history, which we know is not the case. However, it is important to use in this context because this is precisely what scientists were searching for: a fossil that bridged the gap between apes and humans and clearly delineated the evolutionary path. The term missing link applies to any transitional fossil but it continues to ignite public imagination.