When a single genetic mutation first let ancient Europeans drink milk, it set the stage for a continental upheaval.

In the 1970s, archaeologist Peter Bogucki was excavating a Stone Age site in the fertile plains of central Poland when he came across an assortment of odd artefacts. The people who had lived there around 7,000 years ago were among central Europe's first farmers, and they had left behind fragments of pottery dotted with tiny holes. It looked as though the coarse red clay had been baked while pierced with pieces of straw.

Looking back through the archaeological literature, Bogucki found other examples of ancient perforated pottery. “They were so unusual — people would almost always include them in publications,” says Bogucki, now at Princeton University in New Jersey. He had seen something similar at a friend's house that was used for straining cheese, so he speculated that the pottery might be connected with cheese-making. But he had no way to test his idea.

The mystery potsherds sat in storage until 2011, when Mélanie Roffet-Salque pulled them out and analysed fatty residues preserved in the clay. Roffet-Salque, a geochemist at the University of Bristol, UK, found signatures of abundant milk fats — evidence that the early farmers had used the pottery as sieves to separate fatty milk solids from liquid whey. That makes the Polish relics the oldest known evidence of cheese-making in the world (1).

Roffet-Salque's sleuthing is part of a wave of discoveries about the history of milk in Europe. Many of them have come from a €3.3-million (US$4.4-million) project that started in 2009 and has involved archaeologists, chemists and geneticists. The findings from this group illuminate the profound ways that dairy products have shaped human settlement on the continent.

During the most recent ice age, milk was essentially a toxin to adults because — unlike children — they could not produce the lactase enzyme required to break down lactose, the main sugar in milk. But as farming started to replace hunting and gathering in the Middle East around 11,000 years ago, cattle herders learned how to reduce lactose in dairy products to tolerable levels by fermenting milk to make cheese or yogurt. Several thousand years later, a genetic mutation spread through Europe that gave people the ability to produce lactase — and drink milk — throughout their lives. That adaptation opened up a rich new source of nutrition that could have sustained communities when harvests failed.

This two-step milk revolution may have been a prime factor in allowing bands of farmers and herders from the south to sweep through Europe and displace the hunter-gatherer cultures that had lived there for millennia. “They spread really rapidly into northern Europe from an archaeological point of view,” says Mark Thomas, a population geneticist at University College London. That wave of emigration left an enduring imprint on Europe, where, unlike in many regions of the world, most people can now tolerate milk. “It could be that a large proportion of Europeans are descended from the first lactase-persistent dairy farmers in Europe,” says Thomas.

Young children almost universally produce lactase and can digest the lactose in their mother's milk. But as they mature, most switch off the lactase gene. Only 35% of the human population can digest lactose beyond the age of about seven or eight (ref. 2). “If you're lactose intolerant and you drink half a pint of milk, you're going to be really ill. Explosive diarrhoea — dysentery essentially,” says Oliver Craig, an archaeologist at the University of York, UK. “I'm not saying it's lethal, but it's quite unpleasant.” 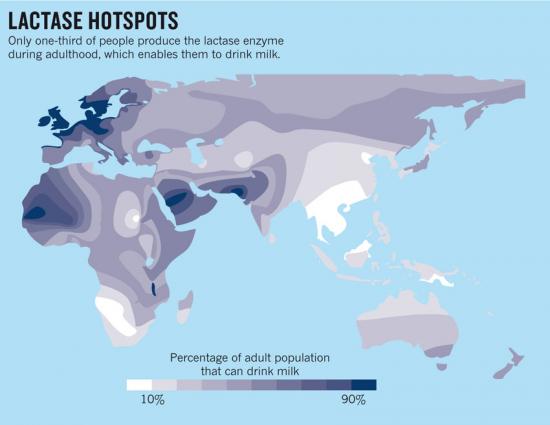 Most people who retain the ability to digest milk can trace their ancestry to Europe, where the trait seems to be linked to a single nucleotide in which the DNA base cytosine changed to thymine in a genomic region not far from the lactase gene. There are other pockets of lactase persistence in West Africa (see Nature 444, 994–996; 2006), the Middle East and south Asia that seem to be linked to separate mutations (3) (see 'Lactase hotspots').

The single-nucleotide switch in Europe happened relatively recently. Thomas and his colleagues estimated the timing by looking at genetic variations in modern populations and running computer simulations of how the related genetic mutation might have spread through ancient populations (4). They proposed that the trait of lactase persistence, dubbed the LP allele, emerged about 7,500 years ago in the broad, fertile plains of Hungary.

Once the LP allele appeared, it offered a major selective advantage. In a 2004 study (5), researchers estimated that people with the mutation would have produced up to 19% more fertile offspring than those who lacked it. The researchers called that degree of selection “among the strongest yet seen for any gene in the genome”.

Compounded over several hundred generations, that advantage could help a population to take over a continent. But only if “the population has a supply of fresh milk and is dairying”, says Thomas. “It's gene–culture co-evolution. They feed off of each other.”

To investigate the history of that interaction, Thomas teamed up with Joachim Burger, a palaeogeneticist at the Johannes Gutenberg University of Mainz in Germany, and Matthew Collins, a bioarchaeologist at the University of York. They organized a multidisciplinary project called LeCHE (Lactase Persistence in the early Cultural History of Europe), which brought together a dozen early-career researchers from around Europe.

By studying human molecular biology and the archaeology and chemistry of ancient pottery, LeCHE participants also hoped to address a key issue about the origins of modern Europeans. “It's been an enduring question in archaeology — whether we're descended from Middle Eastern farmers or indigenous hunter-gatherers,” says Thomas. The argument boils down to evolution versus replacement. Did native populations of hunter-gatherers in Europe take up farming and herding? Or was there an influx of agricultural colonists who outcompeted the locals, thanks to a combination of genes and technology?

One strand of evidence came from studies of animal bones found at archaeological sites. If cattle are raised primarily for dairying, calves are generally slaughtered before their first birthday so that their mothers can be milked. But cattle raised mainly for meat are killed later, when they have reached their full size. (The pattern, if not the ages, is similar for sheep and goats, which were part of the dairying revolution.)

On the basis of studies of growth patterns in bones, LeCHE participant Jean-Denis Vigne, an archaeozoologist at the French National Museum of Natural History in Paris, suggests that dairying in the Middle East may go all the way back to when humans first started domesticating animals there, about 10,500 years ago(6). That would place it just after the Middle Eastern Neolithic transition — when an economy based on hunter-gathering gave way to one devoted to agriculture. Dairying, says Roz Gillis, also an archaeozoologist at the Paris museum, “may have been one of the reasons why human populations began trapping and keeping ruminants such as cattle, sheep and goats”. (See 'Dairy diaspora'.)

Dairying then expanded in concert with the Neolithic transition, says Gillis, who has looked at bone growth at 150 sites in Europe and Anatolia (modern Turkey). As agriculture spread from Anatolia to northern Europe over roughly two millennia, dairying followed a similar pattern.

On their own, the growth patterns do not say whether the Neolithic transition in Europe happened through evolution or replacement, but cattle bones offer important clues. In a precursor study (7), Burger and several other LeCHE participants found that domesticated cattle at Neolithic sites in Europe were most closely related to cows from the Middle East, rather than indigenous wild aurochs. This is a strong indication that incoming herders brought their cattle with them, rather than domesticating locally, says Burger. A similar story is emerging from studies of ancient human DNA recovered at a few sites in central Europe, which suggest that Neolithic farmers were not descended from the hunter-gatherers who lived there before (8).

Taken together, the data help to resolve the origins of the first European farmers. “For a long time, the mainstream of continental European archaeology said Mesolithic hunter-gatherers developed into Neolithic farmers,” says Burger. “We basically showed they were completely different.”