The Golden Age of King Midas

The Penn Museum reveals newly discovered archaeology and artifacts of the royalty and kingdom of King Midas of the Golden Touch. 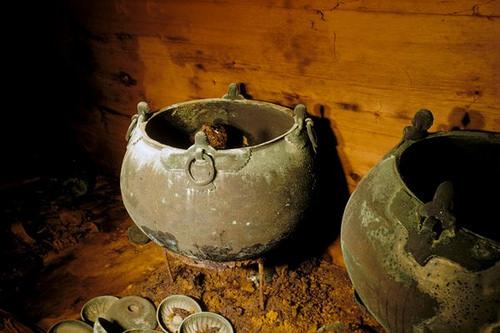 A partial view inside Tumulus MM—the burial chamber of a Phrygian ruler, probably the father of King Midas. Tumulus MM is the oldest known intact wooden building in the world. Exhibited: One of the three cauldrons found inside the tomb, probably all used for beer, features two siren attachments and two bearded demon attachments. Bronze drinking bowls are scattered across the floor of the tomb chamber, dated to circa 740 BCE, and excavated by the Penn Museum in 1957. Photo: 1957, Penn Museum Gordion Archive, G-2390.

What was behind the legendary story of King Midas and his golden touch?

That is the question to be answered—not with chests full of gold, but with a spectacular array of 150 objects, including more than 120 specially-loaned ancient artifacts from four museums in the Republic of Turkey, keys to telling the true story of a very real and powerful ruler of the Phrygian kingdom. The Golden Age of King Midas is an exclusive, world premiere exhibition developed by the Penn Museum, 3260 South Street in Philadelphia, in partnership with the Republic of Turkey. A special Opening Celebration on Saturday, February 13 kicks off the exhibition, which runs through November 27, 2016.

King Midas lived in the prosperous city of Gordion, a site in what is now central Turkey, circa 750–700 BCE, ruling Phrygia and influencing the neighboring kingdoms. He likely reigned during the time in which Homer’s Iliad was first written down. It was indeed a golden age.

Archaeologists from the Penn Museum (the University of Pennsylvania Museum of Archaeology and Anthropology) have been excavating at Gordion—and making international headlines with their discoveries—since 1950. The crossroads of many cultures over time, Gordion offers insight into thousands of years of history, but it is best known as the political and cultural capital of the Phrygians, a people who dominated much of what is now Turkey nearly 3,000 years ago. With its monumental architecture and a series of wealthy tombs belonging to Phrygian royalty and elites, Gordion has supplied the most important archaeological evidence for the unique material achievements of the once great Phrygian civilization.

From Myth to Man

Nearly 3,000 years after his death, we know King Midas by unforgettable stories told by ancient Greeks long after he was dead, stories like King Midas and the Golden Touch and King Midas and the Donkey Ears. An interactive “myth book” invites guests to explore the stories, while artifacts and excavation discoveries detailed throughout the exhibition begin to reveal the man behind the myths. The most extensive record of Midas’ activities comes from the annual records of the Assyrian kings, who referred to him as Mita, ruler of Mushku (Phrygia), on a clay tablet, ca. 713 BCE, on loan from the Oriental Institute of the University of Chicago for the exhibition.

A detailed timeline draws guests into the exhibition and back in time. It is at Gordion, where the story of Midas’ actual life and times truly emerges. One object from Greece takes center stage: an ivory lion tamer figurine on loan from the Delphi Archaeological Museum; it probably formed part of a throne dedicated by Midas to Apollo in the late 8th century BCE.

In 1957, the Penn Museum excavated a spectacular tomb, referred to as Tumulus MM, for Midas Mound. This was the largest of about 120 man-made mounds of earth, clay, and stone used to mark important burials at Gordion. Dated to ca. 740 BCE, it is believed to be the final resting place of King Midas’ father Gordios—a son’s spectacular tribute. The archaeologists entered the tomb, the oldest standing wooden building in the world, and beheld an extraordinary sight: the skeleton of a king in what was left of a cedar coffin, surrounded by the bronze bowls, serving vessels, wooden tables, and food remains from an extensive funeral banquet. The details of the banquet we now know thanks to the analysis of the sediment at the bottom of the vessels: a hearty lamb and lentil stew, and ample quantities of a drink containing wine, beer, and honey mead.

The discovery of an intact royal tomb nearly 3,000 years old is highly unusual, as is the excellent state of preservation of the associated artifacts. 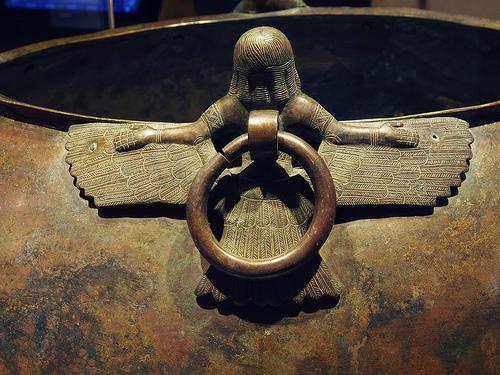 Exhibited: Detail of one of the three massive bronze cauldrons from Tumulus MM, tomb of a Phrygian ruler, probably the father of King Midas. The figure of a siren and the associated ring handle form one of four attachments on the cauldron. The cauldron probably once held an alcoholic beverage made of barley beer, grape wine, and honey mead, part of an elaborate funeral banquet for the deceased ruler. The cauldron dates to circa 740 BCE. It was excavated by the Penn Museum at Gordion in 1957. Dimensions—Height: 20.2 inches. Diameter: 30.7 inches (diameter at rim: 23 inches). Capacity: about 40 gallons [=150 liters].Photo: Penn Museum Gordion Archive, 2014_4080. 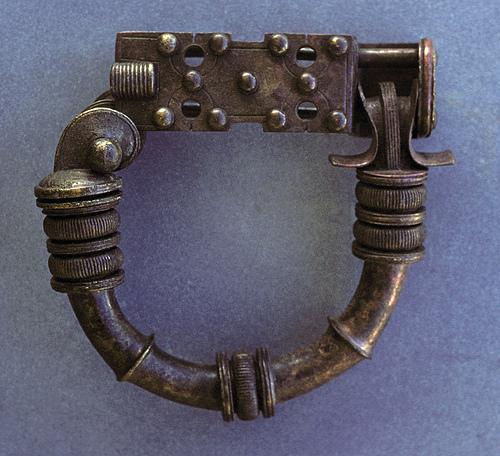 Guests to The Golden Age of King Midas meet a life-sized photograph of archaeologist Rodney Young at the entrance of a space designed to resemble the wooden tomb and featuring many of the very objects the excavators first encountered. Inside this space, a video experience lets visitors explore the tomb as if they were in the tomb itself when it was sealed nearly 3,000 years ago. Now housed in Turkish Museums in Ankara, Istanbul, Antalya, and Gordion, most of these extraordinary artifacts have never before traveled to the United States. Site videos, including scenes taken during the world-famous excavation in 1957, bring guests into the moment of discovery.

There are no known visual records of what King Midas looked like, but if he resembled his father, there is some intriguing evidence. In 1988, the Penn Museum worked with Dr. John Prag and Richard Neave of Manchester University to develop a reconstructed plaster head of Gordios based on his skeletal remains; a plaster cast will be on display in the exhibition. With it is a selection from an assortment of 189 large bronze fibulae, used for pinning garments, that were found in King Midas’ father’s tomb and in others; they may have been used as calling cards at the elaborate funerals.

Objects from five smaller tombs excavated at Gordion—including a child’s tomb that contained an elegant and distinctive goat-shaped jug—provide more information about the site and the people who lived and died there. While no gold was found in the largest tomb, jewelry from a later tomb, ca. 530 BCE, is featured, including a distinctive gold acorn necklace.