THE GOLD MASK OF TUTANKHAMON AND ITS SIGNIFICANCE

The Gold Mask of Tutankhamon and its significance 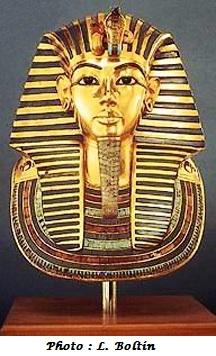 While Akhenaten professed singular devotion to the Aten or solar disk, the practice of age-old polytheistic rites persisted throughout the heretic's reign and thereafter. Mummification (the preservation of one's body after death to ensure safe passage to the afterlife) was among these rituals. Executed by priests over 70 days, the elaborate process was most closely associated with Osiris, the Egyptian god of the underworld. Despite his short-lived experiment in monotheism, even the disgraced Akhenaten was (poorly) mummified. The pharaoh's radical theology provided for his life after death, but not for that of his family and subjects.

Made of two beaten and burnished sheets of gold, Tutankhamun's somewhat idealized likeness weighs 10.23 kg (22.5 pounds). The glistening effigy's serene visage is strikingly similar to that of a wooden Shawabti Figure (ca. 1332-1323 B.C.), one of 413 found in the tomb's Treasury. A gift from the army general Minnakht, the statuette is vertically inscribed with hieroglyphic directions to perform a daily agricultural function on Tutankhamun's behalf in the hereafter. 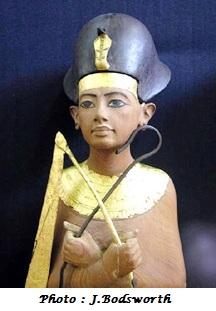 The pharaoh’s mask portrays Tutankhamun wearing the royal nemes headdress, its stripes of opaque blue glass imitating precious lapis lazuli. The vulture Nekhbet and cobra Wadjet, divine symbols of dominion over Upper and Lower Egypt, sit prominently upon his brow. These protective ornaments of solid gold are outfitted in blue faience, colored glass, carnelian, lapis lazuli and translucent quartz. Nekhbet's eyes are missing. The back of the headcloth terminates in a bound queue or pigtail. Beneath the nemes is a broad collar composed of 12 rows of lapis lazuli, quartz and green feldspar segments. A gold profile image of the falcon-headed god Horus, encrusted with obsidian and colored glass, decorates each end.

Tutankhamun's resplendent mask appears to be a faithful portrait of the youthful king. Its narrow lifelike eyes of black obsidian and white quartz, fleshy lips, nose and chin are comparable to his mummy's facial features. The eyes' lids and brows are made of lapis lazuli. Their distinctive kohl outlines, also of the same stone, simulate make-up used to shield against Egypt's intense sunlight. The earlobes are pierced for jewelry, although gold foil covered them when the antiquity was discovered. A removable and pleated false beard, emblematic of the ruler's holy status, is inlaid with faded gray-blue faience.

Religious Imagery and Inscriptions
The ancient Egyptians regarded gold as the flesh of the gods, making the malleable material appropriate for the fabrication of Tutankhamun's funerary mask. The deceased pharaoh was identified with Osiris, the judge of the dead, through his mummy and its various accoutrements.

A series of magical texts is engraved on the mask's shoulders and back. Among them is a version of a spell from Chapter 151B of the Book of the Dead, a collection of incantations meant to guide the deceased successfully to the hereafter. It invokes important deities' protection of the effigy's physical components, including the eyes, forehead, nape of the neck and hair.