Cantabria (Espagne): The environment in the course of 35,000 years reconstructed

The study by a multidisciplinary team of the UPV/EHU-University of the Basque Country combines, for the first time, data on microvertebrates, marine records and stable isotopes

UNIVERSITY OF THE BASQUE COUNTRY 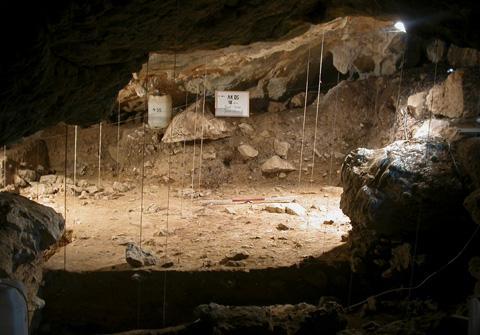 By combining three important palaeoclimatic records (small vertebrates, marine microfauna and stable isotopes of herbivores), a multidisciplinary team of the UPV/EHU has reconstructed past environments with the best resolution ever achieved. The study, led by Juan Rofes, currently a researcher at the Musèum National d'Histoire Naturelle, CNRS, Paris, has been published in the prestigious BritishScientific Reports, which is one of the Nature group journals.

This group of archaeologists, palaeontologists, geologists, geochemists and palaeo-oceanographers has for the first time reconstructed the environment covering a period of nearly 35,000 years of the Cantabrian Region during the Upper Pleistocene. To do this, they have combined three palaeoclimatic records: marine microfauna, small vertebrates and stable isotopes of herbivores. The latter two records come from the Antoliñako Koba site (Gautegiz-Arteaga, Bizkaia, Basque Country, Spain), an exceptional archaeological deposit containing a long chrono-cultural sequence of nine levels, ranging from the Aurignacian and going right up to the Epipalaeolithic. This site was excavated and processed over a 20-year period by the archaeologist Mikel Aguirre (UNED-Open University), who is also a member of the multidisciplinary team.

"The two principal merits of the study are, firstly, having compared the continental and marine records of the same region, filling the gaps that existed in the terrestrial sequence by using the marine record, which tends to be more complete; and, secondly, having produced a continuous palaeo-environmental reconstruction of the period between 44 and 9 million years before present in the Cantabrian Region", explained archaeozoologist and palaeontologist Juan Rofes. The article has been published by the journal Scientific Reports, which, owing to its high impact index (WOS 2014: 5.58), is the fifth most important multidisciplinary publication in the world.

Specifically, the changes in the communities of microvertebrates (mammals, amphibians and reptiles) and the stable isotope data (carbon and nitrogen) obtained from the bone collagen of deer in the continental site, have been compared with marine microfaunal evidence (foraminifera, planktonic and benthic species, ostracods and oxygen isotopes) gathered in the south of the Bay of Biscay by Dr Blanca Martínez-García (UPV/EHU). The sequence at the Antoliñako Koba site was dated by means of radiocarbon, which made it possible to compare the various signs with each other, and also with other known environmental records of the North Atlantic (sedimentary and pollen phases of the Cantabrian Region, variations in the sea level and ice cores made to the north of Greenland).

The research confirms a series of warm and cold events in the Cantabrian Region, which to a greater or lesser extent coincide with the climate evolution in the northern hemisphere during the Upper Pleistocene. "The contribution of this exhaustive palaeo-environmental reconstruction to regional and continental prehistory is unquestionable, since it enables us to get to know the climatic and environmental framework in which human groups in the past moved and which determined many of their strategies to adapt and survive. What is more, at this time of climate change increased by human pressure, it is a good idea to look at the past in order to learn lessons for the future," explained Rofes. The study came about during the postdoctoral training period that Juan Rofes (Lima, Peru, 1974), PhD holder of the University of Zaragoza, spent at the UPV/EHU's Faculty of Science and Technology. Today, he is on a European Union post-doctoral Marie Curie contract at the Musèum National d'Histoire Naturelle, CNRS, Paris.