The first civilizations in the Americas had their origins in the northern coastal valleys of the Peruvian coast, thousands of years before the Olmecs of Mexico. Only proven in the last decade thanks to the work of Ruth Shady at Caral, dozens of even older sites have now been discovered.

Caral, principal city of a civilization that has its founding traced back as far as 5000 years has given up a number of amazing surprises, one being the earliest quipu ever found which completely changed researcher’s ideas on their development and their age.

Not stopping there, Caral’s ancient people have offered up new opportunities for researchers to investigate. 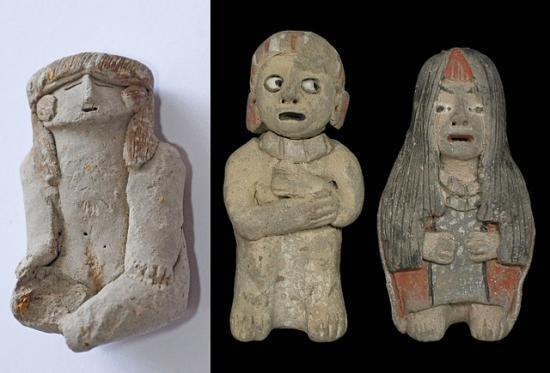 Found in the pyramid called La Huanca, the discovery of three well preserved clay figurines has the archaeology community overjoyed.

One great example shows a male figure of high social rank that was placed as an offering beneath a newer platform of the pyramid as part of a ritual when restoring the construction. The figure is nude and sitting with his legs crossed, his eyes closed and mouth semi-open. He has a headdress with five tufts on the back. Interestingly, his legs were broken off before being buried, these not being placed with the figurine.

In the La Cantera pyramid was found a female statuette without a head, without legs and just one arm – buried as an offering during the construction of a ceremonial room.

In the pyramid La Galería archeaologists found a clay head, originally part of a larger statuette of a male, also with a headdress that looks like a turban, in a similar style to the first figurine mentioned from La Huanca.

The statues have yielded considerable information about the complex social structure that characterized the Caral civilization. They are thought to have replaced human beings in sacrifice rituals related to the renovation of buildings and to fertility.

They have also provide invaluable information about different styles of clothing, hairstyles and headdresses as indicators of gender.

The discoveries have also highlighted the importance women had in social structures, as evidenced by two statues discovered in recent years in the nearby site of Miraya of a priestess and her male companion. The woman, of high social status is shown in a solemn position in lavish attire and with many ornaments. The male is clearly shown to be waiting on her decision.

It seems women in these earliest of civilisations were often found in positions of importance, something seen in many of Peru ancient cultures.

So far, archaeologists in the Supe valley have found over 150 figurines, all made of unbaked clay from 5 to 11 cm in height.