The Archaeological Quest for the Earliest Christians

Part one of a two-part examination

The race for the next spectacular artifact is on. Ancient bone boxes, lost manuscripts encoded with secret messages about Jesus, even fragments of crumbled papyrus—some no bigger than the receipts we stuff in our pockets—promise hope of a brave new world in Biblical studies. The assumption seems to be that if we just look a little harder, if we just dig a little bit deeper, one day we’ll find the one piece of evidence that will take us back to the earliest age of Jesus and his followers. To many, it’s an urgent archaeological mission with profound implications for the history of faith.

Just don’t hold your breath. For almost two hundred years after the crucifixion, Roman cities are entirely devoid of any trace of early Christians; to date, no one has ever found any object that’s been plausibly connected to them. As an archaeologist and a historian, I think it’s time we start taking this silence seriously and stop trying to fill it with any more sensational “discoveries.” Many of Jesus’ followers—men and women who lived in the first, second and even third century Roman Mediterranean—simply didn’t want to be found.

That’s not exactly the first thing that usually comes to mind when we think about early Christians, but the evidence is insurmountable at this point. For almost four hundred years, there were no manger scenes anywhere in the Roman world. There were no crucifixes displayed in homes or schools. There weren’t even any bound Bibles tucked into church pews. In fact, we actually don’t even know what “churches” looked like, at least, not until the middle of the third century. For a community that would later come to remember its earliest history as a time of vicious persecution, answered with outspoken acts of martyrdom, this archaeological silence poses a slight problem. Where are these people?

There are two assumptions people usually rely upon to explain the silence. The first is that Scripture, which is to say, the Second Commandment of the Hebrew Bible, prohibited Jesus’ followers from dabbling in anything artistic. The second is that early Christians were too poor and disenfranchised to leave anything noticeable behind. New archaeological and historical research suggests that neither of these traditional explanations are adequate. This post is the first in a two-part series that will explore each of these issues, charting some new directions in the study of early Christianity.

So let’s tackle the first question. Did the Mosaic commandment forbidding the creation of graven images (Deuteronomy 5:8) really prohibit Jesus’ earliest followers from pursuing their own artistic talents? Recent work on Jewish material culture during the late Second Temple period has shed new light on this topic. At the center of this picture is a twenty-year-old boy, Alexander the Great, and the legacy he left behind in the eastern Mediterranean in the third, second and first centuries B.C.

By the time of Alexander’s successors—the Seleucid family in Asia Minor and the northern Levant, the Ptolemies in Egypt and the southern Levant—sounds of Hellenistic art and craftsmanship were beginning to echo on the shores of the eastern Mediterranean. A visit to two cities makes that clear. At the city of Hellenistic Marisa (today known as Maresha, a site near Bethlehem), archaeologists found tomb chambers with paintings of animals and landscapes that are stylistically similar to those seen at sites like Vergina, Greece, an important site for the Macedonian kings. The animals depicted at Maresha may even have been inspired by a famous Hellenistic zoo, organized by the Ptolemies at Alexandria. The paintings at Maresha have been dated to the third and second centuries B.C.. 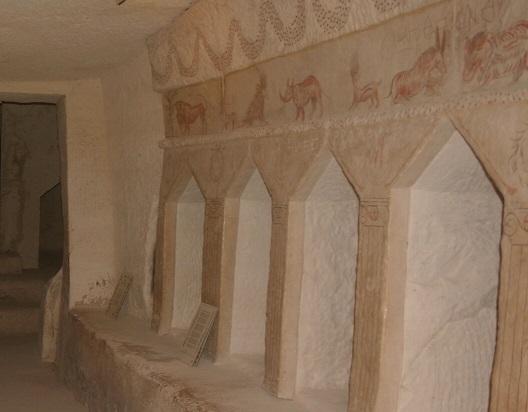 A melange of animals—some real, others exotic—populate the upper registers of a tomb at the Hellenistic city of Maresha. The paintings on site are restored versions of the originals, which dated to the third and second centuries B.C. Photo: Douglas Boin.

Evidence in Jerusalem reveals similar examples of cultural exchange during this time. Representations of ships and anchors appear in many Jerusalem tombs during the late Second Temple period. Some monumental tombs built in the Kidron Valley, in the shadow of the Second Temple, incorporate architectural styles that were also widely popular. Both the tomb of the sons of Hezir, dated to the second century B.C, and the so-called Tomb of Absalom, dated to the first century A.D., draw upon Greek columns, capitals, friezes—even Egyptian pyramid forms.

Doric and Ionic columns, friezes, even an Egyptian pyramid shape provided the architectural vocabulary for these two tombs in Jerusalem in the late Second Temple period. These are located east of the Temple Platform, in the Kidron Valley of Jerusalem. Photo: Douglas Boin.

Jewish individuals and groups during the late Second Temple period may have been waging fierce debates amongst themselves about the role of Hellenistic customs in the formation of their Jewish identity—debates we pick up in our textual sources, like 2 Maccabees—but the archaeological evidence is clear: The Second Commandment given to Moses did not prevent Jews from making images. It prevented them from making idols. Appreciating this nuance in the history of Jewish art and archaeology is an important first step to seeing early Christian archaeology in a new light, too.

In sum, how have we ever come to believe that Christians harbored an innate artistic hostility of their own, taught to them in the Second Commandment, when Jews who read their own Scripture came to entirely opposite ideas? To understand why we haven’t been able to find Jesus’ earliest followers means setting aside long-held assumptions like these. In my second post, I’ll tackle another one: Were early Christians so poor that they were never able to afford nice things? The answer to that question, too, is not the one we may think we know.