Thanh Hoa (Viet Nam) : A stone road dating back to the 14th century

A stone road dating back to the 14th century has been discovered at the remains of the Ho citadel complex in the central province of Thanh Hoa.

The 2km road linking the citadel's southern gate with the Nam Giao worship platform has been described as the "most beautiful old stone road ever built in the country". 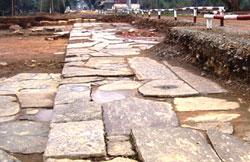 Royal road: The 2km road linking the Ho citadel's southern gate with the Nam Giao worship platform has been described as the most beautiful old stone road ever built in the country. — File Photos 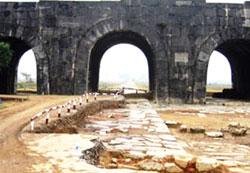 Archaeologists excavated a total area of 1,500sq.m in front of the southern gate revealing blue stones as big as 1sq.m buried up to 1m below the surface.

The road is thought to have been used by the king and the royal family when travelling between the citadel and nearby Nam Giao worship platform to pray to heaven for peace and prosperity at the peak of Don Son Mountain.

Archaeologists have found the road mainly intact and discovered various antiques including metal spears, stone cannon balls and ceramic objects from the early period of the late Ledynasty (1428-1527) as well as architectural ornamentation from periods.

Researcher and director of the Ho Citadel Preservation Management Centre Do Quang Trong said the good state of the road was thanks to the time and energy the original builders put into construction.

"So far, this is the most beautiful old stone road found in the country," he said.

The road has been listed in the heritage file of the citadel to submit to UNESCO by the International Council on Monuments and Sites, a professional association that works to conserve and protect sites of cultural heritage around the world. The association hoped the road would be listed among the oldest stone paths of royal citadels in Southeast Asia.

Archaeologists also hoped to unearth remnants of a bridge at the southern gate that is mentioned in various historical sources.

Excavation will continue at both sides of the southern gate, three other gates and within the palace complex.

The citadel, mentioned in Dai Viet Su Ky Toan Thu (The Complete Annals of the Great Viet), was built during the reign of King Tran Nhuan Tong (1397) by Royal Mandarin Ho Quy Ly, who acceded to the throne in 1400.

It was recognised by UNESCO as a World Cultural Heritage site last June.

Curved stone gates face north, east, south and west and were found to be intact. The southern entrance, which consists of three curved gates, acted as the main entry point, and its design was a departure from the traditional Chinese-influenced design found in similar citadels. — VNS