A French explorer's ship that sank in the Gulf of Mexico in the 17th century is to be rebuilt after undergoing a complex freeze drying operation, the first such undertaking of its size. 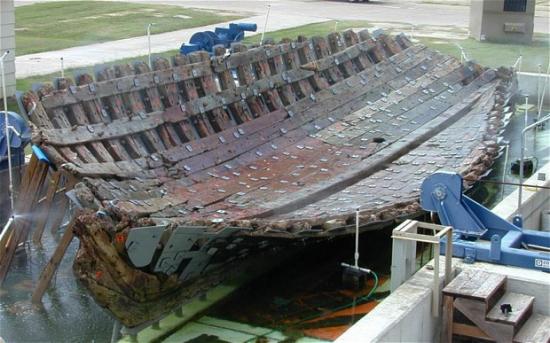 By placing the ship – La Belle – in a constant environment of up to 60 degrees below zero, more than 300 years of moisture will be safely removed from hundreds of European oak and pine timbers and planks.

The freeze-dryer, located at the old Bryan Air Force base several miles northwest of College Station, is 40 feet long and 8 feet wide – the biggest such machine on the continent devoted to archaeology.

Researchers will then rebuild the 54 ½-foot vessel, which will become the centrepiece of the Bob Bullock Texas State History Museum in Austin.

From a historical perspective, it's "an icon of a small event that dramatically changed the course of Texas history," said Jim Bruseth, who led the Texas Historical Commission effort to recover the remains.

The ship was built in 1684 and sank two years later in a storm on Matagorda Bay, about midway between Galveston and Corpus Christi. Captained by Rene-Robert Cavelier Sieur de La Salle, he hoped to colonise Texas for France.

"When La Belle sank, that doomed La Salle's colony and opened up the door for Spain to come in and occupy Texas," Mr Bruseth said. "People can see firsthand how history can turn on a dime."

Researchers have determined that unlike earlier vessels, the frames on La Belle were marked specifically by the French craftsmen so the wood comprising the hull could follow the complex curve of the ship.

After a more than decade-long hunt, Texas Historical Commission archaeologists found it in 1995 in 12 feet of murky water. Then began the tedious recovery that involved constructing a dam around the site.

After the water was pumped out, teams dug through up to 6 feet of mud in the Gulf of Mexico seabed to retrieve the nearly intact ship and some 700,000 items, from swords, cannons and ammunition to beads and mirrors intended for trade. Archaeologists also found one skeleton, believed to be a crew member or settler among the some 40 people aboard.

The ship was then transferred to the Texas A&M lab, where the waterlogged wood has been immersed in a chemical solution to keep it solid.

Initially, the ship was being reassembled in a two-stage chemical process, but as oil prices rose, so did the cost of the key chemical, polyethylene glycol. They decided the freeze-dry process was more economical and would shorten the preservation time frame. So, the hull was disassembled and the wood was categorised and digitally scanned so that they could make molds of its original shape.

A similar preservation using freeze-dryer technology is planned for a medieval ship discovered in 2002 in Newport, Wales. That vessel is about twice the length of La Belle.

The La Belle rebuilding will start late next year at the Bullock Museum.

Rene-Robert Cavelier Sieur de La Salle was the first European to travel the Mississippi River south to the Gulf, claiming all the land along the Mississippi and its tributaries for France in 1682. In 1685, he sailed from France with more than 300 colonists aboard four ships, La Belle among them, to establish a settlement at the mouth of the Mississippi.

Maps of the time show he believed the river was closer to Mexico, and his expedition missed the Mississippi by hundreds of miles.

His team established a colony near Matagorda Bay, but it was ravaged by disease, rattlesnakes and Indians. Three years later, La Salle led a handful of survivors inland in search of the Mississippi. The explorer didn't make it out of Texas; he was murdered by his own men.