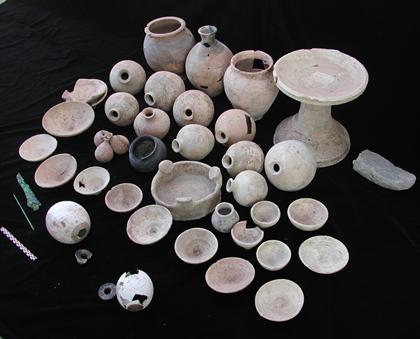 Battling nomads earned you buckets of trouble around 2,500 B.C., reports an international archeology team. Scars too.

But at least you earned yourself a fancy burial.

"Intensive excavations in the Near East, which have been carried out for over 100 years, show that this region merits to be called a cradle of civilization," begins the International Journal of Osteoarcheology report led by Jacek Tomczyk of Poland's Cardinal Stefan Wyszynski University.

The study team reports on two Bronze Age burials in a tomb from the ancient trade town of Terqa, a Mesopatamian archeological site in modern-day Syria.

"The tomb from Terqa consisted of two chambers with stone domes. The smaller chamber contained many luxury grave goods, including jars, plates and pieces of ancient jewellery. The artifacts were placed in an orderly manner, one upon another. Small animal bones and crushed ostrich eggshells indicate that this part was visited by people who left there some offerings. The other chamber was bigger and contained human skeletons," says the study.

"The skeleton is extremely heavy and large," says the study, which estimates the man died around the age of 45. Shoulder, back and upper arm bones look unusually thick, while his forearms and leg bones were "massive," says the study, all signs of a thickly-muscled fellow. All told he stood about 5'8", quite tall for the Bronze Age.

"Many muscular attachments were clearly marked on the bones and bone robustness was far above the average, which may suggest that the skeleton belonged to a warrior," says the study. "These observations correspond to the fact that the bronze parts of a coat and belt together with bronze weapon-blades were found on the right side of the hip."

The woman, who lived to at least 40, "was neither slim nor lightly built," says the study, showing signs of leg bone wear caused by long periods of squatting. She was about 5'3", more typical for the time.

Adding to the evidence for the warrior status of the dead man, the team reports he bore two healed cuts on his right upper arm about an inch to half-inch long. "The wounds are deep and long," says the study. "There are many instruments which might have caused this type of injury, like an axe, a sword or a hatchet. It is, therefore, difficult to decide what tool was used to cause the damage, but we are sure that the blow must have been strong. The healed edges of the wound suggest that the man from Terqa survived after the wound was inflicted."

"The middle Euphrates valley was inhabited by the 'dimorphic society' of the nomadic and semi-nomadic pastoralists, who lived in the steppe, and by the agriculturalists who inhabited the river valley," Tomcyzk, by email. "The nomads were identified (as) 'the wild and uncivilized peoples' - they came from the desert. So it is not surprise that he had so many wounds."

But other skeletons from this period don't show such serious wounds, he adds, which leads to the conclusion that this person might been a notable warrior in the local community.

The researchers attempted to study the DNA of both skeletons, taken from tooth samples. But they only succeeded with the maternal DNA of the man, finding he belonged to the "K" grouping of such genes, a family traced to the Near East from about 14,000 years ago and South Asia even further back, about 53,000 years ago.

The team hopes to try the DNA analysis again, Tomcyzk says. "Unfortunately, the material from this tomb is quite soft," he adds. That's how it goes, even for the hardiest warrior.