Diet based on foraging, not horticulture 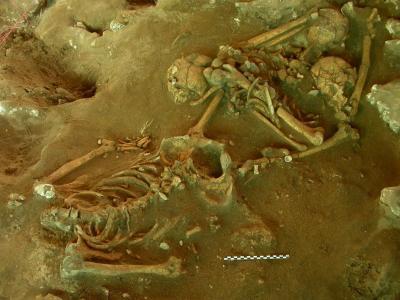 This image shows one of the examples of a multiple-burial from the 3,000-year-old Lapita cemetary in Vanuatu. The stable isotope data of diet was extracted from the bones of the people from this site and reveals answers to not only what they were eating but also tantalizing clues of socio-cultural aspects of their society. Credit: Hallie Buckley

Researchers from New Zealand's University of Otago studying 3000-year-old skeletons from the oldest known cemetery in the Pacific Islands are casting new light on the diet and lives of the enigmatic Lapita people, the likely ancestors of Polynesians.

Their results—obtained from analysing stable isotope ratios of three elements in the bone collagen of 49 adults buried at the Teouma archaeological site on Vanuatu's Efate Island—suggest that its early Lapita settlers ate reef fish, marine turtles, fruit bats, free-range pigs and chickens, rather than primarily relying on growing crops for human food and animal fodder.

The findings are newly published in the prestigious international journal PLOS ONE. Study lead author Dr Rebecca Kinaston and colleague Associate Professor Hallie Buckley at the Department of Anatomy carried out the research in collaboration with the Vanuatu National Museum and researchers from the University of Marseilles and CNRS (UMR 7269 and UMR 7041) in France and The Australian National University, Canberra.

Dr Kinaston says the study is the most detailed analysis of Lapita diet ever undertaken and provides intriguing insights into the socio-cultural elements of their society.

"It was a unique opportunity to assess the lifeways of a colonising population on a tropical Pacific island," she says.

The researchers analysed the isotopic ratios of carbon, nitrogen and sulphur in adult human bone collagen and compared these with ratios in ancient and modern plants and animals from the location, which provided a comprehensive dietary baseline.

"Examining these ratios gave us direct evidence of the broad make-up of these adults' diets over the 10-20 years before they died, which helps clear up the long-running debate about how the Lapita settlers sustained themselves during the early phases of colonising each island during their eastward drive across the Pacific."

Dr Kinaston says it appears that the new colonists, rather than relying mainly on a "transported landscape" of the crop plants and domesticated animals they brought with them, were practicing a mixed subsistence strategy.

"The dietary pattern we found suggests that in addition to eating pigs and chickens, settlers were also foraging for a variety of marine food and consuming wild animals—especially fruit bats—and that whatever horticultural food they produced was not heavily relied on," she says.

Isotopic analysis of the ancient pig bones found at the site also suggests that they were free-ranging rather than penned and given fodder from harvested crops.

Study of the human bones revealed a sex difference in diet compositions, showing that Lapita men had more varied diets and greater access to protein from sources such as tortoises, pigs and chicken than women did.

"This may have resulted from unequal food distribution, suggesting that males may have been considered of higher status in Lapita society and treated preferentially," Dr Kinaston says.

Early Lapita inhabitants of Vanuatu, a South Pacific Island, ate fish, marine turtles, and wild or domestic animals, rather than relying on horticulture during early colonization, according to a study published March 5, 2014, in the open-access journal PLOS ONE by Rebecca Kinaston from University of Otago in New Zealand and colleagues.

Around 3000 BP, human populations with cultural and biological links to South East Asian islands, a culture or people known as Lapita, sailed to Remote Oceania (islands of the tropical Pacific Ocean) with domestic plants and animals, a 'transported landscape,' which enabled the settlement of previously uninhabited Pacific islands in the area. However, the extent to which the Lapita people and their domestic animals relied on the transported landscape at Vanuatu, a sparse island, compared with native flora and fauna during the initial settlement period, remains uncertain. Scientists analyzed the nitrogen, carbon, and sulfur isotopes from the bone collagen of adults, excavated from the Lapita cemetery of Teouma on Efate Island, Vanuatu (ca 3000-2900 BP) against a dietary baseline, measured using both modern and prehistoric plants and animals, to assess the paleo diet of some of Vanuatu's earliest inhabitants.

The authors found that the nitrogen and carbon levels indicate that humans foraged for food, and that dietary protein at Teouma included a mixture of reef fish, marine turtles, fruit bats, and domestic land animals. Horticultural foods were likely grown and eaten at Teouma, but may not have been relied on heavily during the earliest settlement in Vanuatu. Males displayed significantly higher nitrogen values compared to females, possibly suggesting dietary differences associated with labor specialization or sociocultural practices relating to food distribution. Finally, the carbon levels in the settler's domestic pigs and chickens imply a diet of primarily plants, but their nitrogen levels indicate that they were also eating foods such as insects or human fecal matter, a diet of free range rather than pasture.