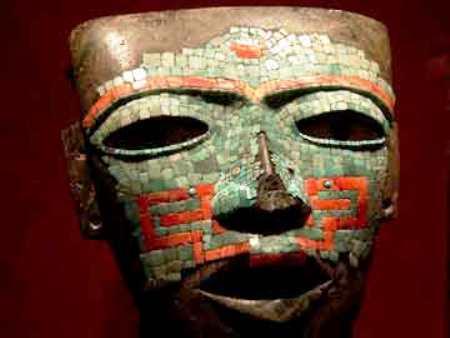 After a decade of controversy regarding the authenticity of Malinaltepec Mask, an investigation conducted by the National Institute of Anthropology and History (INAH) has verified it is original.

The book deals with substantial and assorted analyses that the piece made out of 762 tesserae with an approximate age of 1,800 years underwent. Among the studies are morphometric characterization, mineralogy, petrography, lapidary characteristics, technological analysis and adhesives used to paste decorations.
“Since its finding in 1921, the mask caused controversy among archaeologists: specialist Porfirio Aguirre thought he had just found one of the great treasures of Mesoamerica, while authorities thought it had been recently created.
“In early 2008 archaeologist Felipe Solis, then director of the National Museum of Anthropology (MNA), promoted the investigation of the Teotihuacan mask with the aim of clearing up any doubts”, commented Diana Magaloni, director of MNA, at the presentation of the book.
Since the piece was made in 2 different Prehispanic periods, the doubt regarding its authenticity was strong, so studies and analyses were conducted in 1921 to determine if it was original. Nevertheless, controversy did not end, explained restorer Martinez del Campo.

According to the specialist in charge of the INAH Funerary Masks Project, the team in charge of analyzing the archaeological object was amazed by the piece, its manufacture technique and the material that decorates it.
In 1921 it was determined that the mask was created with serpentine, but the results from the new mineralogical studies concluded that it is made of chloritite, a green-yellowish rock.
In the early 20th century expert reports, rock experts determined that most of the blue tesserae were confectioned with amazonite, being some manufactured with turquoise, which was verified by the 2008 and 2009 lithic analyses. There are also shell and hematite elements.
“It was confirmed that copal resin was used to glue up tesserae; there was a rumor that modern glue had been used as an adhesive, but the presence of copal allowed us confirming the mask was created in Prehispanic times”, declared Martinez del Campo.
“The work is product of an interdisciplinary investigation, gathering around the object more than 20 specialists in chemistry, mineralogy, petrography, biology, archaeology and anthropology.
“This is a mask of great quality, with different material inlay, a Teotihuacan object to which decoration was added up later, integrating the unity through time”, commented Eduardo Matos Moctezuma.

A piece that unites two periods of time

Malinaltepec Mask is a Teotihuacan-style funerary object used in 2 different moments: it was created during the Classic period (200-900 AD) and used again in a funeral during the Post Classic period (900-1521 AD). It is 21 centimeters both long and wide, and 762 tesserae are adhered to it. It is one of the emblematic pieces at the Teotihuacan Hall of the National Museum of Anthropology.
Restorer Sofia Martinez del Campo mentioned that when it was created, the mask was not covered with mosaic. Nearly 700 years after, amazonite tesserae were inlayed, a mineral that was associated by Teotihuacan culture to Chalchiuhtlicue, goddess of fertility and water.
“This is its meaning, according to the nose ornament made out of shell, the blue color of amazonite and turquoise, as well as the element in the front that might symbolize fertility and represent Malinaltepec.
“Mesoamerican people treasured pieces of past cultures, recovering Olmeca and Teotihuacan masks from funerary contexts and re appropriating them later to give them different uses”, detailed the restorer.
“Its function during the Classic period is unknown, it might have been part of a sculpture or attached to an architectural structure; during the Post Classic, it was used to bury it with an important character.
“It was then when they covered it with shell, turquoise and amazonite fragments, to give it the face of Chalchiuhtlicue; according to ancient beliefs, it would allow the departed to present in the underworld and ascend to the celestial level with the face of a divinity. We do not know if it was used by a man or a woman”, concluded Martinez del Campo. 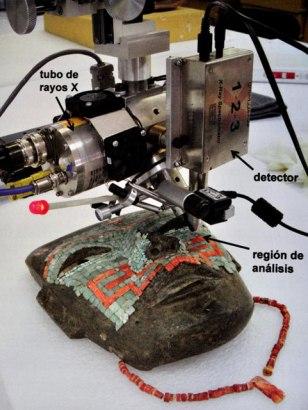