An eight-year project at, once the western hemisphere’s largest city, failed to locate its rulers’ tomb but findings offered tantalising clues to its origins

Teotihuacán: the discovery of liquid mercury beneath one of its pyramids fuelled hopes of finding a royal tomb – but what archaeologists did discover was unexpected. Photograph: apomares/Getty Images/iStockphoto

For decades, the hunt for a royal tomb at the ancient Mexican city of Teotihuacán has gripped archaeologists trying to unravel the secrets of the kingdom’s extraordinary political power.

It is a mystery investigators thought they were on the verge of solving in 2015, when large quantities of liquid mercury were found amid a treasure trove of precious artefacts in a secret tunnel.

Tiny troughs containing mercury were discovered along the 103-metre (338ft) corridor under the Pyramid of the Feathered Serpent, the third-biggest temple of the ruined city 35 miles (56km) north of Mexico’s present-day capital.

It was the first time the toxic substance had been found at an ancient site in Mexico, and the discovery fuelled expectations that the search for the tomb was almost over.

But after almost eight years of painstaking excavations inside the pyramid, hopes of finding the buried remains of Teotihuacán’s enigmatic rulers are fading.

A robot camera explores the 103-metre tunnel under the Pyramid of the Feathered Snake. Photograph: Courtsey of INAH/Project Tlalocan.

“At the beginning of this investigation we thought the tunnel was a metaphoric representation of the underworld, the place of creation and transmission of power, and that we would find a tomb of Teotihuacán’s leaders in this very scared place,” lead archaeologist Sergio Gómez told the Guardian.
“It would have been a transcendent discovery which would help us understand Teotihuacán’s power structure and system of government, but we have almost finished the excavation – and there is no tomb,” said Gómez.

Construction at Teotihuacán began around 150BC, and continued until 250AD. At its height, the city covered 21 square miles and was home to as many as 200,000 people, making it the largest city in the western hemisphere.

It was abandoned around 550AD.

Much of its history remains unknown. Archaeologists had hoped that the discovery of a royal tomb would help resolve whether the city was governed by family dynasties – as was the case with the contemporary Mayan civilization – or ruled by leaders who shared powers.

The 20-metre tunnel was discovered accidentally in 2003 when torrential rains exposed the entrance.

In 2009, scientists from the National Institute of Anthropology and History (INAH) became the first people to enter the tunnel in almost 1,500 years.

In 2014, archaeologists found three large chambers at the end of the tunnel, almost 20 metres beneath the temple. Excitement mounted with the discovery the following year that the earth appeared to have been sculpted into elegant miniature landscapes depicting mountains and valleys, with drops of mercury deposited to symbolize sacred rivers or lakes.

But the tomb was never found.

Dr Sergio Gómez, lead archaeologist on the Teotihuacán project. Photograph: Courtsey of INAH/Project Tlalocan.
The absence of a tomb could mean the chambers were never used for burial – or that it was removed at some point. The tunnel was sealed with debris around 250AD, but there are signs that it was re-entered about 530AD.

“We have evidence that something very large and heavy was dragged out of the tunnel at some point. It could have been a tomb, but we just don’t know,” said Gómez.

More than 100,000 objects have been recovered, which contributed to new understandings of the origins and status of the city.

Among the most significant artefacts are four almost perfectly preserved greenstone statutes – three women and one man – found near the entrances of the chambers.

The women were adorned with necklaces and earrings, and carried backpacks full of symbolic objects including tiny mirrors believed to help communication with the future and past. The mirrors and eyes are made from pyrite – or fool’s gold.

One female and the male were still standing when discovered at the end of the tunnel. 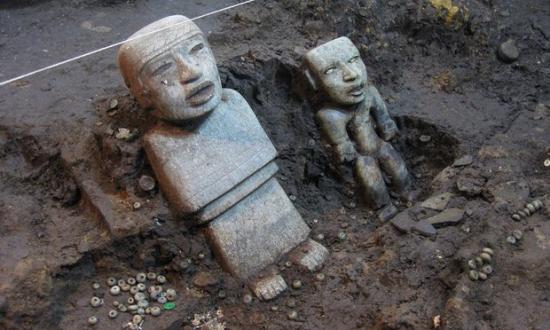 Two of the statues found standing in the tunnel. Photograph: Courtsey of INAH/Project Tlalocan.

“My hypothesis is that these sculptures represent the founders of Teotihuacán, those who had the power to decide the ideal place to establish a new city. They were standing because they were alive at the time,” said Gomez, a former psychologist.

The three female statues could mean women played a fundamental role in the power structure in the early phases of Teotihuacán, postulates Gómez.

“During the first period of Teotihuacán, its economic system and riches were linked to agriculture and women were heavily associated with the cult of fertility. But this changed and the smaller naked man probably represents this process of change.

“To me, these statues are even more exciting than finding a tomb as they tell us about the origins of Teotihuacán,” he said.

An array of gigantic conch shells from the Caribbean, Pacific and Gulf coasts were also found in the tunnel. Some are engraved with distinctive Mayan hieroglyphics, confirming strong ties between the elites of Teotihuacán and Mayan communities as far south as Guatemala and Belize.

Other relics include exquisite jade ornaments imported from Guatemala, woven straw mats probably reserved for the elites, rubber balls used in an ancient ball game, striking ceramics pots from neighbouring states, and animal bones from migratory birds, jaguars and even a bear.

The tunnel beneath the pyramid at Teotihuacán. Photograph: Courtsey of INAH/Project Tlalocan.

Most of the recovered objects are being painstakingly logged, restored and reconstructed at the onsite laboratories.

Exact replicas of the four sparkling green statues have been made in order to aid investigators as they try to make sense of the tunnel, chambers and abundance of relics.

After suffering two collapses during the excavation, the tunnel is considered too fragile and dangerous to open to the public. Instead, INAH will create an interactive virtual tour to guide visitors through the discoveries.