Teotihuacan (Mexique): an alcoholic beverage named pulque as early as 200 to 550 A.D 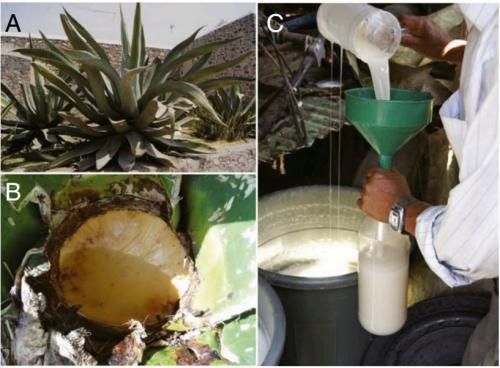 A team of researchers with members from Mexico, the U.S. and the U.K. has found evidence that suggests the people living in ancient Teotihuacan made an alcoholic beverage named pulque as early as 200 to 550 A.D. In their paper published in Proceedings of the National Academy of Sciences, the team describes how they performed gas chromatography on multiple pottery shard samples from excavation sites and found evidence of bacterial byproducts known to be present in pulque.

While most people are familiar with the Maya or Inca civilizations that existed in Mexico and South America, many may not have heard of Teotihuacan, a city that existed in what is now central Mexico. At its zenith, it's been estimated the city was home to approximately 125,000 people—though who exactly those people were, is still up for debate. Also a mystery was how the population was maintained during times of drought, which were known to have occurred frequently in the area. The main staple, maize, would have been adversely impacted by low rainfall as would have other less sturdy crops. In this latest effort, the researchers suggest that in addition to providing people with a jolt of alcohol, pulque would have offered many essential nutrients as well.

Pulque is made from the agave plant—its thick leaves are reminiscent of the aloe and yucca plants. It's the same plant used for the production of tequila, though a different part is used. With pulque, the sap is fermented to create a milky white thick beverage. To learn more about whether the people in Teotihuacan made the beverage, the researchers examined over 300 pottery shards that had been excavated from various sites in the city and that had been previously dated to 200 to 550 A.D. In so doing they found evidence of byproducts of Zymomonas mobilis, a bacterium known to have been present in the fermentation process used by other people such as the Maya. The find marks the oldest known production of pulque in Mesoamerica. The researchers note that in addition to providing nutrients, drinking pulque also has a tendency to make people feel full, which would have been a blessing during lean times.