A trove of Aztec sacrifices including a richly adorned jaguar dressed as a warrior and recently discovered in downtown Mexico City could lead archaeologists to the most tantalizing find yet: an Aztec emperor’s tomb.

Discovered off the steps of the Aztec’s holiest temple during the reign of the empire’s most powerful ruler, the sacrificial offerings also include a young boy, dressed to resemble the Aztec war god and solar deity, and a set of flint knives elaborately decorated with mother of pearl and precious stones.

The offerings were deposited by Aztec priests over five centuries ago in a circular, ritual platform once located in front of the temple where the earliest historical accounts describe the final resting place of Aztec kings.

None of these details have been reported before and such a discovery would mark a first since no Aztec royal burial has yet been found despite decades of digging.

The jaguar offering, found in a large rectangular stone box in what would have been the centre of the circular platform, has stirred particular excitement.

Only about one-tenth of the box’s contents has been excavated, but already a wide array of artefacts has been found near the top, including a spear thrower and a carved wooden disk placed on the feline’s back that was the emblem of the Aztec patron deity Huitzilopochtli, the war and sun god. 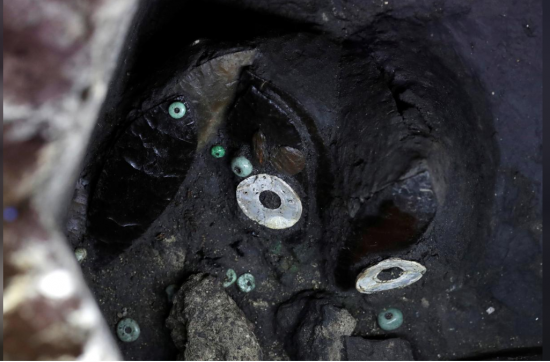 A layer of aquatic offerings placed on top of the west-facing jaguar have also been identified, including a large amount of shells, bright red starfish and coral that likely represented the watery underworld the Aztecs believed the sun travelled through at night before emerging in the east to begin a new day.

Antonio Marin, an archaeologist with the National Institute of Anthropology and History (INAH), works at a site where a 500-year-old partially-excavated stone box contains an Aztec offering including bars of copal used by Aztec priests for incense in ritual ceremonies, in Mexico City, Mexico March 14, 2019. REUTERS/Henry Romero

A roseate spoonbill, a pink bird from the flamingo family, has also been found in the offering. It was associated with warriors and rulers, and thought to represent their spirits in their descent into the underworld.

“There’s an enormous amount of coral that’s blocking what we can see below,” said archaeologist Miguel Baez, part of the team excavating the offerings at the base of the temple, known today as the Templo Mayor, located just off Mexico City’s bustling Zocalo plaza.

The Templo Mayor would have been as high as a 15-story pyramid before it was razed along with the rest of the Aztec capital Tenochtitlan after the 1521 Spanish conquest of Mexico.

Expanded by each Aztec king, the shrine was believed to be at the centre of the universe and was crowned with two smaller temples, one on the north side dedicated to the rain god Tlaloc and one on the south to Huitzilopochtil.

The latest offerings all align with the southern temple.

Several decades after the conquest, chroniclers detailed the burial rites of three Aztec kings, all brothers who ruled from 1469 to 1502.

According to these accounts, the rulers’ cremated remains were deposited with luxurious offerings and the hearts of sacrificed slaves in or near the circular platform.

In 2006, a massive monolith of the Aztec earth goddess was discovered nearby with an inscription corresponding to the year 1502, which is when the empire’s greatest ruler and the last of the brothers, Ahuitzotl, died.

Elizabeth Boone, an ancient Mexico specialist at Tulane University, notes that Ahuitzotl’s death would have been marked with lavish memorizing and that the jaguar may represent the king as a fearless warrior.

“You could have Ahuitzotl in that box,” she said.

A smaller stone box next to the jaguar offering containing a top layer of copal bars, used by Aztec priests for incense, has also been identified, though it too has only been partially excavated as both were only opened earlier this year.

Next to it another stone box has been found containing 21 flint knives decorated to resemble warriors, including the same war god disk but made of mother of pearl, as well as a miniature wooden spear thrower and shield.

Finally, an adjacent circular offering holds an approximately 9-year-old sacrificed boy found with a wooden war god disk, a jade bead necklace and wings made from hawk bones and attached to his shoulders.

Like the jaguar, the boy likely had his heart torn out as part of a ritual sacrifice, though further tests will need to be conducted to confirm the theory.

The offerings also speak to the geographic reach of the Aztecs, a warrior society like ancient Sparta that conquered neighbouring kingdoms to acquire tribute.

The starfish came from the Pacific Ocean, for example, while the jade was brought from Central America near present-day Honduras.

“The offerings provide a window not only into the (Aztecs) sacred world, but also their economic lives,” said Frances Berdan, an Aztec scholar at California State University, San Bernardino.

Meticulous sifting through the latest offerings is expected to continue for at least several more months, though practical hardships weigh on the archaeologists.

Mexico’s new government has cut the project’s budget by 20 percent this year, according to several archaeologists who work on the excavation, and nearly all members of the 25-person team have not been paid since December.