Tenochtitlan (Mexique): a offering underneath an statue of the goddess Tlaltecuhtli 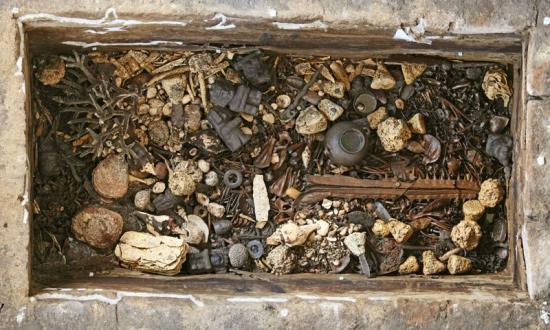 In May 2008 a team of researchers forming part of the Templo Mayor project of the historic centre of Mexico City, discovered a large offering which had been placed underneath an enormous statue of the goddess Tlaltecuhtli.

Underneath Mexico City lie the ruins of Tenochtitlan, the Aztec capital, and at its centre was the Templo Mayor. The project researchers believe that this offering was made during the reign of Ahuizotl, who was ruler of the Aztec empire for sixteen years, from 1486 to 1502, and in that time conquered 45 Mesoamerican territories. 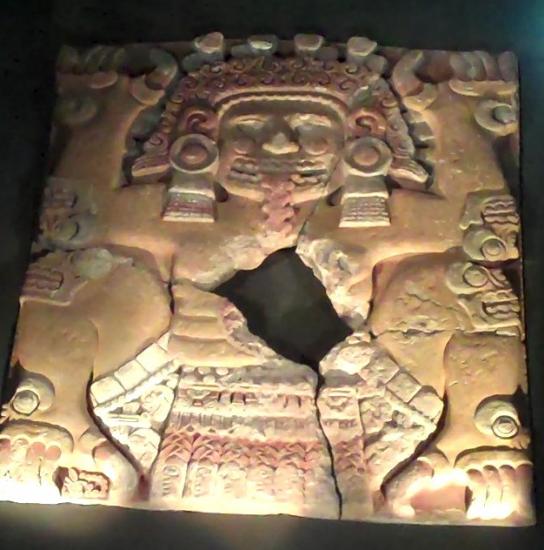 The Tlaltecuhtli monolith was discovered in 2006. Protoplasma Kid/WikimediaCommons (CC BY-SA 4.0

Offering 126, the largest found so far at the Templo Mayor, is composed of almost 4,000 organic remains, of which three-fourths (3,045) are marine molluscs. This material has been analysed by biologist Belem Zúñiga Arellano, a researcher at the National Institute of anthropology and history (INAH), who identified 111 species with 40 of them coming from the Atlantic, 66 from the Pacific, three found on both coasts and two from rivers.

Significantly, 40 species come from an area which includes the Gulf of Mexico, Florida, the West Indies, the Caribbean Sea, Venezuela and Brazil, and 66 from Baja California to Ecuador.

“This preponderance of species suggests on the one hand an expansion of the Aztec Empire during the reign of Ahuizotl, when he conquered populations of the Pacific coast, in the current states of Guerrero and Oaxaca. On the other hand, it also refers to trade relations with populations established to the south and the Caribbean“, said Zúñiga Arellano.

“By making a comparison with other offerings studied so far, it is interesting to note that, with the exception of the sixth construction stage (1486-1502), the other architectural expansions of Huey Teocalli or Templo Mayor show that there are more species from the Atlantic than the Pacific, which perhaps indicates a closer relationship with the Atlantic coast.”

The study of the 126 offering, associated to the monolith of the earth goddess, identified 83 new species, mostly molluscs from the Caribbean and Pan-American provinces. Photo project Templo Mayor, INAH

Zúñiga Arellano explained that most of the species that make up this offering are characteristic of marine environments and only a small proportion are found in brackish waters of estuaries, coastal lagoons, mangroves and marshes. These organisms also inhabit a wide variety of substrates, rock, sand or mud, coral reefs and sea grass of tidal zones from 0 to 5 metres deep. They were largely collected as empty shells on beaches, however, some appear to have been collected alive, which can be inferred based on the presence of colour, opercula (Nerita scabricosta), dermal scales of the belt (Chiton articulatus) and articulated shells (Spondylus calcifer, Spondylus princeps, Codakia orbicularis and Arcopagia fausta). The biologist also noted that to obtain Spondylus calcifer and Spondylus princeps which adhere to rocky surfaces between 10 and 15 metres deep, it would have been necessary to dive.

The analysis of Offering 126, said Belem Zúñiga, reveals the richness of this sacrifice dedicated to the Aztec earth goddess. The Templo Mayor examples contain the most prized species of fauna which were not those of local origin that could be used as a source of food or raw material for the manufacture of ornaments.

“On the contrary, they used species that were attributed to ritual qualities, so it is not surprising that they invested time and effort in obtaining molluscs from remote locations such as the Yucatan peninsula and the coasts of Sinaloa and Sonora.” Also it is clear “that the Aztec priests also put a lot of time and effort into the preparation and implementation of oblations that emphasised the diverse origins of the molluscs, aspects that also speak of the military and economic might of the Empire“.