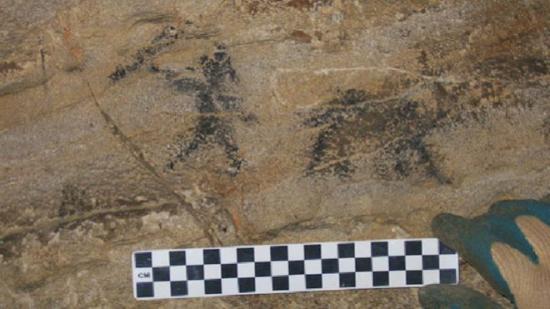 The oldest collection of prehistoric cave and rock art in the United States has been discovered in and around Tennessee. (JAN SIMEK, ALAN CRESSLER, NICHOLAS HERRMANN AND SARAH SHERWOOD/ANTIQUITY PUBLICATIONS) 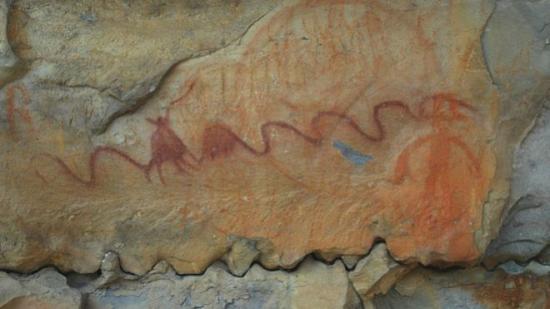 The oldest and most widespread collection of prehistoric cave and rock art in the United States has been found in and around Tennessee, according to a new paper in the journal Antiquity that documents the art. It provides intriguing clues about what life was like for Native American societies more than 6,000 years ago. That is the age of the newly discovered cave art, one of which is seen here, showing what appears to be a human hunting. Other images are of a more direct spiritual/mythological nature.

Lead author Jan Simek, president emeritus and a distinguished professor of science at the University of Tennessee’s Department of Anthropology, told Discovery News, “The discoveries tell us that prehistoric peoples in the Cumberland Plateau used this rather distinctive upland environment for a variety of purposes and that religion was part of that broader sense of place.” Jan Simek, Alan Cressler, Nicholas Herrmann and Sarah Sherwood/Antiquity Publications Ltd.

A very large polychrome pictograph depicts humans, serpents and circles. The image, from the same overall site, but extending into Alabama, likely illustrated a myth spread across generations via word of mouth, with such permanent imagery further preserving its meaning, lost to history.

Simek said one of the images is “a black charcoal pictograph from an East Tennessee cave showing a transformational animal with the head, body, and tail of a dog or cat and the curving talons of a bird. Transformation is depicted in prehistoric art in both open-air sites and in dark zone caves in Tennessee.”

He and his colleagues suspect that the open-air rock art and the cave art were connected as part of “an organized alteration of the landscape,” with the creators of the images mapping “their conceptual universe onto the natural world in which they lived.” This happened in three dimensions, with upper (celestial in nature), middle (plants and animals) and lower (darkness, death and danger) worlds matching content with where it was placed in the region.

Simek describes another image &quotof a bird was incised in wet mud banks deep inside Mud Glyph Cave in Tennessee. Mud, which is associated with the origin of the world by many Southeast native American peoples, was often used as a medium by prehistoric cave artists. This example is still plastic and therefore extremely fragile.”

Analysis of rock and cave art often employs non-destructive, high-tech tools, such as this high-resolution laser scanner operated by the RLS group in Chattanooga, Tenn. It precisely records the ancient art for conservation and analysis.

According to Simek, “Many of the images, like this black charcoal pictograph of a rayed circle from Dunbar Cave in Tennessee, can also be seen on portable religious objects found in temple mounds and other prehistoric religious contexts.”

Scorpions, with their painful stings, appear to have been part of the Native American vision of the “lower world.” At this extensive site, scorpion images were found in deep caves and not in the upper “celestial” area. In this case, an artist, or artists, produced the images by painting wet ashes onto the cave wall.

“These tiny turkey engravings from Tennessee were extremely difficult to photograph, since they are only a few centimeters long and composed of very shallow lines made with a fine pointed tool,” Alan Cressler, project photographer, told Discovery News.

“One of the best-known examples of Southeast cave art, these engravings of weapons and bird-human transformations form a complex composition in the dark zone of Devilstep Hollow Cave in Tennessee,” Simek said.

Co-author Sarah Sherwood of The University of the South, added, “Rock art sites are only one type of specialized activity site we see in the area; we know that people came to the Plateau to find specific foods, including animals and plants (in fact, certain native plants were domesticated in the area more than 3,000 years ago) and to obtain non-food resources; rock art was an integral part of how people conceived and used their landscapes.”