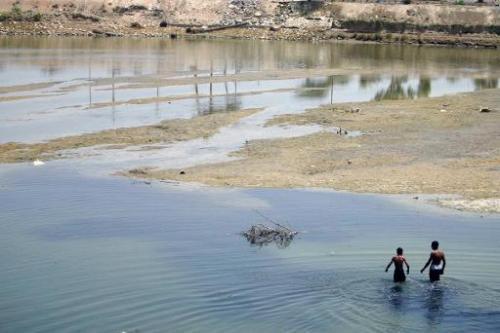 Iraqis wade in the waters of the Euphrates River in Hindiya on May 19, 2009

Forensic sleuths said Thursday they had found the oldest known egg of the bilharzia parasite, revealing how human advancement enabled a tiny freshwater worm to become a curse for millions.

In a letter published by the journal The LancetInfectious Diseases, a team of archaeologists and biologists said they found a 6,200-year-old egg of the feared intestinal parasite in an ancient grave in northern Syria.

The site, Tell Zeidan, is in the valley of the Euphrates—part of the fabled "Fertile Crescent" where humans settled down to farm nearly 8,000 years ago, making the historic leap from hunter-gatherer.

The team excavated the skeletal remains of 26 people from the burial site and gently sifted through sediment collected from the pelvic area of each. 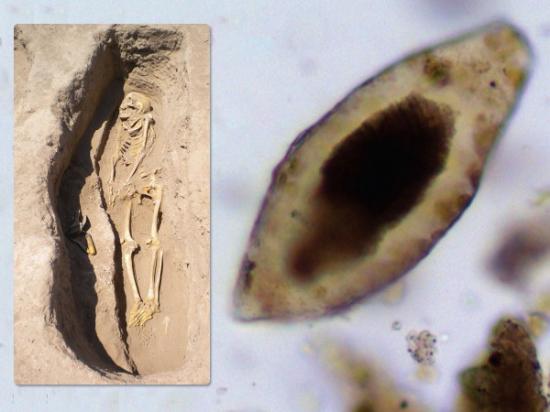 The painstaking work turned up an egg just 132 millionths of a metre long that under a powerful microscope turned out to be pale brown, stained by millennia-long exposure to the soil.

The egg, say the researchers, is from one of two species of schistosomes—flatworms that cause bilharzia, which affects hundreds of millions of people in tropical Asia, Africa and Latin America.

Schistosomes burrow into the skin when someone wades into freshwater, and develop into adult worms before invading the kidney and bladder or intestines.

Luxuriating in the balmy flow of blood, they mate, and their eggs are excreted in urine or faeces, thus exposing more people to the disease, which is also called schistosomiasis or snail fever.

Infection—typically signalled by blood in the urine—can result in kidney failure, bladder cancer, malnutrition and anaemia.

Riddle of the parasite

Recent DNA analysis of schistosomes suggested the flatworm evolved in Asia and spread from there to Africa and beyond.

But how this happened was unclear until now.

Migration through early human settlement in the Middle East, via the irrigation system of the Fertile Crescent, is a likely answer, according to the letter.

The people at Tell Zeidan grew wheat and barley in highly arid conditions, which suggests they developed an irrigation system to water their crops, it says.

If so, wading in the water channels would have been the likely infection source for the individual who carried the parasite, according to the probe headed by Piers Mitchell at Britain's University of Cambridge.

"Our findings suggest that crop irrigation 6,000 years ago in the Middle East enabled schistosomiasis to spread to people living there, and so triggered the enormous disease burden that schistosomiasis has caused over the past 6,000 years," the letter says.

According to the UN's World Health Organisation (WHO), more than 42 million were treated for bilharzia in 2012, and 249 million were given preventive treatment with praziquantel, the frontline drug for controlling the parasite.

The latest discovery also fits with other pieces of evidence.

They include the remains found at many ancient Middle East sites of freshwater Bulinus snails that provide a host for the parasite at an early stage of its life cycle.

There is also an ancient medical text found in modern-day north Iraq whose author described diseases that caused blood-stained urine.

And in 2002, schistosomes were found in Egyptian mummies—evidence that the wretched parasite was a problem for the people of the Nile 5,200 years ago.

Infection through irrigation could be the earliest known example of human technology enabling a disease to spread.

The health consequences probably had "a significant impact upon early civilisations in the region," said Mitchell.