Tell es-Safi/Gath : In Goliath’s hometown, the drama is in the details

The summer dig at the Philistine metropolis of Gath shows the unglamorous reality of archaeology — days of painstaking work bring the past to life, shard by shard 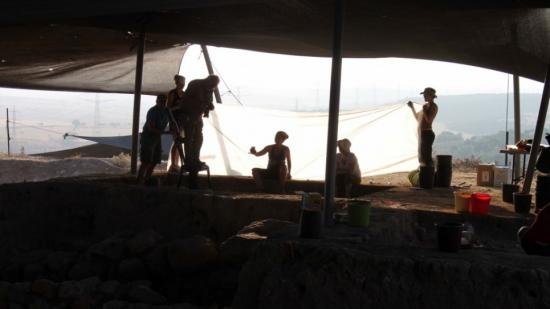 The Philistines of Gath have been gone for nearly three millennia, but their city comes to life every morning at 6 a.m. That’s when 150 workers from several dozen countries arrive, bleary-eyed, and begin sifting through the refuse the Philistines left behind in an attempt to better understand the ancient inhabitants of this city and their lives here in biblical times.

When biblical archaeology gets reported, it is usually the kind of dramatic individual find that grips the imagination — an important inscription, a striking piece of pottery or jewelry. But for archaeologists, those finds are marginal. Most of their work involves the meticulous sifting of soil and the cataloging of tiny details, none of which will ever reach the attention of the public, but which will slowly coalesce into a more complete picture of a lost world. For one month every summer, that is what happens here at Gath.

The Philistine metropolis on the border between Israel’s coastal plain and the inland hills is best known as the hometown of the warrior giant Goliath, who appears — until he is unexpectedly felled by the shepherd David and his sling — in the Book of Samuel. Since it began in 1996, the Gath excavation has become one of the country’s biggest digs and one known for experimentation with a unique array of scientific tools.

I joined the excavation team for a day this summer, arriving just after dawn as buses drove up from a nearby kibbutz with the workers – a largely volunteer crew of  Canadians, Israelis, Koreans, Americans, Hungarians, college professors, students, teenage Israeli soldiers and a few enthusiastic local 13-year-olds on their summer vacation.

I was issued a trowel, pickax and dustpan and assigned to one corner of a Philistine room in Area D, a rectangular depression dug into what was once the Lower City of Gath – an extension of the city located north of the great tel upon which the main part of the city once sat. 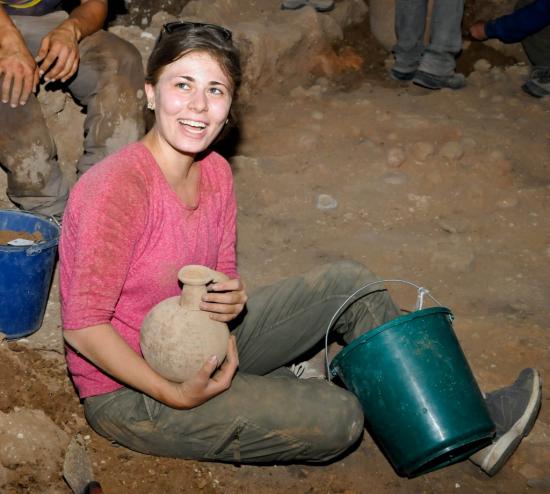 A digger at Gath. With 150 workers and a unique array of scientific tools, the dig has become one of the country’s leading excavations (photo credit: Courtesy of the Tell es-Safi/Gath Archaeological Project)

Ringing the entire site, still visible, are ancient siege fortifications built by an attacking army – probably that of the Aramean king Haza’el, who, according to the Book of Kings, razed Gath in 830 BCE.

Digging next to me was Raisa Quintanilla, 24, a student from the University of Toronto. She was carefully loosening a layer of soil and listening to trance music on a pair of tiny white earphones. Quintanilla had been digging for weeks, but the days spent on her knees brushing away dirt appeared not to have deadened her sense of why she was here.

“You hear all these stories from the Bible, but now you’re actually touching a place that seemed to you like a fairy tale,” she said.

In another room behind us, the 13-year-old Israelis were hacking away happily with tools. “I really like history,” said David Roiterstein, 13, of Efrat. “I love to find things – I’ve found pots, and bones. And using the pickaxe is fun – it feels like in the movies. Sometimes in my head I can hear the Indiana Jones theme song.”

Not far away, other volunteers removed a complete clay vessel the size of a large pumpkin. It had just emerged from the ground, intact and undamaged, nearly 3,000 years after it was concealed.

Pottery is the key to understanding the site, because the clay shards that litter the soil can be used to date the archaeological layers and often offer other interesting fragments of information. One delicate black jug just unearthed elsewhere at Gath, for example, had been imported from Cyprus; a similar jug found earlier was found to contain traces of opium.

The Philistines, who controlled the coastal plain three millennia ago and clashed, on occasion, with the Israelites of the hill country, are known chiefly as the bad guys of the Hebrew Bible. But the finds here are helping scholars draw a more detailed picture of who they were.

The Philistines originated in the Aegean and arrived here by sea around 1200 BCE, establishing city states at Gath, Ashdod, Gaza, and elsewhere. Some of their pottery shows signs of their origins around Greece, and their names and those of some of their gods retained Greek roots.

But the pottery found here, and small details like the shapes of their hearths and the kind of metals they used, increasingly show that the idea that the Philistines arrived from one place at the same time probably isn’t true. Their hearths resemble ones found in Cyprus. They used waterproof plaster of a kind found on Crete. They came from different places around the Aegean, arrived at different times, and mixed with the local Canaanites, creating a hybrid culture that combined foreign and native influences.

“The clear lines of the old days are getting blurry,” said Aren Maeir of Bar-Ilan University, the excavation leader.

The accumulation of small and unspectacular finds, in other words, adds up to something that is dramatic after all — a richer and more complicated portrait of the past. 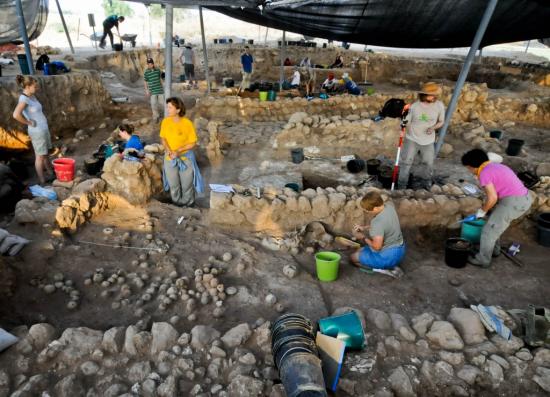 Not far away, a chemist was investigating a nearly imperceptible white film on soil – traces of wheat that was stacked on the floor of an ancient room. An American volunteer picked 3,000-year-old olive pits from the soil with tweezers, and Steve Weiner, a Weizmann Institute biologist, used an infrared spectrometer to check if soil underneath the pits showed signs of fire. (It did, suggesting the spot might have been a hearth.) Also at the site that day were botanists, anthropologists, and experts on ancient agriculture and pottery.

Later, after the excavation season ends, the finds will be processed into something comprehensible, and theories will be produced about how all of the details fit together. But a dig site during an excavation is a jumble of strange and often incomprehensible details. Where I was digging at Area D, for example, some of the workers were excavating a large and odd circular depression in the floor of a rectangular room. No one has any idea what it is. Nearby were dozens of clay loom weights, indicating some kind of weaving activity. A few steps away was the spot where last season someone stumbled upon an ancient stone altar with two horns. In another room, Liora Kolska Horwitz, an archaeozoologist from Hebrew University, was investigating the remains of a cow. The cow consisted of a skeletal head placed on top of its four limbs. There was no body.

Horwitz removed the bones and wrapped them in tinfoil. Back at the lab, she would be able to investigate the age of the cow, how it was killed, what it ate, and whether it was local or imported.

“The animal was intentionally placed here – whether for ritual purposes or simply as rubbish I can’t tell yet,” she said.

Much of the work turns up nothing at all. My greatest find all morning was a shard of pottery that turned out, upon closer inspection, to be a clump of mud.

The diggers began the excavation here at Area D, some distance away from the main dig site, after noticing the faint remains of ancient structures in the ground, said Amit Dagan, the Area D supervisor. “When they’re walking, most people look forward,” he said. “We archaeologists look down.” They broke ground in 2007.

Dagan, also of Bar-Ilan University, is both head archaeologist in this area and also a kind of summer camp counselor for the young crew, dispensing cheerful advice and pep talks and running the occasional errand. He is here from sunrise, every day, at the hottest time of the year. He would rather do nothing else, he said.

“We are opening a time tunnel – you are standing in a Philistine house from 3,000 years ago,” he said. “Where else can you do that?”

The diggers’ energy slowed somewhat as the day – one of the hottest of a particularly hot summer – wore on. They took a break for a late breakfast of buns and cereal. Close to the end of work at 1 p.m., I finally found something – a round clay handle, part of a Philistine jug. I was the first human to touch it in three millennia.

It was rather unceremoniously placed in a plastic bucket. Dozens of similar pieces are found at Gath every day.

“Most of the information we get is what might be called the boring stuff – slow digging through layers in which we sometimes find something interesting,” said Maeir, the excavation leader. “But all of these seemingly boring parts of the puzzle are actually the main thing.”

The workers packed up their tools. The last loose dirt was swept into dustpans and dumped in buckets. Buses arrived, and Gath of the Philistines was abandoned and quiet again.

Back at the kibbutz, members of the crew sat in groups on the grass, chatting and washing the thousands of pieces of pottery found that day. Horwitz, the archaeo-zoologist, cleaned the bones and teeth of her ancient livestock. Maier walked among the workers, inspecting ceramics and offering encouragement.

This is his 17th season at Gath. There is, he said, no end in sight.

“Imagine a jigsaw puzzle with 10,000 pieces, but we have only 300, and we don’t have a picture of what the whole puzzle is supposed to look like. That’s what we do,” he said.