It may look like a fidget spinner, but this artifact is, in all likelihood, actually a mace-head. Credit: Courtesy of the Oriental Institute of the University of Chicago

A 4,000-year-old Mesopotamian artifact that looks just like a fidget spinner and that a museum labeled as a "spinning toy" for 85 years is actually — unexpectedly — an ancient weapon, curators told Live Science.

Museum curators noticed the error while enhancing the Mesopotamian Gallery at the Oriental Institute of the University of Chicago, where the triangle-shaped, baked-clay artifact is labeled as a "spinning toy with animal heads" from the Isin-Larsa period of Mesopotamia.

But though the object may look like a modern-day fidget spinner, museum curators recently realized that it was something else entirely: a mace-head.

The artifact dates to between 2000 B.C. and 1800 B.C. and was made in the ancient site of Tell Asmar, located in present-day Iraq. When researchers first published an analysis of the object, in 1932, they suggested it was a plaything, Kiersten Neumann, a curator and research associate at the Oriental Institute, told Live Science in an email.

"The excavators recognized that the object was unique, and they speculated it might be rotated and used in 'astrological divination,' suggesting the animals represented were a bull, [an] ibex and [a] lion," she said.

It's unusual for a mace-head to be made from baked clay; typically, they're crafted out of stone. But the object looks like other identified mace-heads, and its location is further evidence of its original purpose, she said.

"That our baked clay example was found in the area of a temple also supports that it is a mace-head, since they were considered weapons of the gods in the second millennium B.C.," Neumann said. 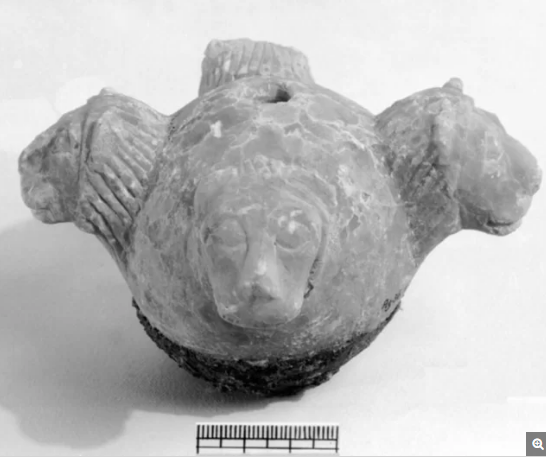 A different mace-head from the site of Tell Agrab, also located in modern-day Iraq. Credit: Courtesy of the Oriental Institute of the University of Chicago
Archaeologists have previously found toy artifacts from ancient Mesopotamia, including baked clay rattles, whistles, animal figurines and wheeled carts, but this object was likely not fashioned for the whimsy of children, Neumann said.

So why did museum researchers call it a toy in the first place?

The ancient weapon will soon be on display with other objects excavated from Mesopotamian temples, including votive statues, plaques, vessels and other mace-heads, Neumann said. But that hasn't stopped the Twitterverse from getting a kick out of the fidget spinner look-alike.

When the fidget spinner craze took off, people tweeted a picture of the artifact, and just on Monday (July 31), Arielle Pardes, a senior associate editor at Wired, even jokingly tweeted, "Proof that there are no original ideas anymore. "