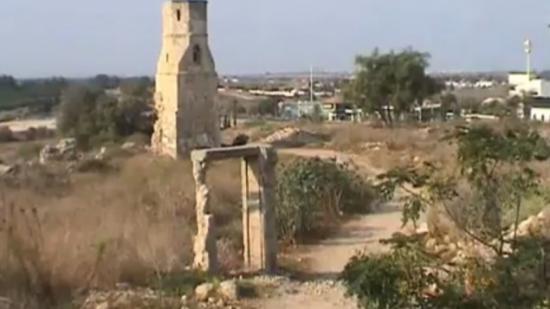 The archaeological site of Tel Yavneh, a few hundred meters away from the Philistine incineration pit where evidence of ritual use of different kinds of intoxicants and hallucinogens was found. (screen capture: YouTube)

The now-lackluster central Israeli town of Yavneh was apparently once the center of a thriving drug scene, according to Israeli researchers.

Cutting-edge technology has allowed archaeologists to find traces of hallucinogenic materials, used over 3,000 years ago by the biblical Philistine people for spiritual rituals, Haaretz reported Thursday.

Mind-altering potions and plants were commonplace in many ancient cultures, which believed that using the substances intensified the mystical experience of worshipers. In some cases, in which adherents had to endure physically painful ceremonies, the substances also served to numb the pain.

In an upcoming symposium in Jerusalem’s Hebrew University, aptly titled “Sex, Drugs and Rock ‘n’ Roll,” archaeologists will discuss the analysis of findings from an incineration pit in Yavneh that was discovered a decade ago.

The findings constitute the oldest known ritual use of the intoxicating Hyoscyamus plant, which has an effect on the body similar to that of alcohol.

Thousands of artifacts used for worship were found inside the Yavneh pit, including clay and stone bowls, some of which served to hold the intoxicating plants, as well as hallucinogenic substances such as nutmeg. According to archaeologist Raz Kletter, who dug up the ancient site in 2002, the pit was part of an Iron Age temple, Haaretz reported.

“Botanic material like flowers and plants do not survive so many years,” Dr. Devori Mandar of the Earth Science Institute at Hebrew University, where the findings were analyzed, told Haaretz. So the team looked for molecules “in the pores of the clay vessels.”

The research team were able identify molecules from plants belonging to the Hyoscyamus family, which were preserved in olive oil in their original form.

The hallucinogens, though, were more difficult to trace, since the material had deteriorated too greatly. “We presume that they included nutmeg, which is known as a hallucinogen, and used today to produce ecstasy,” Mandar said.

According to Mandar, the field of “sensory archaeology” is in its very early stages, and substantial knowledge is still lacking.