The Tel Yafo excavations in June and July 2013, directed by Aaron A. Burke and Martin  Peilstöcker, centered on the exposure of the intensively burned remains of the fourteenth century B.C. gate complex of an Egyptian fortress in Jaffa, Israel—the only Egyptian gate excavated in Israel to date. The extent of the burning attested within the gate complex was already evident during the 2012 season when a commemorative scarab of Amenhotep III dated to the mid-fourteenth century B.C. was discovered within the upper layers of the destruction, having fallen from what was likely a second story administrative office. 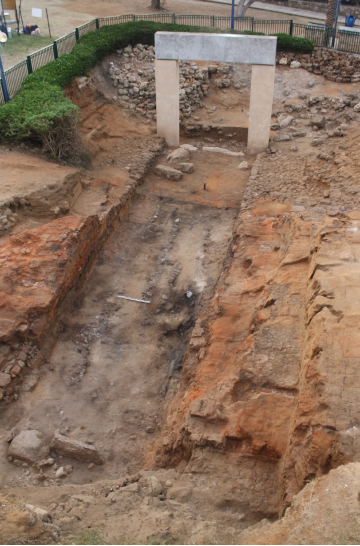 The 2013 excavations permitted the complete exposure of the gate’s passageway below more than 1.5 meters of accumulated destruction debris. Major finds included several arrowheads, a spearhead and lead weight, the antlers from at least four deer, decorative ivory inlays, thousands of seeds, a number of unique ceramic vessels, and nearly two dozen timbers belonging to the gate’s roof and upper story. While the arrowheads and spearhead may be indications of the battle to take the fortress before it was deliberately razed, the antlers strewn along one side of the passageway provide a glimpse into its appearance when it was in use. These artifacts suggest that the gate was not a stark and utilitarian space as many reconstructions of Egyptian gates suggest. Instead, it would seem that Egyptian soldiers hung these items within the passageway as trophies of their hunting around Jaffa.

The timbers recovered within the gate are likely cedars from Lebanon used in the construction of the gate’s second story and roof. These constitute the earliest and largest such samples of timbers from Israel to date. They will provide not only important chronological data such as evidence for the date of the construction of the gate complex but also will contribute to refining our understanding of the evolution of Egyptian rule in Canaan since the gate is one in a sequence of gates providing evidence for the earliest Egyptian fortress in Canaan. As important proxies for climate change, the timbers also offer a unique opportunity for an improved study of Late Bronze Age environment.

The discovery of the timbers was given even greater chronological significance because of the unusual preservation of thousands of seeds retrieved from the base of the destruction debris that will permit extensive radiocarbon testing. Among the seeds are barley, olive pits, grape pips, and chick peas charred black but identifiable to the naked eye on the floor of the gate. Such remains were unexpected in this context, given that monumental architecture does not frequently yield good evidence for the consumption practices of the inhabitants of a site. The seeds along with the artifacts recovered from the destruction within the gate reveal that Egyptian gate complexes were not exclusively defensive structures, but that they also served to house administrators, storerooms, and other support facilities.

The 2013 excavations were funded by the National Endowment for the Humanities as part of a project titled “Insurgency, Resistance, and Interaction: Archaeological Inquiry into New Kingdom Egyptian Rule in Jaffa” (RZ-51445-12). This program, which began in 2011, centers on understanding the nature of interactions between the ancient Egyptian garrison and the region’s populations by examining evidence for both conflict and social integration at the site that occurred between the foundation of the fortress in 1460 B.C. until the collapse of Egyptian rule in Canaan during the twelfth century B.C.

The Jaffa Cultural Heritage Project is a joint project of the University of California, Los Angeles (UCLA), the Johannes-Gutenberg Universitat, Mainz, and the Israel Antiquities Authority (IAA). The results from the 2013 excavations will be presented at the Annual Meeting of the Schools of Oriental Research in Baltimore, MD on November 21, 2013.