Discovered at Tel Tsaf in the Jordan Valley, one-of-a-kind vessel testifies to earliest agricultural rituals known in the ancient Near East

A unique 7,200-year-old clay silo model, the earliest evidence of ritual food storage, has been discovered during archaeological excavations at the prehistoric settlement of Tel Tsaf in Israel’s Jordan Valley.

The one-of-a-kind pottery vessel testifies to a previously undiscovered religious — and perhaps even political — side of food storage for this era in the ancient Near East, according to the international team of archaeologists from the University of Haifa and the German Archaeological Institute, Berlin. 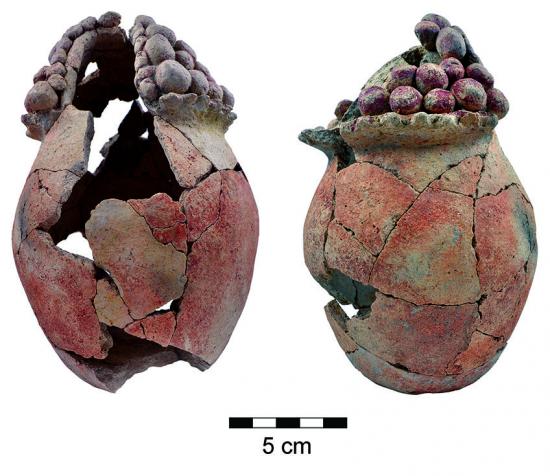 A 7,200-year-old model of a grain silo unearthed at Tel Tsaf in the Jordan Valley. (courtesy)

Decorated with red balls, the small clay silo is the only such vessel discovered anywhere and from any period, archaeologist Professor Danny Rosenberg of the Zinman Institute of Archaeology at the University of Haifa told The Times of Israel on Wednesday.

“It’s really uncommon and doesn’t look like any vessel we have,” said Rosenberg.

The vessel was found in pieces two years ago in a room which appears to be connected to a burial complex filled with an unprecedented number of the bases of large wheat and barley storage silos upon which were found thousands of millennia-old seeds. The vessel was recently reassembled, and is believed to be a model for the construction of the larger containers, as well as a ritual object.

Also found with the vessel pieces were ritual figurines and items of evident worth, including the earliest copper item found in the Levant and pieces made from obsidian.

Because of context in which the vessel was found and its uniqueness — clearly not a pot for everyday use — the archaeologists believe it was used for ritual purposes.

“The entire space was used for more than a domestic structure,” said Rosenberg.

Evidence of grain-storage rituals have been discovered in other ancient Near East societies, for example, in ancient Egypt or in Mesopotamia, however, this find at Tel Tsaf predates them by several thousand years, according to the archaeologists.

“The findings at Tel Tsaf are first evidence for the connection between food storage at a large-scale, and between the existence of a ritual related to the successful storage and preservation of the agricultural products being stored,” said Rosenberg.

The combined discoveries of the model and large grain silos may force archaeologists to rethink the organization of prehistorical society.

Roots of a changing early society

Settlement at Tel Tsaf, near the Jordan River and the modern state of Jordan, dates to circa 5200-4700 BCE. According to the international team of researchers, the site offers “ideal conditions to study changes in household economies and emerging social complexity during the formative stages of the Late Chalcolithic period.”

Discovery of large-scale food storage suggests that the ancient people had reached an early formative stage in the development of human society.

Excavations at Tel Tsaf have also unearthed well-preserved mudbrick architecture. the earliest metal item in the region, and evidence of long-distance trade.

The trove of grain silos represents “unparalleled evidence of storage” in the southern Levant at this time, said Rosenberg. “You have storage, but it’s usually more limited, for the nuclear family. In terms of scale, the amount of grain in each single unit is huge.”

Tel Tsaf was initially identified in the 1940s during a Beit She’an Valley archaeological survey. The first detailed excavation took place from 1978-1980, when findings from deep probe trenches suggested that there were two occupation periods at the site: the Pottery Neolithic period and the Early Chalcolithic period. Another set of excavations was undertaken in earnest between 2004 and 2007, and uncovered evidence of Middle and Early Late Chalcolithic settlement. 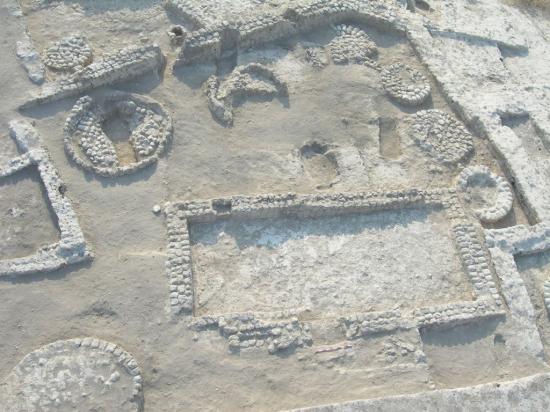 The current dig began in 2013 as a joint multidisciplinary project between the Zinman Institute of Archaeology at the University of Haifa and the Eurasian Department of the German Archaeological Institute in Berlin, under the leadership of Rosenberg and Dr. Florian Klimsha.

According to the Tel Tsaf Research Project’s website, among the dig’s main goals is the exploration of the Neolithic-Chalcolithic transition, through the study of household items, which point to the family unit’s economic status.

During the 2017 season of the Tel Tsaf excavation project, which took place between July 2-12, the archaeologists and volunteers attempted to reach the lower levels of the site, to better understand the origin of the village.

The archaeologists wrote in a recently published article in Antiquity Journal that, in addition to the important insights the model provides about the “symbolism related to grain storage, burial and the regeneration of life,” it also shows the first evidence of how the large “superstructure” grain silos may have been constructed.

The silo model and silos themselves exhibit “the early appearance of distinct strategies for controlling the means of production and for accumulating wealth-factors,” write the archaeologists. In other words, that wealth may be gained through the accumulation — and distribution — of a necessary product. The question the researchers are now debating is whether it was accumulated for individual or communal use.

“Something is going on in terms of people starting to store grain beyond their yearly needs,” said Rosenberg. He speculated that perhaps the surplus was produced so it may be exchanged in trade for pottery, or perhaps the obsidian items found at the site which come from the north or other far-away locations.

“We found one shell that comes from the Nile,” he said, a lot beads, and other finds that speak to non-local production.

For years, scientists have debated how the stratified cultures of ancient Egypt or Mesopotamia evolved. The Tel Tsaf finding of organized storage may be a step on the path to this understanding.

Once, scholars of the period considered the societies to be basically equal, “people have the same amounts of sheep and grain,” said Rosenberg. With these new finds, “suddenly there’s a sort of imbalance, it’s not equal any more.”

Rosenberg said that the evidence points to the fact that society was just at the beginning of the process of social hierarchy, but it’s a bit too early in the research to say conclusively.

Between the large-scale storage and the potential for rituals surrounding it, said Rosenberg, “we’re trying to understand the beginning of a process that eventually turned into the first cities.”