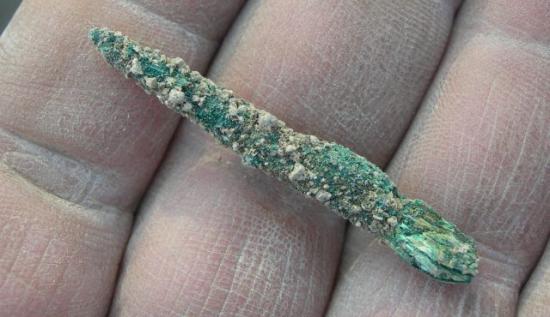 Researchers say an awl from the Middle Chalcolithic period (5200-4600 BCE) is the oldest metal object ever found in the Middle East.

The awl is made of copper and was found at excavations at Tel Tsaf in the Beit She’an Valley section of the Jordan Valley.

Chemical analysis dates the item back to the late sixth millennium or early fifth millennium B.C.E. Until now, researchers had believed that people in the area began to use metals only in the middle of the fifth century B.C.E.

“This moves back by several hundred years the date it was previously thought that the peoples of the region began to use metals,” said Dr. Danny Rosenberg of the University of Haifa. “This has a significant impact on our understanding of the developing use of complex technologies and the related social contexts.”

Tel Tsaf was first documented in the 1950s; excavations began there at the end of the 1970s. The area has repeatedly supplied valuable artifacts.

For example, large mud-brick buildings and silos for wheat and barley have attested to the community’s great wealth and long-distance commercial ties. 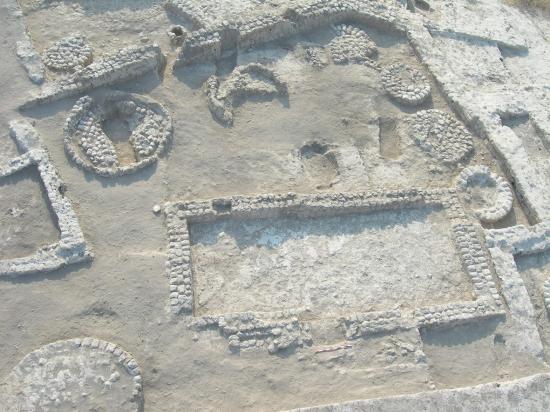 The dig site. Photo by Yosef Garfinkel
Roasting ovens show that large events were held. There have also been items made of obsidian — a volcanic glass with origins in Anatolia or Armenia — and shells from the Nile River and other areas around the Mediterranean.

The awl was found in 2007 by Hebrew University’s Yosef Garfinkel in a sealed grave of a woman about 40 years old. The grave was dug inside an abandoned silo, and around the woman’s waist was a belt made of 1,668 ostrich-egg shell beads.

The grave was covered with several large stones. “Its location within a silo testifies to both the importance of the deceased and the importance the community ascribed to the facility in which she was buried,” Rosenberg said.

But while the grave, the woman’s skeleton and the beaded belt were all previously reported in scientific journals, the awl has only been reported recently, after its chemical components were analyzed by Prof. Sariel Shalev of the University of Haifa Archaeology Department. The current excavations are being led by Rosenberg, in cooperation with Florian Klimscha of the German Archaeological Institute.

It still isn’t clear what the awl was used for.

“The appearance of the item in a woman’s grave, which represents one of the most elaborate burials we’ve seen in our region from that era, testifies to both the importance of the awl and the importance of the woman,” Rosenberg said. “It’s possible we’re seeing here the first indications of social hierarchy and complexity.”

The chemical examination of the metal shows that it probably came from the Caucasus, around 1,000 kilometers from Tel Tsaf.

“While the long-distance commercial ties maintained by towns in our region were already known from even earlier periods, the importing of a new technology combined with the processing of a new raw material from such a distant location is unique to Tel Tsaf,” Rosenberg said. “It provides additional evidence of the importance of this site in the ancient world.”